Brace Yourselves for El Niño Likely in 2019 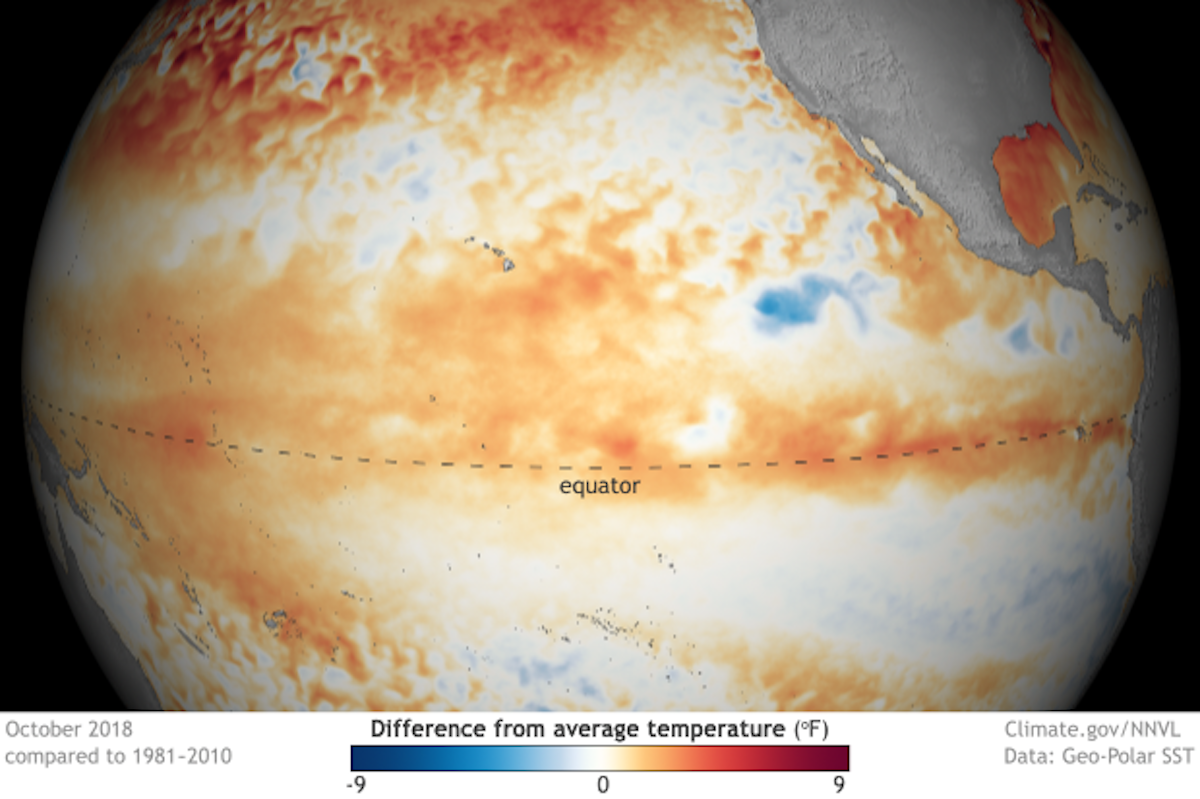 There is a 75-80 percent chance of an El Niño developing by February, the United Nations’ World Meteorological Organization (WMO)
announced Tuesday. So what exactly does that entail?

Well, the last time we had an El Niño was in 2015-2016, which caused
extreme weather-related events (droughts, fires, floods and coral bleaching) around the world, pushed atmospheric concentrations of CO2 to 400 parts per million for the first time, and drove 2016 to be the hottest year in recorded history.

Although this year’s forecasted El Niño is not expected to be as powerful as the one in 2015-2016, it’s not to be overlooked, weather experts warned.

New #ElNiño Update: 75-80% chance of El Niño within the next 3 months, although not expected to be a strong event. More information: https://t.co/RBO2NXsVql pic.twitter.com/u7j2u2DVcC

“It can still significantly affect rainfall and temperature patterns in many regions, with important consequences to agricultural and food security sectors, and for management of water resources and public health, and it may combine with long-term climate change to boost 2019 global temperatures,” Maxx Dilley, director of WMO’s Climate Prediction and Adaptation branch, said in a news release.

El Niños are naturally occurring phenomenons that happen every two to seven years. They have a major effect on global weather patterns, including spikes in temperatures.

Meteorologist and Grist columnist Eric Holthaus pointed out that El Niño could drive 2019 into becoming another unusually hot year:

“Since El Niño also works to warm the atmosphere, it’s possible that 2019 could beat 2016 as the warmest year on record. As El Niño begins to set in, both October and November have been unusually warm globally, and that trend is likely to continue, according to Zeke Hausfather, a climate scientist at University of California-Berkeley. ‘It’s not a safe bet 2019 will beat 2016, but it will very likely be warmer than 2018,” Hausfather told me.’

The WMO said the chance of a full-fledged El Niño event between December 2018 and February 2019 is estimated to be about 75-80 percent, and about 60 percent for it to continue through February to April 2019.

U.S. weather forecasters also said there’s a high chance of a El Niño forming. “Sea surface temperatures in the tropical Pacific were comfortably above the threshold for El Niño in October 2018, but the atmospheric response is lagging. A deep pool of warm water is available below the surface to renew and sustain the surface anomaly, however, and forecasters estimate an 80 percent chance of a weak El Niño during Northern Hemisphere winter 2018-19,” according to Climate.gov.

El Niños are not caused by climate change, but researchers have previously suggested that we could experience extreme El Niños more frequently as our planet continues to warm.

There is a weird talking point going around that temperatures have fallen dramatically in the past two years. This is not the case; 2017 was the second warmest year on record and 2018 will be the fourth, as things get back to normal after the 2016 super-El-Nino event: pic.twitter.com/eQsR8DibPY