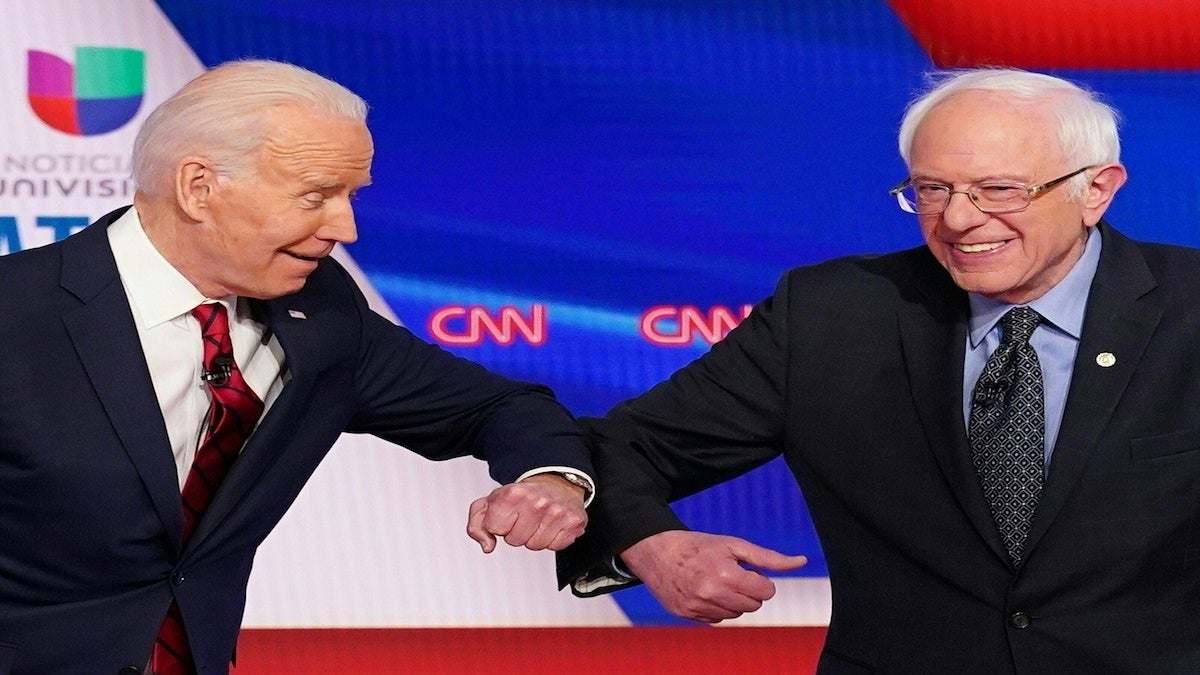 Democratic presidential hopefuls Joe Biden and Senator Bernie Sanders greet each other with a safe elbow bump before the start of the Democratic Party 2020 presidential debate in a CNN Washington Bureau studio in Washington, DC on March 15, 2020. Mandel Ngan / AFP / Getty Images

“We’ve moved the needle a lot, especially on environmental justice and upping Biden’s ambition,” said Sunrise Movement co-founder and executive director Varshini Prakash, a member of the Biden-Sanders Climate Task Force. “But there’s still more work to do to push Democrats to act at the scale of the climate crisis.”

The climate panel—co-chaired by Rep. Alexandria Ocasio-Cortez (D-N.Y.) and former Secretary of State John Kerry—recommended that the Democratic Party commit to “eliminating carbon pollution from power plants by 2035,” massively expanding investments in clean energy sources, and “achieving net-zero greenhouse gas emissions for all new buildings by 2030.”

“Of course, like in any collaborative effort, there are areas of negotiation and compromise,” said the New York Democrat. “But I do believe that the Climate Task Force effort meaningfully and substantively improved Biden’s positions.”

The Climate Task Force accomplished a great deal. It was an honor to serve as co-chair w/ Sec. @JohnKerry.

Among the notable gains: we shaved *15 years* off Biden’s previous target for 100% clean energy. https://t.co/pnLj7uufeg

The 110 pages of policy recommendations from the six eight-person Unity Task Forces on education, the economy, criminal justice, immigration, climate change, and healthcare are aimed at shaping negotiations over the 2020 Democratic platform at the party’s convention next month.

Sanders said that while the “end result isn’t what I or my supporters would’ve written alone, the task forces have created a good policy blueprint that will move this country in a much-needed progressive direction and substantially improve the lives of working families throughout our country.”

“I look forward to working with Vice President Biden to help him win this campaign,” the Vermont senator added, “and to move this country forward toward economic, racial, social, and environmental justice.”

Biden, for his part, applauded the task forces “for helping build a bold, transformative platform for our party and for our country.”

“I am deeply grateful to Bernie Sanders for working with us to unite our party and deliver real, lasting change for generations to come,” said the former vice president.

On the life-or-death matter of reforming America’s dysfunctional private health insurance system—a subject on which Sanders and Biden clashed repeatedly throughout the Democratic primary process—the Unity Task Force affirmed healthcare as “a right” but did not embrace Medicare for All, the signature policy plank of the Vermont senator’s presidential bid.

Instead, the panel recommended building on the Affordable Care Act by establishing a public option, investing in community health centers, and lowering prescription drug costs by allowing the federal government to negotiate prices. The task force also endorsed making all Covid-19 testing, treatments, and potential vaccines free and expanding Medicaid for the duration of the pandemic.

“It has always been a crisis that tens of millions of Americans have no or inadequate health insurance—but in a pandemic, it’s potentially catastrophic for public health,” the task force wrote.

Dr. Abdul El-Sayed, a former Michigan gubernatorial candidate and Sanders-appointed member of the Healthcare Task Force, said that despite major disagreements, the panel “came to recommendations that will yield one of the most progressive Democratic campaign platforms in history—though we have further yet to go.”

We rein in #pharma's greed by:

Observers and advocacy groups also applauded the Unity Task Forces for recommending the creation of a postal banking system, endorsing a ban on for-profit charter schools, ending the use of private prisons, and imposing a 100-day moratorium on deportations “while conducting a full-scale study on current practices to develop recommendations for transforming enforcement policies and practices at ICE and CBP.”

Marisa Franco, director of immigrant rights group Mijente, said in a statement that “going into these task force negotiations, we knew we were going to have to push Biden past his comfort zone, both to reconcile with past offenses and to carve a new path forward.”

“That is exactly what we did, unapologetically,” said Franco, a member of the Immigration Task Force. “For years, Mijente, along with the broader immigrant rights movement, has fought to reshape the narrative around immigration towards racial justice and to focus these very demands. We expect Biden and the Democratic Party to implement them in their entirety.”

“There is no going back,” Franco added. “Not an inch, not a step. We must only move forward from here.”