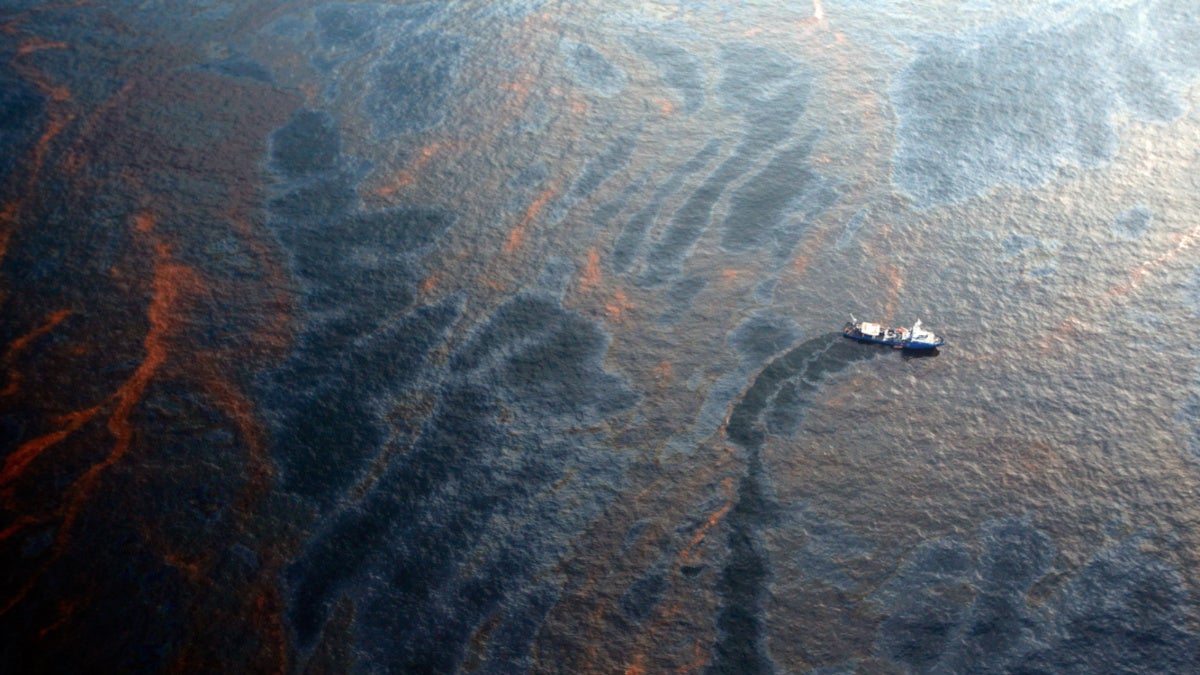 A boat works to collect oil that has leaked from the Deepwater Horizon wellhead in the Gulf of Mexico on April 28, 2010 near New Orleans, Louisiana. Chris Graythen / Getty Images

Nearly 10 years after the BP Deepwater Horizon oil catastrophe began in the Gulf of Mexico, a leading ocean conservation group warned Tuesday that the threat of another similar disaster looms large and that the fossil fuel industry and U.S. government have learned practically nothing from the world’s worst ever such disaster.

Oceana’s new publication—titled “Hindsight 2020: Lessons We Cannot Ignore from the BP Disaster“—provides a broad look at what led up to the “preventable tragedy,” the ongoing ecological and economic consequences of the disaster, and how the spill failed to act as a wake-up call on the inherent dangers of offshore drilling.

“Offshore drilling is still as dirty and dangerous as it was 10 years ago,” said Diane Hoskins, Oceana campaign director. “If anything, another disaster is more likely today as the oil industry drills deeper and farther offshore. Instead of learning lessons from the BP disaster, President Trump is proposing to radically expand offshore drilling, while dismantling the few protections put in place as a result of the catastrophic blowout.”

By pulling together information from a number of sources—including government documents, scientific studies, and interviews with Gulf Coast residents and policy experts—the report conveys a chilling reality: It’s not a question of another offshore oil spill happening, but simply when.

“What we found was disturbing,” says the report.

While the date of the disaster—April 20, 2010—is well in the rear view mirror, the consequences are not.

“Nobody was ready for this scale of pollution,” Nova Southeastern University Professor Tracey Sutton told Oceana. “As far as we know, the actual impact of the spill is not over yet.”

Among the impacts that are known are that as many as 800,000 birds died in the midst of and following the disaster. The oil gushing from the ocean floor also devastated bottlenose dolphins—over 75% of all dolphin pregnancies failed in the oiled area. The spill also ravaged frontline communities.

“They failed our people,” Clarice Friloux, who worked as outreach coordinator for the United Houma Nation during the spill recovery, told Oceana. “At one point, I remember thinking, ‘Wow, this could kill off a whole generation of Native Americans living off the coast of Louisiana.'”

Contributing to the threat of another Deepwater Horizon-like spill is that the fossil fuel industry has pushed for riskier drilling—further out and in deeper waters. Yet safety measures matching those riskier moves have not been rolled out.

The Trump administration, meanwhile, has done nothing to dampen the industry’s appetite for more drilling.

Instead of strengthening safety regulations, the industry and the Trump administration are dismantling the few protections put in place after the BP catastrophe. Without effective oversight and a more robust safety culture, another disaster at the level of Deepwater Horizon may be just as likely today as it was 10 years ago.

The report also points to the weak approach taken by the Bureau of Safety and Environmental Enforcement (BSEE)—a panel tasked with oversight of offshore drilling safety and was created in the year after Deepwater Horizon.

“The only significant thing that happened was that BSEE did issue a regulation around blowout preventer devices,” Cyn Sarthou, executive director of the New Orleans-based environmental policy organization Healthy Gulf, says in the report. “Under the new administration, they have rolled that back. Even that one regulation, which was very little … has now been rolled back.”

Simply put, the report states, “A decade later, the safety culture has not improved, and oversight of the industry remains deficient.”

Oceana’s report also points to Trump’s move to greatly expand offshore drilling which further paved the path for another disaster. To prevent a similar tragedy, the new report outlines a number of recommendations and called on Congress and the White House to:

“When they drill, they spill,” said Hoskins. “The BP disaster devastated the Gulf, and we cannot afford to repeat it. Protecting our environment has never been more important than it is today.”