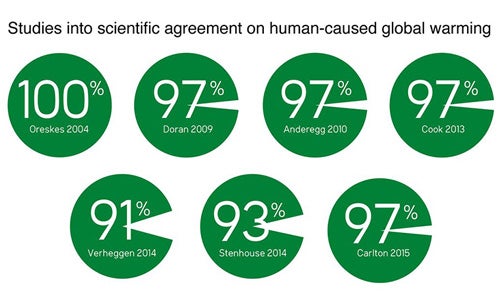 A new study confirms the expert consensus that humans are causing climate change, with a meta-analysis of research showing a convergence on the 97 percent agreement figure among climate scientists. We know how much deniers love questioning the scientific consensus, so we can only imagine how they will react to a consensus on the consensus. 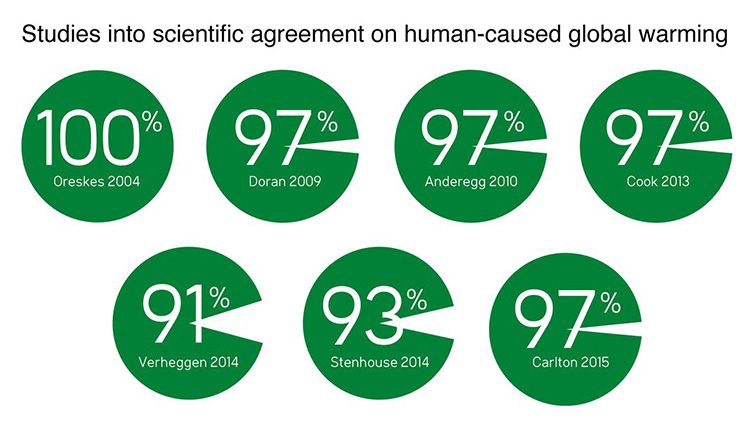 After years of attacks on John Cook’s 2013 paper finding a 97 percent consensus among climate change papers and experts, Cook pulled together a dream team of other consensus paper authors to reaffirm their collective findings. This new paper was actually written in response to the latest attack that (like previous ones) misrepresents the various consensus studies in order to portray Cook’s 97 percent as an outlier.

This brief history, as well as some “on the street” interviews with the public about what percentage of climate scientists they think agree on the cause of climate change, are described by Cook in a short video while his post at the Bulletin of Atomic Scientists also discusses some motives for attacking the consensus.

A variety of denier sources attacked these papers, clouding the public perception about the degree to which climate scientists are sure humans are causing climate change. One of those attacks spurred this particular paper, which shows the consensus between studies looking at the scientific consensus. So thanks to the constant denier attacks, we’ve reached Inception-esque levels of consensus.