Coconut Water: Is It All It's Cracked Up To Be? 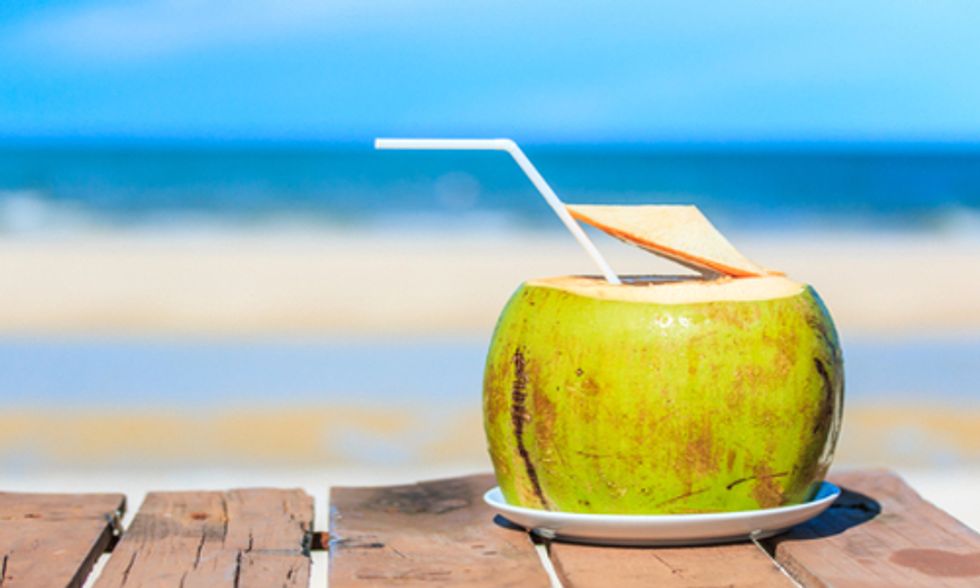 The mania for coconut water has been sweeping the country in the last few years, with the number of coconut water products on store shelves growing fivefold since 2008. It's been called nature's own sports drink: low in calories compared to most sweet drinks, packed with electrolytes like sodium and potassium, containing many useful vitamins and minerals. Is it really that good for you?

Coconut water is best sipped out of a young green coconut on a tropical beach. But it has health benefits anywhere if you know what to look for and what to avoid.
Photo credit: Shutterstock

In a word, yes. It's good for heart health, good for blood pressure balance, good for regulating body fluids. It's fat-free and cholesterol-free and contains antioxidants. But with the craze for coconut water and the over-the-top claims—it prevents cancer! it can stave off dementia! it can cure hangovers!—came the profiteers. And some companies are selling versions of the real thing that might have none of the health benefits and add some not-so-good things as well.

The good stuff comes from young, green coconuts, which are filled with water. As coconuts age, the water—and the nutrients—are absorbed into the meat of the coconut. So of course, the water from those coconuts can be cheaper for processing companies to buy. Not only does it have little of the nutrient value of young coconut water, it also loses some of its flavor, so that's when you see "natural flavors added" on the package. Chances are pretty good those will contain sweeteners too to improve the past-the-prime taste.

Fresh young coconut water has plenty of sugar in it so it doesn't require additional sweeteners. If sugar is an added ingredient, you don't want that either. And with the big beverage bottling companies that have been aggressive opponents of GMO labeling getting into the coconut water game, you probably want to take into account that some of that sweetener could be from GMO crops.

If it's from concentrate, it has been heated to reduce it to syrup, with water added prior to packaging. While the syrup is cheaper to ship than fully constituted water, the heating takes away most of its nutrients and enzymes—the reason you want to drink it in the first place.

The same thing applies to pasteurized coconut water. If it's in a bottle or box sitting out on the shelf, stop and think about how it can be there for a long period of time without going bad. The answer is it's been heated to kill bacteria—and all those enzymes, vitamins and minerals hat are good for you. If it's from concentrate AND pasteurized, it's been heated twice. So you're really not drinking anything useful anymore.

Food blogger Food Babe writes that there have been reports of whole coconuts dipped in formaldehyde, a proven carcinogen, to preserve them for shipping, which suggests the chemical might seep through the meat into the water. She says she circumvents this by buying hers at organic cafes that have their water shipped directly to them.

She also checked in with some of the big beverage companies that now make their own versions of coconut water to find out what exactly they were doing to, or putting in, the stuff. She's got a list of "Coconut Waters to Avoid at All Costs." Given that coconut water isn't cheap, you'll want to get the most benefit from it, so it's worth checking out.

The best way to drink coconut water? Lolling beachside at a tropical resort sipping from a straw stuck directly into a young coconut. But that's REALLY going to cost you!

Why You Should Drink Apple Cider Vinegar Every Day

How Much Water Should You Drink Per Day?