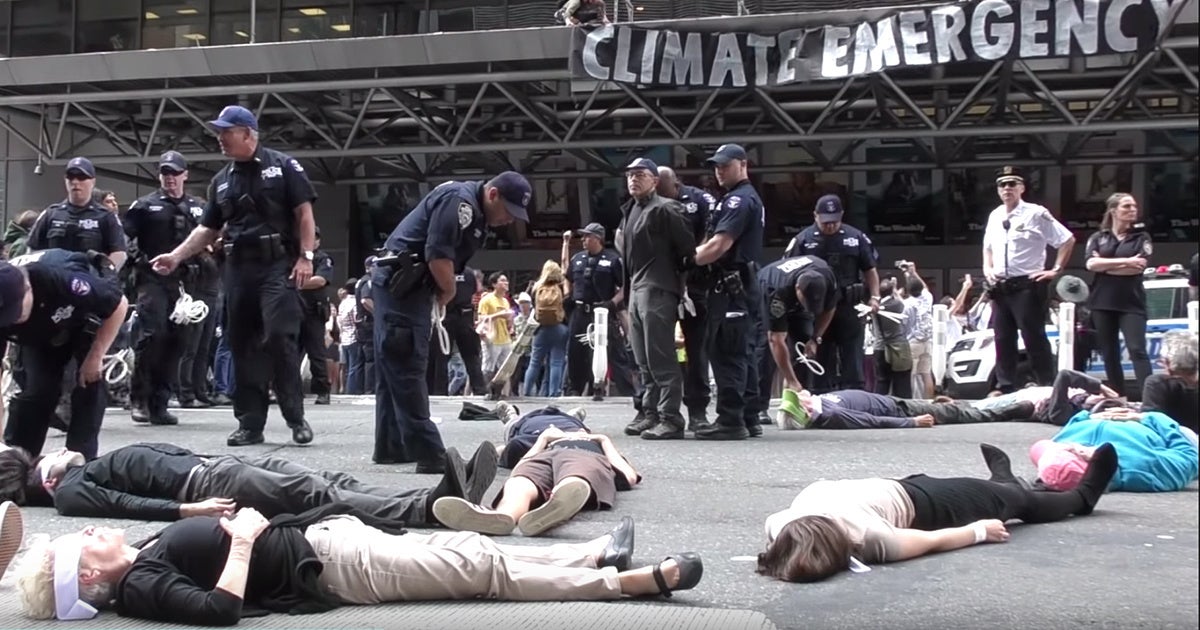 Seventy Extinction Rebellion protesters were arrested outside The New York Times building Saturday as they demanded the paper improve its coverage of the climate crisis, Reuters reported.

Protesters briefly blocked traffic on Manhattan’s Eighth Avenue, between the Times building and the busy Port Authority Bus Terminal, The Guardian reported. Demonstrators staged a die-in on the street outside the paper’s headquarters. They also attached banners to the two buildings. The one affixed to Port Authority read “Climate Emergency,” and the banner suspended from the Times building read “climate change = mass murder,” with “change” crossed out and replaced with “emergency,” Reuters reported.

“The lack of coverage of the climate crisis is completely unacceptable,” member of Extinction Rebellion’s press and fundraising teams Becca Trabin told The Guardian. “It’s a public safety crisis on a global scale.”

In total, 67 activists were taken into custody by the New York Police Department and three by Port Authority police, a spokesperson told Reuters.

In one incident, police arrested journalist Michael Nigro while he was photographing the protest from the third floor of the Port Authority building. A live-stream of his arrest was posted on YouTube by News2Share.

Breaking: Journalist (and friend of News2Share) Michael Nigro (contributor to SIPA, Getty) has been arrested by NYPD / New York Port Authority for photograph…

News2Share Editor-in-Chief Ford Fischer tweeted that Nigro was released Sunday, but that police kept his press badge, camera and phone.

“I was arrested for committing an act of journalism and then, because of that act, had the very tools I use to report and make a living taken from me,” Nigro said in a statement shared by Fischer. “This is troubling not just specifically for journalists, but it pollutes our democratic society in general.”

Protester Donna Nicolino told The Guardian why she was willing to risk arrest.

“We want the New York Times as well as all the other media to treat climate change as the crisis it is,” she said.

The protest comes around a month after The Guardian updated its style guide for environmental reporting to reflect the urgency of climate change. The paper said it would replace “climate change” with “climate emergency, crisis or breakdown”and refer to “global warming” as “global heating.”

“There is no national news organization that devotes more time, staff or resources to producing deeply reported coverage to help readers understand climate change than The New York Times,” Rhoades Ha told The Guardian. “We fully support this group’s right to express their point of view, even when we disagree with it as it relates to our coverage.”

But Extinction Rebellion spokeswoman Eve Mosher told CNN that even though the New York Times did “good reporting” it did not cover the issue with the appropriate seriousness.

“They should be treating it like World War II,” Mosher said, “where there were headlines every day.”