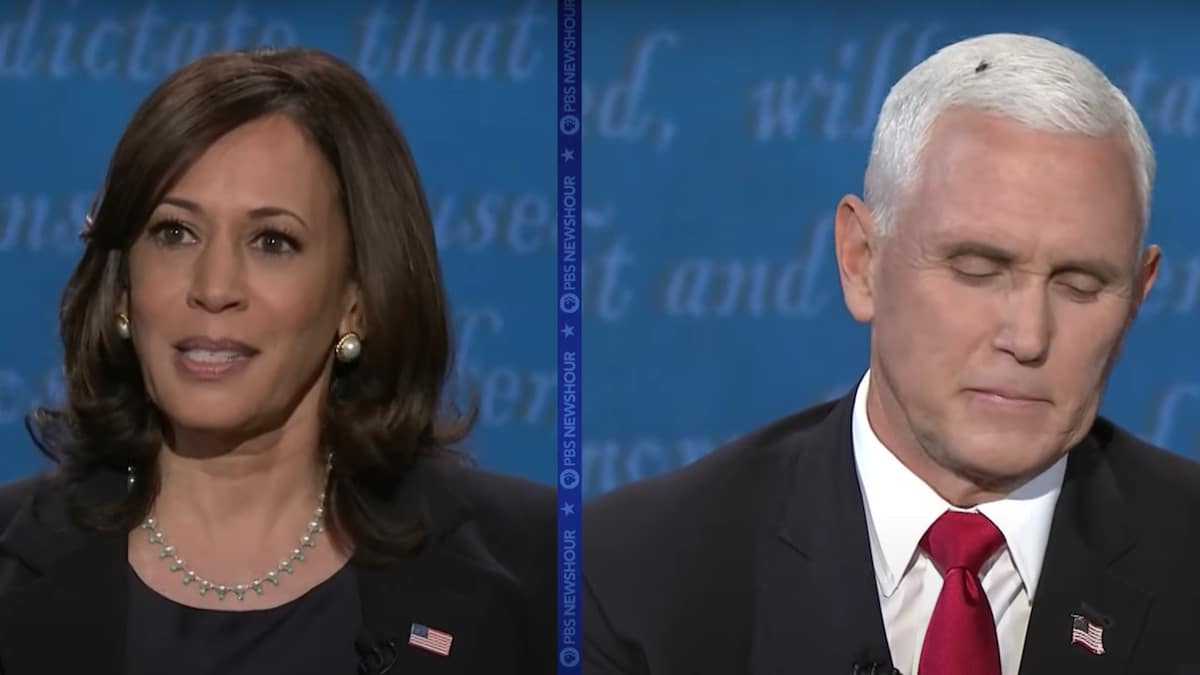 The first question about the climate crisis came about 40 minutes into the debate when moderator Susan Page turned to Pence and brought up the record number of hurricanes and wildfires in 2020. She then asked if he agreed with the scientific consensus that man-made climate change is making hurricanes and fires larger and more dangerous.

Pence did acknowledge that the climate is changing, but he would not say that human activity is causing it. He insisted that the Trump administration would listen to the science before pivoting to attack both the Paris agreement and the Green New Deal.

In her reply, Harris insisted that Joe Biden believes in science. She drew a contrast with President Trump who has questioned science.

“We have seen a pattern with this administration, which is they don’t believe in science,” Harris said while looking straight at the camera.

She brought up that when Trump met with California Gov. Gavin Newsom in September, Trump said about global warming, “I don’t think science knows, actually,” as EcoWatch reported at the time.

Pence argued that the country has lowered CO2 emissions through hydraulic fracturing, or fracking, and through innovation. Pence then claimed that Biden and Harris wanted to ban fracking.

“I will repeat, and the American people know, that Joe Biden will not ban fracking,” Harris said in her reply. “That is a fact.”

The issue of fracking is something Pence glommed on to in what analysts see as a direct plea to voters in Pennsylvania where the oil and natural gas industry is prominent, as TIME reported.

Harris, in her rebuttal, noted that clean energy infrastructure is actually part and parcel of an economic recovery, pointing out that Moody’s said Biden’s plan will create 7 million more jobs than Trump’s plan.

“Joe Biden has been very clear that he thinks about growing jobs,” she said. “Part of those jobs that will be created by Joe Biden are going to be about clean energy and renewable energy.”

Pence also refused to attribute the wildfires and the increased moisture and slow movements of hurricanes to human activity. As the moderator attempted to enforce Pence’s time limit, he argued that there are no more hurricanes than there were 100 years ago. Prior to that, he addressed the wildfires.

“With regard to wildfires, President Trump and I believe that forest management has to be front and center, and even Gov. Gavin Newsom from your state has agreed, we have to work on forest management,” Pence said.

He neglected to mention that nearly 60 percent of California’s forests are on federal land, as KGO, San Francisco’s ABC affiliate, reported.

When Harris replied, she brought up the wildfires currently burning, the plight of the Gulf Coast as Hurricane Delta approaches, and the Iowa farmers whose fields were flooded by a derecho storm.

She segued from there to attack the Trump administration’s hostile attitude towards science, noting that the terms “science” and “climate change” were removed from a government website about energy and the environment.

“Let’s talk about who is prepared to lead our country over the course of the next four years on what is an existential threat to us as human beings,” she emphasized.

When asked directly by Page if the climate crisis is an existential threat, Pence dodged the question and started to discuss taxes.