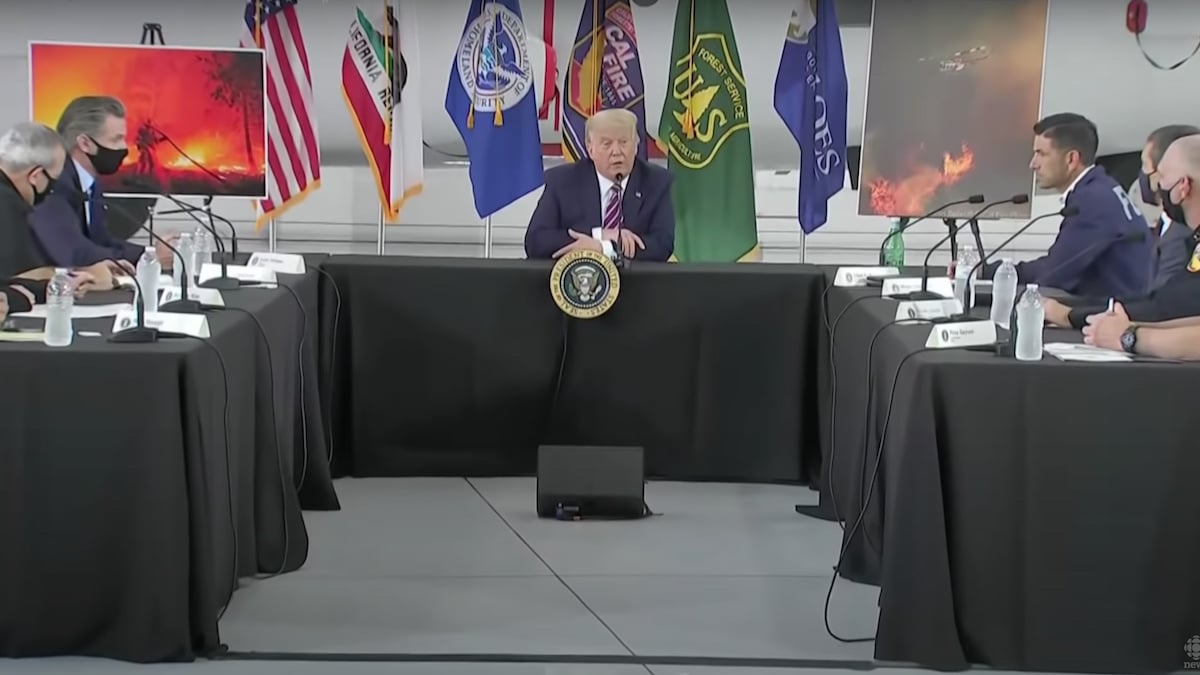 The climate crisis has wedged its way into the presidential campaign as President Trump, who has barely mentioned the fires raging on the West Coast, visited California on Monday. When pressed on global warming, Trump told a briefing, “I don’t think science knows, actually.”

In the meantime, former Vice President Joe Biden, who has campaigned while observing social distancing, called the president a “climate arsonist” from a museum in his home state Delaware, as The New York Times reported.

Trump has claimed that the fires were caused by California’s mismanagement of forests, even though most of the fires have started and burned on federally owned lands, not state forests.

On the way to Monday’s briefing near Sacramento with California Governor Gavin Newsom and other top Democratic officials, Trump once again blamed forest mismanagement as the issue.

“When trees fall down after a short period of time, they become very dry — really like a matchstick,” Trump said, as The New York Times reported. “And they can explode. Also leaves. When you have dried leaves on the ground, it’s just fuel for the fires.”

Then he had this exchange during the briefing, as The Hill reported.

Newsom: “We obviously feel very strongly the hots are getting hotter, the dries are getting dryer. Something has happened to the plumbing of the world and we come from a perspective, humbly, where we submit the science in and observed evidence is self-evident that climate change is real and that is exacerbating this.”

Wade Crowfoot, secretary of the California Natural Resources Agency, then warned against putting one’s “head in the sand” by ignoring what the data and the science say is happening due the climate crisis.

Crowfoot: “I wish science agreed with you,”

Trump did not explain his thoughts or pontificate further on what science does and doesn’t know, For millions of Americans, the effects of the climate crisis are difficult to ignore. Another hurricane is headed for the Gulf Coast, which is still recovering from Hurricane Laura a couple of weeks ago. The Southwest saw a record stretch of triple-digit temperature days. On the West Coast, the raging fires have consumed millions of acres and have made the air hazardous to breathe in several cities.

From Delaware, Biden gave a speech where he spoke of his own proposed climate crisis policies and called Trump a “climate arsonist.” Biden drew a connection between Trump’s handling of climate-crisis issues and his mismanagement of the COVID-19 pandemic and racial tension roiling through the country, as The Washington Post reported.

“Donald Trump’s climate denial may not have caused these fires and record floods and record hurricanes,” Biden said, according to The Washington Post. “But if he gets a second term, these hellish events will continue to become more common, more devastating and more deadly.”