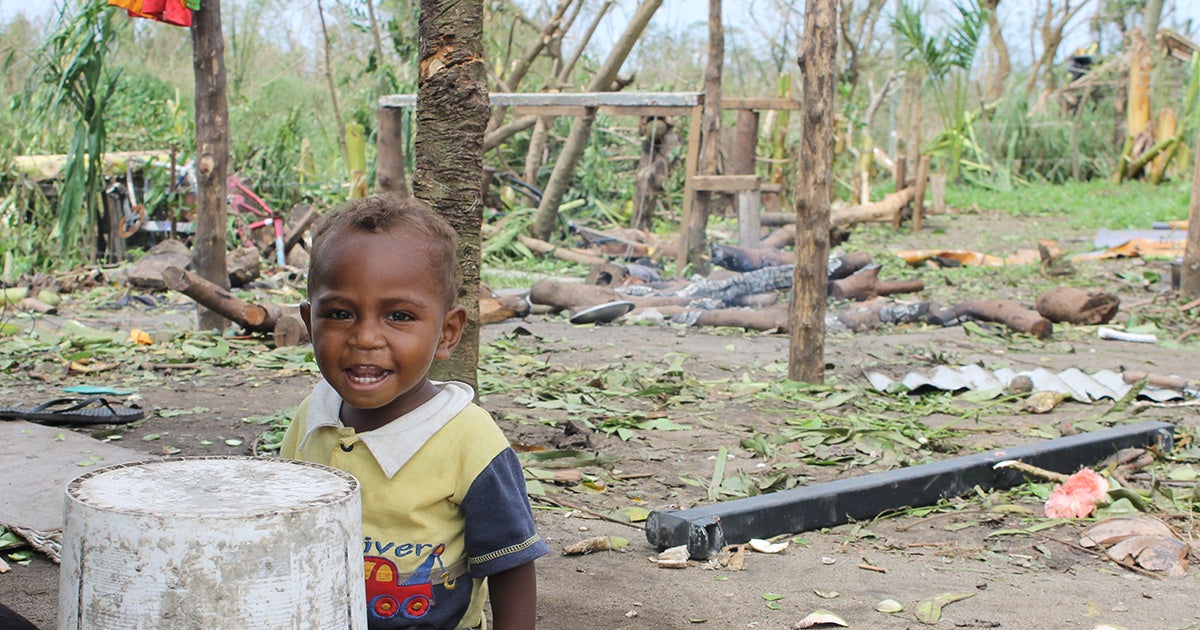 In this handout image provided by UNICEF, a young boy from the Taunono community, looks on after the community was completely destroyed by Cyclone Pam, on March 17, 2015 in Port Vila, Vanuatu. UNICEF / Getty Images

A bleak new report highlights how the climate crisis is responsible for deaths and will cause more in the coming decades, along with malnutrition, stunted growth and lower IQs in children directly impacted by the crisis, as the Guardian reported.

The policy report From Townsville to Tuvalu produced by Global Health Alliance Australia in partnership with Monash University in Melbourne looked at how the climate crisis will affect the Asia Pacific Region, the effect it has already had and it makes recommendations for what the Australian government can do to mitigate its impact.

Australia has seen fatalities within the last decade due to extreme weather and heat waves.

“There are absolutely people dying climate-related deaths, [especially due to] heat stress right now,” said Misha Coleman, executive director of Global Health Alliance Australia, to the Guardian. “During the Black Saturday fires [in Victoria in 2009] for example, we know that people were directly killed by the fires, but there were nearly 400 additional deaths in those hot days from heat stress and heatstroke.”

It has also seen a cognitive effect on children who experienced extreme weather events in utero. For example, children born to women who were pregnant during 2011 flooding in Brisbane had, on average, lower IQs, smaller vocabularies and less imagination than their peers at age two.

As the world deals with higher concentrations of greenhouse gasses, the nutritional values of staple crops will decline, leading to stunting, anemia and malnutrition in children, within 10 to 20 years, according to the Guardian.

“What’s the future for our children?” said Coleman to the Guardian. “These events are more common, more frequent and not going to become less so in a short amount of time.”

The researchers behind the report looked at nearly 120 peer-reviewed articles to piece together the impact the climate crisis will have on the region. The paper pointed out that the spread of rare tropical diseases might become prevalent as the diseases find favorable conditions in Australia, such as the Nipah virus, a bat-borne disease that causes fatal infections in humans and pigs in South East Asia.

The paper also warns that the Australian health care system will be overwhelmed if climate refugees seek help there because nearby countries have inadequate healthcare systems to handle a spike in sickness due to a climate emergency.

The report highlighted a 2018 paper put out by the World Health Organization that predicted “between 2030 and 2050 climate change will cause an additional 250,000 deaths per year from heat stress, malaria, malnutrition and diarrhea,” according to the report. It pointed that the various consequences of the climate crisis will not create new diseases, but will amplify existing ones and overburden health care systems.

The Global Health Alliance Australia paper leaned heavily on the WHO’s categories of health risks from the climate crisis, which are:

• Direct impacts from the increased frequency and severity of extreme weather

The second two bullet points are the insidious dangers that Global Health Alliance Australia says the Australian government should prepare for.

“Severe weather events are causing flooding, particularly in informal settlements in the Pacific, that leads to diseases including diarrhea, that can be very serious and fatal in people, particularly children,” said John Thwaites, chair of the Sustainable Development Institute at Monash University, as the Guardian reported.

In addition to Nipah virus, the report warned that mosquitos would spread dengue, chikungunya and zika, as the global temperatures warm and mosquito populations expand their reach. In fact, Q fever is already prevalent in Townsville, a city in northeastern Queensland.

“Q fever is something that is carried by a lot of wild and domesticated animals,” said Coleman to the Guardian. “As climate change degrades their habitat through fires and drought, these animals go looking for green grass and fresh water [and] they find themselves on golf courses and on retirees’ two-acre blocks.”