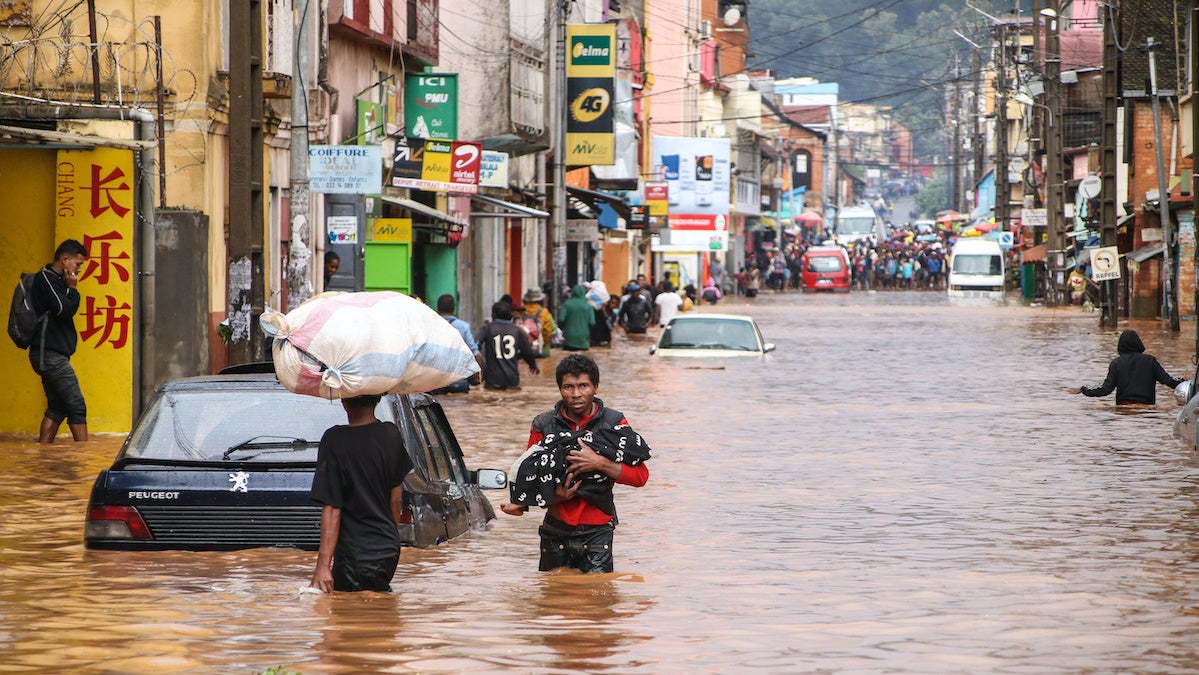 A resident walks carrying a child through floodwaters on a road in Antananarivo, Madagascar on Jan. 8, 2020, after heavy rainfall. MAMYRAEL / AFP via Getty Images

In its 15th Global Risks Report published on Wednesday, the World Economic Forum (WEF) has said that for the first time in the report’s history, all of the “top long-term risks by likelihood” are environmental. While in the previous decade economic and financial crises were seen as most dangerous, the report has found that risk perceptions have shifted to extreme weather, environmental disasters, biodiversity loss, natural catastrophes and failure to mitigate climate change.

“Climate change is a very real and serious threat to society,” said Alison Martin, a senior member of Zurich Insurance Group, who helped compile the publication, alongside consultancy Marsh & McLennan and a number of renowned universities from across the world.

“Extreme weather events such as heat waves and flooding are becoming more commonplace and severe, leaving communities to deal with often devastating humanitarian and economic costs,” she added. 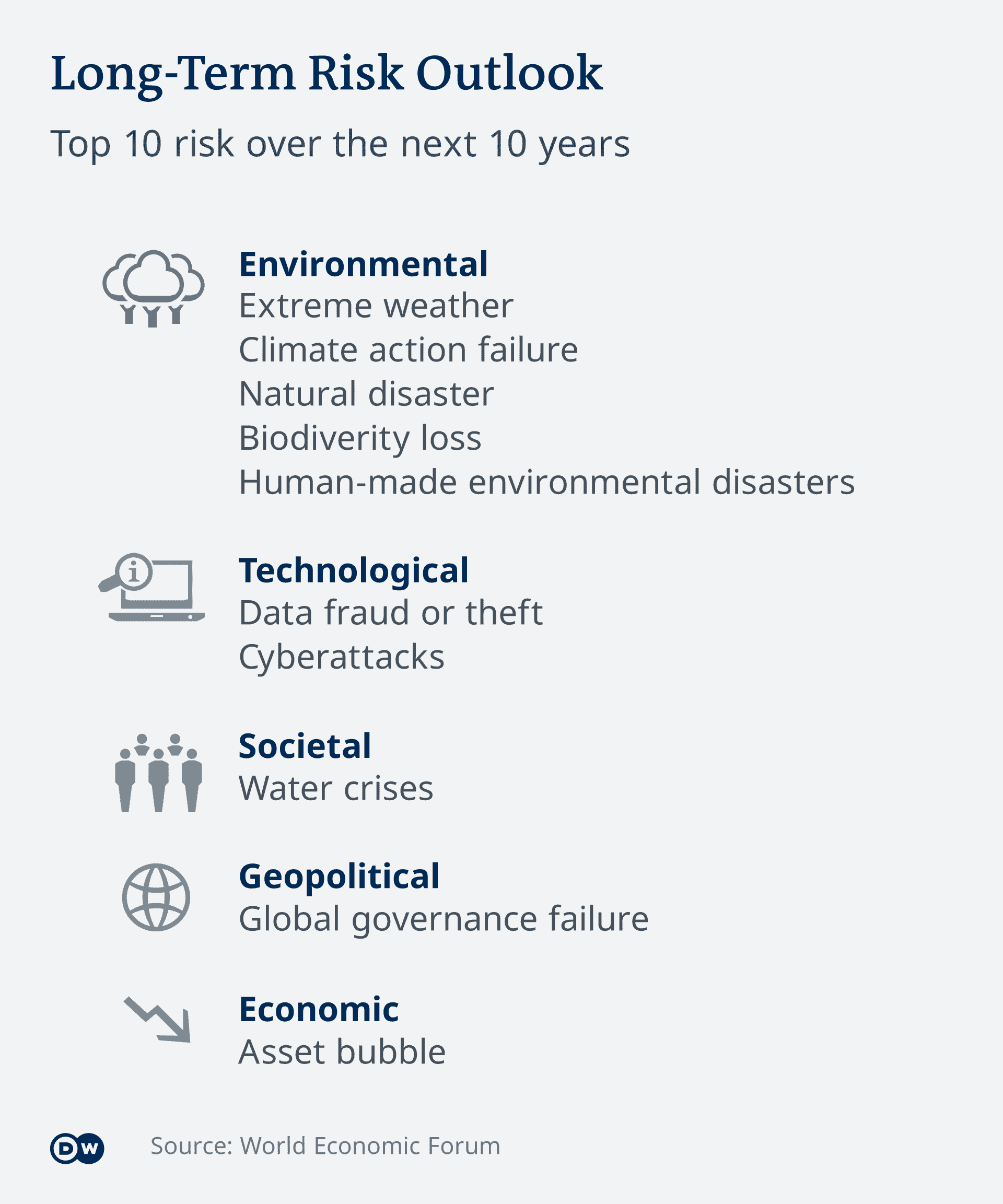 WEF is an international organization focusing on cooperation between the public and private sectors, and brings together business leaders, government policymakers and representatives of civil society to foster global deliberations on burning issues.

Published in the run-up to the WEF’s 50th anniversary meeting in Davos later this month, the report surveyed the opinions of more than 750 global experts and decision-makers to rank their biggest concerns in terms of likelihood and impact.

Among the short-term risks facing mankind already in 2020, three out of four respondents to the survey cited economic confrontations, political polarization, extreme heat waves, destruction of natural resource ecosystems and cyberattacks as the most pressing ones. 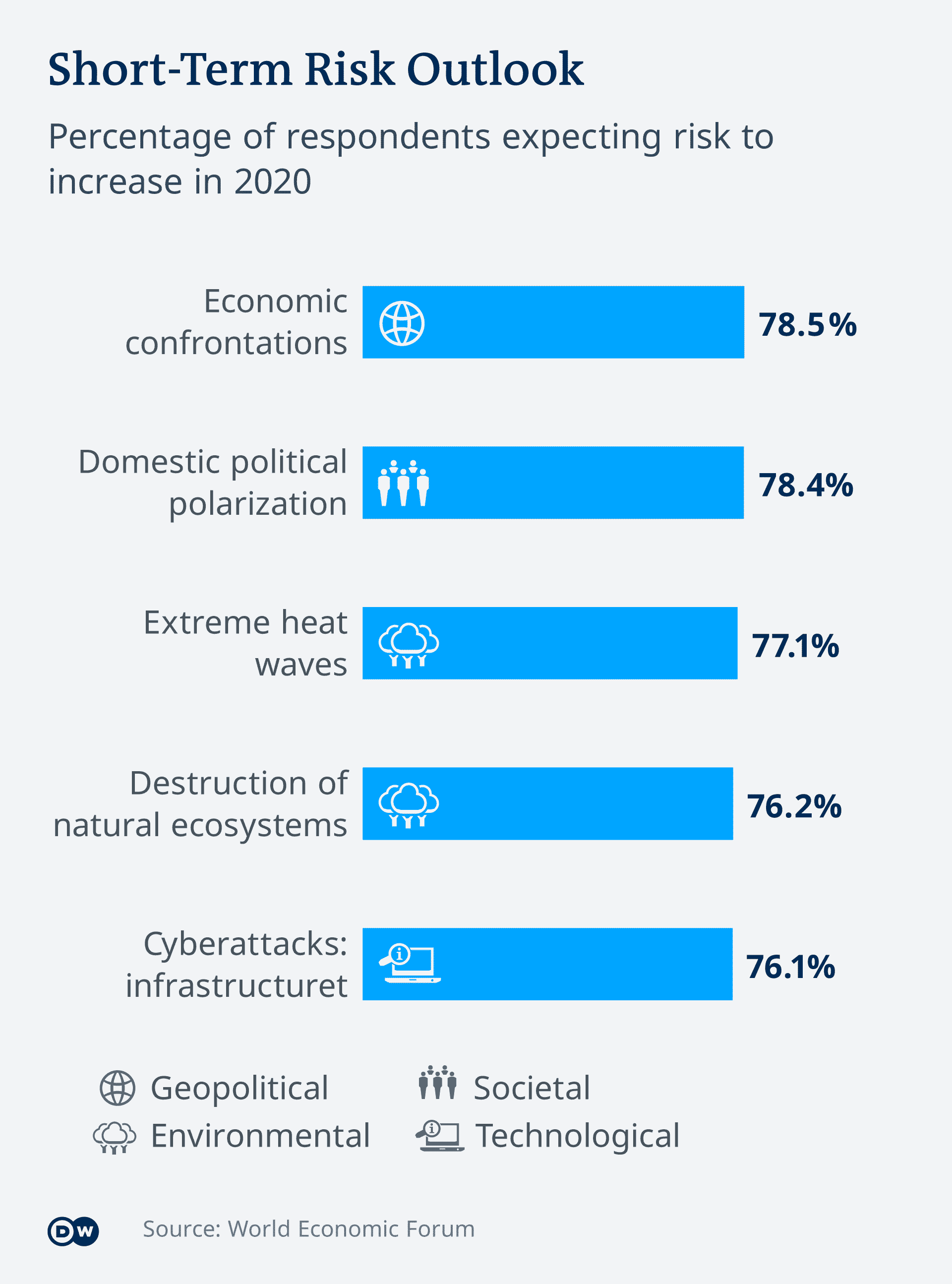 WEF describes the world we live in as rife with “geopolitical and geoeconomic uncertainty.” Powerful economic, demographic and technological forces are shaping a new balance of power, in which states are increasingly viewing opportunities and challenges through “unilateral lenses.”

As a result, alliance structures and multilateral systems are threatening to collapse under the pressure of “nationalist postures in pursuit of individual agendas and economic decoupling.”

WEF President Borge Brende noted in the report that renewing the architecture of multilateral political and economic systems was “this generation’s defining task.”

“It will be a monumental undertaking, but an indispensable one. The Global Risks Report demonstrates how high the stakes are,” he wrote, adding that hopes for the global system to simply “snap back” was running the risk of missing “crucial windows” to address pressing problems.

Amid fraying global consensus about politics and economics, the WEF fears that 2020 will be marked by heightened economic confrontations and domestic political polarization, the report says.

In addition, weakening economic growth and rising financial inequality are increasing the risk of economic stagnation, while at the same time governments’ space to stimulate economies with monetary and fiscal policy is narrowing.

Amid this darkening economic outlook, people’s discontent with their political leaders is set to harden, leading to more public protests that are potentially weakening the ability of governments to take decisive action should a downturn occur.

But without economic and social stability, countries could lack the “financial resources, political capital or social support needed to confront key global risks.”

As the last five years have already been the warmest on record, climate change is expected to strike harder in the coming years, making weather-related disasters more intense and more frequent.

“The near-term impacts of climate change add up to a planetary emergency that will include loss of life, social and geopolitical tensions and negative economic impacts,” the report says, adding that failure of climate change mitigation and adaption is the No. 1 risk by impact and number two by likelihood over the next 10 years.

With it comes the loss of biodiversity — ranked as the second most impactful and third most likely risk for the next decade — which has critical implications for humanity due to the likely collapse of food and health systems and disruptions of entire supply chains.

While digital technology is bringing tremendous economic and societal benefits to much of the global population, the respondents to the WEF survey believe that unequal access to the internet, the lack of a global technology governance framework and cyberinsecurity are all posing significant risk.

This will “prevent the full potential of next generation technologies from being realized,” the report concludes.

In the field of public health care, threats to existing systems are mainly seen coming from “changing societal, environmental, demographic and technological patterns” that could undo the dramatic gains in wellness and prosperity.

Here, the report identifies the rise in, for example, cardiovascular diseases and mental illness, as well as the increasing costs from chronic diseases as threats to public health systems worldwide.

“As existing health risks resurge and new ones emerge, humanity’s past successes in overcoming health challenges are no guarantee of future results,” the report says.

WEF concludes its 2020 risks assessment by saying that “as the window of opportunity is closing, coordinated, multistakeholder action is needed quickly to mitigate against the worst outcomes.”