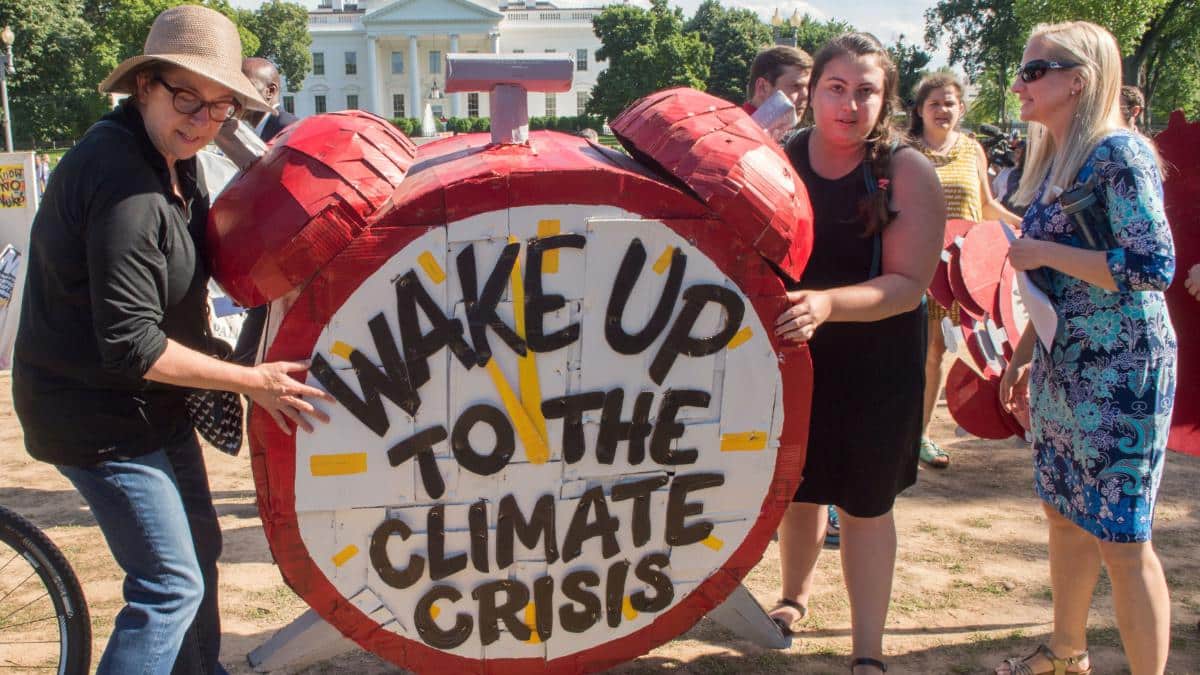 Protesters are seen during a demonstration in front of the White House in Washington, DC on June 1, 2017. Paul J. Richards / AFP / Getty Images

While some mainstream environmental organizations welcomed Tuesday’s introduction of the CLEAN Future Act in the House of Representatives, progressive green groups warned that the bill falls far short of what’s needed to meaningfully tackle the climate crisis—an existential threat they say calls for bolder action like the Green New Deal.

The latest version of the CLEAN Future Act—which aims to achieve U.S. carbon neutrality by the year 2050 —was introduced by Democratic Reps. Frank Pallone (N.J.), Bobby Rush (Ill.), and Paul Tonko (N.Y.). The bill sets an interim target of reducing pollution by 50% from 2005 levels no later than 2030.

In a statement, Pallone, who is chair of the House Energy and Commerce Committee, said that “the climate crisis is one of the greatest challenges of our lifetime, but it also presents one of the greatest opportunities to empower American workers with new, good paying jobs and return our economy to a position of strength after a long, dark year of historic job losses and pain.”

“Today’s introduction of the CLEAN Future Act promises that we will not stand idly by as the rest of the world transitions to clean economies and our workers get left behind,” added Pallone, “and that we will not watch from the sidelines as the climate crisis wreaks havoc on Americans’ health and homes.”

But while numerous people hailed the bill—with Earthjustice offering “applause” and NRDC calling it “urgently needed”—more critical voices from groups like Friends of the Earth and Food & Water Watch said the legislation is fundamentally and dangerously lacking.

BREAKING: Rep @FrankPallone just released his CLEAN Future Act — which he claims to be an ambitious bill to combat the climate crisis.

A bill that calls fracked gas a clean energy is a joke. This is a monumental failure of leadership from #FrackPallone.https://t.co/3fodkEwch5

Lukas Ross, program manager at Friends of the Earth, called the bill’s introduction “a monumental failure of climate leadership.”

“Chairman Pallone had over a year to remove fossil fuels from the CLEAN Future Act and didn’t bother to reconsider,” Ross said in a statement, referring to the bill’s previous iteration. “A clean energy standard that qualifies fracked gas is a joke. We need real solutions like solar and storage, not a dirty lifeline for gas, nukes, and biomass.”

Brett Hartl, government affairs director at the Center for Biological Diversity, told The Hill that while the new bill “improves on last year’s abysmal proposal,” the nation must “slash emissions 70% in 10 years, and we need firm cuts in greenhouse gases right now, not just gimmicky incentives, or future generations will suffer from our inaction today.”

Mitch Jones, policy director at Food & Water Watch, said in a statement that “Democrats should be making a big, bold push on climate—and the CLEAN Future Act is simply not strong enough.” Jones continued:

“While this bill has been marginally improved, it fails to grasp the fundamental truth of fighting climate change: We must stop extracting and burning fossil fuels as soon as possible,” stressed Jones. “We should not waste time creating credit schemes and offsets markets, or prop up fossil fuels with carbon capture fantasies.”

“A bold climate plan must call for a ban on fracking and all new fossil fuel infrastructure,” he added, “and a swift and just transition to 100% clean, renewable energy across all sectors of the economy. The CLEAN Future Act may have been revised since last year, but it’s still a Green New Dud.”