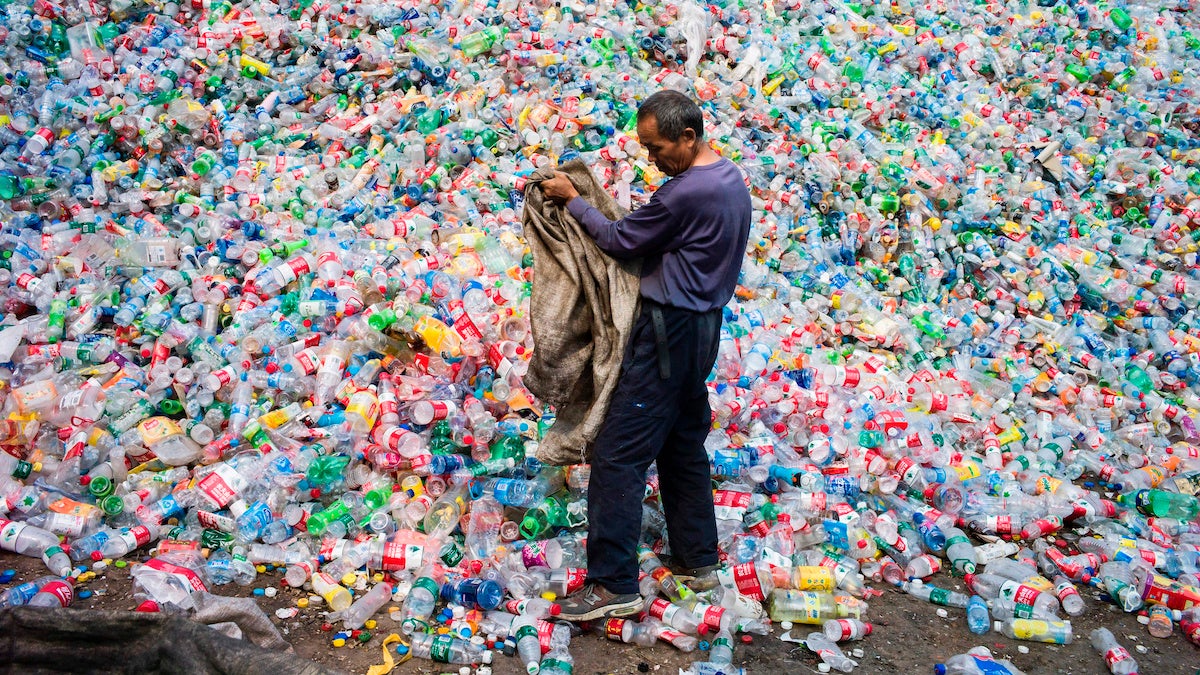 A worker sorts out plastic bottles for recycling in Dong Xiao Kou village. China also announced Sunday that it would work to promote the use of recycled plastics. FRED DUFOUR / AFP via Getty Images

China, the world’s No. 1 producer of plastic pollution, announced major plans Sunday to cut back on the sale and production of single-use plastics.

According to the plans put forward by the National Development and Reform Commission and the Ministry of Ecology and Environment, plastic bags will be banned in major cities by the end of 2020 and in smaller cities and towns by 2022, Reuters reported. (Markets selling fresh fruits and vegetables will have until 2025 to phase out the bags).

The commission said it was enacting the changes in order to protect public health and “to build a beautiful China,” CNN reported.

The plan targets a variety of plastic types and industries over the next five years, BBC News reported. Other measures include:

The plan also calls for the phaseout of plastic takeaway items and shipping packages, Reuters reported. The government also announced Sunday it would work to create recycling programs and promote the use of recycled plastics, according to CNN.

“It’s the first time Beijing has recognised single-use plastics as a major problem and specified the urgent necessity to significantly reduce them,” Greenpeace tweeted in response to the announcement.

It’s the first time Beijing has recognised single-use plastics as a major problem and specified the urgent necessity to significantly reduce them. #BreakFreeFromPlastic >>https://t.co/82qv26uzhdhttps://t.co/dz9f9mbw7q

China did ban retailers from giving away free plastic bags in 2008, and also banned the production of ultra-thin bags, BBC News reported.

China is the world’s largest manufacturer of plastic, according to CNN. It is also the world’s leading producer of plastic waste, according to the University of Oxford’s Our World in Data. It produced 60 million tonnes (approximately 66 million U.S. tons) in 2010, followed by the U.S., which produced 38 million tonnes (approximately 42 U.S. tons). However, on a per capita basis, the average Chinese person discards one-fourth to one-half of the plastic waste discarded by the average U.S. resident.

But because China has a much larger population, the tossing of plastic waste has become a major problem for its infrastructure and environment, overwhelming its landfills and polluting its rivers. China’s largest dump is around the size of 100 soccer fields and is already at capacity, 25 years before planned, BBC News reported. And the Yangtze River dumps more plastic into the oceans than any other river in the world, according to CNN.

Around eight million metric tons of plastic enter the world’s oceans every year, where they pose a major threat to marine life. China is the leading contributor to the kind of mismanaged plastic waste that is the most likely to end up in the oceans, generating around 28 percent of the world’s total, according to Our World in Facts. Asia as a whole is the region that produces the most mismanaged waste, but other countries in the area are also taking steps to combat the problem. Thailand banned plastic bags at major stores this year; Bali in Indonesia banned single-use plastics; and Jakarta, the country’s capital, will ban plastic bags by June 2020, BBC News reported.