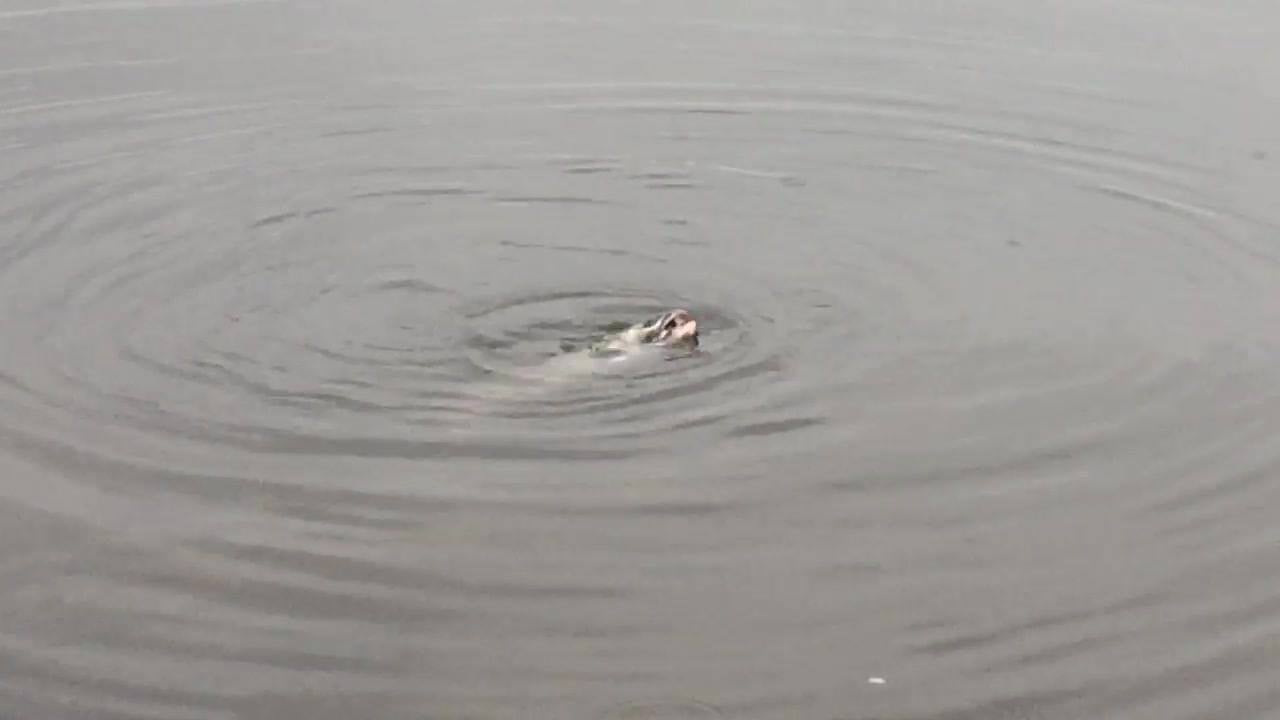 The grisly video above shows a coho salmon struggling to survive in
polluted stormwater runoff on the Duwamish River in Washington. This contaminated water—filled with oil from cars, pesticides, dirt and debris—can kill this particular species of Pacific salmon in hours, according to Puget Soundkeeper Alliance, which posted the clip on Oct. 21.

Sadly, it appears that this fish is one of many coho salmon in the Puget Sound Basin that have died, and will continue to die, from this man-made tragedy.

A new
study, published in the Ecological Society of America‘s journal Ecological Applications, has found “that contaminants in stormwater runoff from the regional transportation grid likely caused these mortality events.”

“Further, it will be difficult, if not impossible, to reverse historical coho declines without addressing the toxic pollution dimension of freshwater habitats,” the authors note.

Stormwater runoff comes from rain that falls on streets, parking areas and other developed land and flows directly into waterways. As it flows, the water can collect a potentially toxic cocktail of oil, grease, animal waste, litter, pesticides, fertilizers and other potential pollutants.

The new analysis was compiled by researchers at National Oceanic and Atmospheric Administration’s (NOAA) Northwest Fisheries Science Center in Seattle along with collaborators at the U.S. Fish and Wildlife Service, local tribes and the Wild Fish Conservancy.

For the study, researchers surveyed coho mortality rates at 51 spawning sites in Puget Sound and were able to positively link die-offs to increased road density and traffic intensity, among other variables.

Citing the study, the Herald Net wrote, “The results show that in an estimated 40 percent of their range in the Puget Sound Basin, 10 to 40 percent of coho salmon die before they can even spawn because of pollution.”

The team was able to generate a predictive mortality risk map for the entire Puget Sound Basin.

“It can be extremely useful for urban planning to know that if you develop this area and in an old-school way you are going to take out a lot of coho,” Blake Feist, lead author on the paper, told
The Seattle Times.

“We have to act now,” said Jay Davis, an environmental toxicologist for the U.S. Fish and Wildlife Service who coordinated field research for the study. Davis told the Washington Post that the coho population could crash in as little as six years.

Incidentally, coho is the only one out of the five salmon species—chinook, sockeye, pink and chum—that is experiencing this rate of mortality, a “great mystery that we are working on,” Nat Scholz, NOAA research zoologist, told the Washington Post.

The solution could lie in “green infrastructure and similar clean water strategies could prove most useful for promoting species conservation and recovery,” the authors note.

Puget Soundkeeper Alliance also
suggested that “smarter development of land and on-site filtering of stormwater, which helps control both pollution and flooding.”

Elsewhere, the Central California Coast coho salmon—once plentiful in local rivers and streams—is now “living on the edge” as it faces challenges such as multiyear droughts and the increased presence of fine sediment, rocks and fallen trees from damming and logging activities, according to the Santa Cruz Sentinel.

And as Mongabay reports, northwest salmon fisheries have been struggling due to warming oceans and overdeveloped, dammed and silted spawning rivers and streams. While federally funded local, state and tribal programs administered by NOAA have helped declining salmon fisheries, President Trump’s 2018 budget would cut all those programs. For now, Congress has restored them.

You can learn more about the threat of toxic runoff and how you can help here.