Can the Everglades Be Restored? 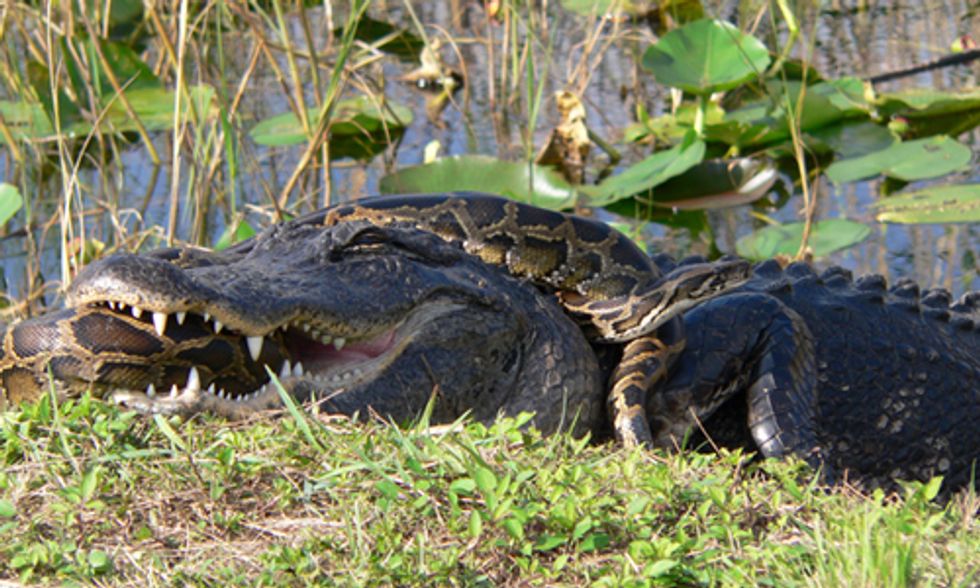 Sunny Zhang is a sophomore at Duke University studying Environmental Science and Public Policy. She enjoys roadtrips, reading about nature, and upcycling.

I grew up in the Everglades, riding airboats, canoeing through mangrove waterways, catching shade from gumbo-limbo trees and going alligator sighting—I’ve always loved the Everglades. It is a beautiful set of interconnected ecosystems in south Florida, composed of vast areas of marshland, cypress tree swamps and mangrove estuaries. The Everglades is a refuge to the critically endangered Florida panther and has plains of sawgrass as far as the eye can see, not to mention it’s the only place in the world where you can find both alligators and crocodiles.

Scientists estimate that there are now tens of thousands of Burmese Pythons in the Everglades. Photo Credit: Lori Oberhofer / National Park Service

So when I first learned about novel ecosystems, I immediately denied the fact that the Everglades classified as one.

A novel ecosystem is defined as an ecosystem that differs in composition, structure or function from present and past systems as the result of human altercation. These ecosystems are hybrids of original, historic ecosystems and often contain invasive species that dominate the area at the expense of native species.

Ultimately, the Everglades qualifies as a novel ecosystem. About 50 percent of the original Everglades remains. With more than 25 percent of its fauna being non-native species, and housing the highest number of exotic plant species in the world, the Everglades is probably the best example (and worst case) of a novel ecosystem. The 1,392 exotic plant species actually outnumber the 1,301 plant species considered native to South Florida. Human effects on water flow have caused the alligator population within the Everglades to drop drastically. Dig a little deeper and you’ll discover that even the waterways have been artificially manipulated. It’s nearly impossible to restore the Everglades as it was before, the "River of Grass" undisturbed by human exploitation, pollution, agricultural development, and suburban expansion. It is strange to know that a considerable amount of what you see out in the Everglades doesn’t actually belong there.

Calling the Everglades a novel ecosystem will help develop a better management framework to address the rapid changes occurring within it.
Photo credit: Shutterstock

We spend $500 million every year simply trying to control invasive species. Should we care to maintain the Everglades if it is "novel?"

Economic factors aside, the Everglades has intrinsic values—aesthetic and cultural. We don’t just preserve the Everglades because it improves water quality or prevents flooding. We preserve it because we value the biodiversity it brings us, and the unique regional commonality it provides. The Everglades is integrated into the Florida school curriculums, displayed at photo galleries, and is a vital part in sustaining the local tourism economy. The slow moving pace of the ‘River of Grass’ also shows us that there is more to life than the hustle and bustle you find in Miami and other cities. Being in the Everglades is humbling. It reminds urban and suburban South Floridians that all of the resources and land we use comes from somewhere. It shows us that different ecosystems are interconnected. The Everglades reminds us of nature’s wonders.

Though there are species that do not belong in the Everglades, they should not tarnish the value of the ones that do. Labeling the Everglades as a novel ecosystem should not change our mindsets and sentiments toward protection and restoration.

Even though they might not seem "natural," studying novel ecosystems can tell us more about the progression of nature. Calling the Everglades a novel ecosystem will help develop a better management framework to address the rapid changes occurring within it. It conveys the clearer realities we must face—the alterations we’ve made to the Everglades are almost irreversible.

6 Ways to Deepen Your Spiritual Relationship to Nature