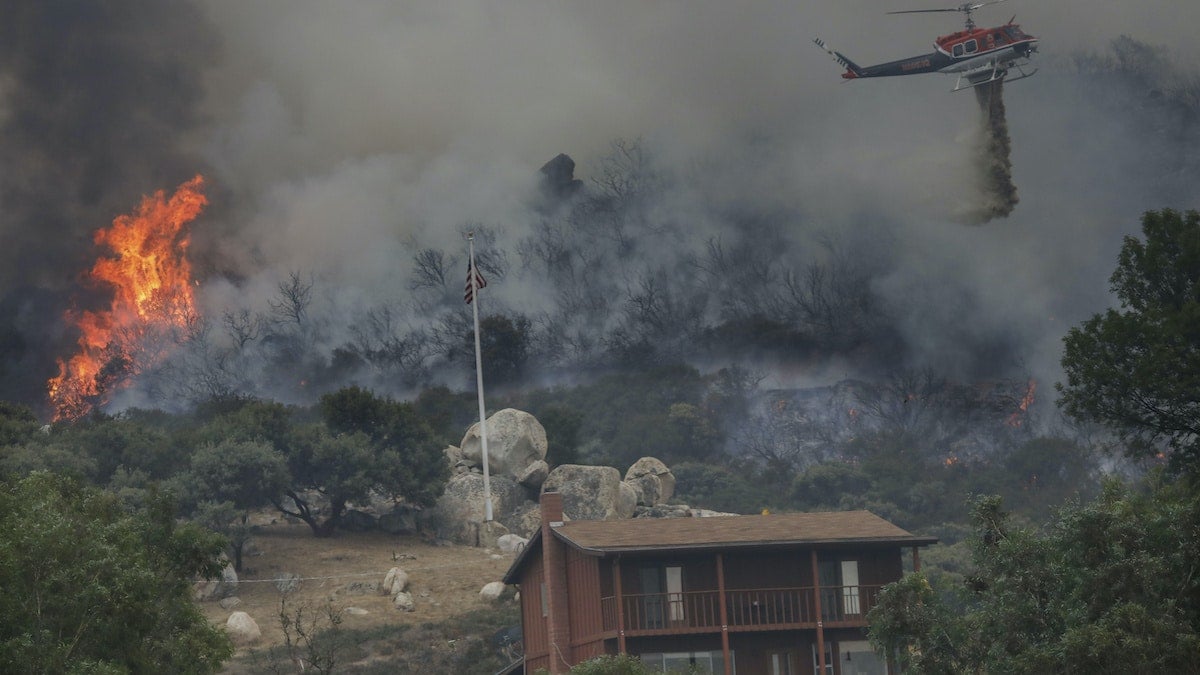 A brush fire encroaches along Japatul Road as a helicopter drops water during the Valley Fire in Jamul, California on Sept. 6, 2020. SANDY HUFFAKER / AFP via Getty Images

On a Labor Day weekend when the temperature hit 121 degrees in Los Angeles County, fire crews around California struggled to contain ongoing and growing blazes that have so far consumed more than 2 million acres this summer. That’s equal to the entire state of Delaware going up in flames, according to the BBC.

The record heat coupled with dry and windy conditions is making the 22 fires in the state difficult for crews to contain. In a preventive measure, the state’s power authority shut off electricity to 172,000 homes and businesses in 22 counties in Northern California. The power will not be fully restored until Wednesday evening, according to CNN.

The small mountain town of Big Creek in the Sierra Nevada mountain range saw trapped campers airlifted to safety while the fire burned through the town, destroying roughly two dozen homes, according to NBC News.

While a hydroelectric plant owned by Southern California Edison was destroyed, three propane tanks with 11,000 gallons of the flammable gas exploded and an elementary school caught fire.

The school’s superintendent, Toby Wait, evacuated with his family, but his home was destroyed after they fled.

“Words cannot even begin to describe the devastation of this community,” he said to The Fresno Bee, as NBC News reported.

The fire started on Friday and grew to burn nearly 80,000 acres Monday, according to the California Department of Forestry and Fire Protection. It is zero percent contained.

“This one’s in a class by itself,” said U.S. Forest Service Supervisor Dean Gould during a Monday night press briefing, as CNN reported.

Farther south, Los Angeles and Ventura county are under a red flag warning as the cooling temperatures after the weekend’s record heat are expected to usher in high winds, which may fan the flames of ongoing fires.

The state’s fire authorities are currently battling 24 fires across the state, according to the BBC.

While the red flag warning in Los Angeles and Ventura counties is expected to last through Wednesday, the state will also see wind gusts of up to 50 mph in Northern California. Those high winds are particularly dangerous as they pose the threat of spreading flames over the dry vegetation that is parched after the weekend’s heat, according to PG&E senior meteorologist Scott Strenfel, as CNN reported.

“Unfortunately, this wind event is occurring on the heels of the current heat wave and will produce critical fire potential conditions,” Strenfel said, as CNN reported.

All campgrounds across the state have been canceled in a season that has seen a record number of campers. The U.S. Forest Service said the following in a press release: “Most of California remains under the threat of unprecedented and dangerous fire conditions with a combination of extreme heat, significant wind events, dry conditions, and firefighting resources that are stretched to the limit.”

According to the BBC, the Valley Fire in San Diego County has burned more than 10,000 acres near the small town of Alpine. In Angeles National Forest, the Bobcat fire has burned through nearly 5,000 acres and prompted the evacuation of the Mount Wilson Observatory.