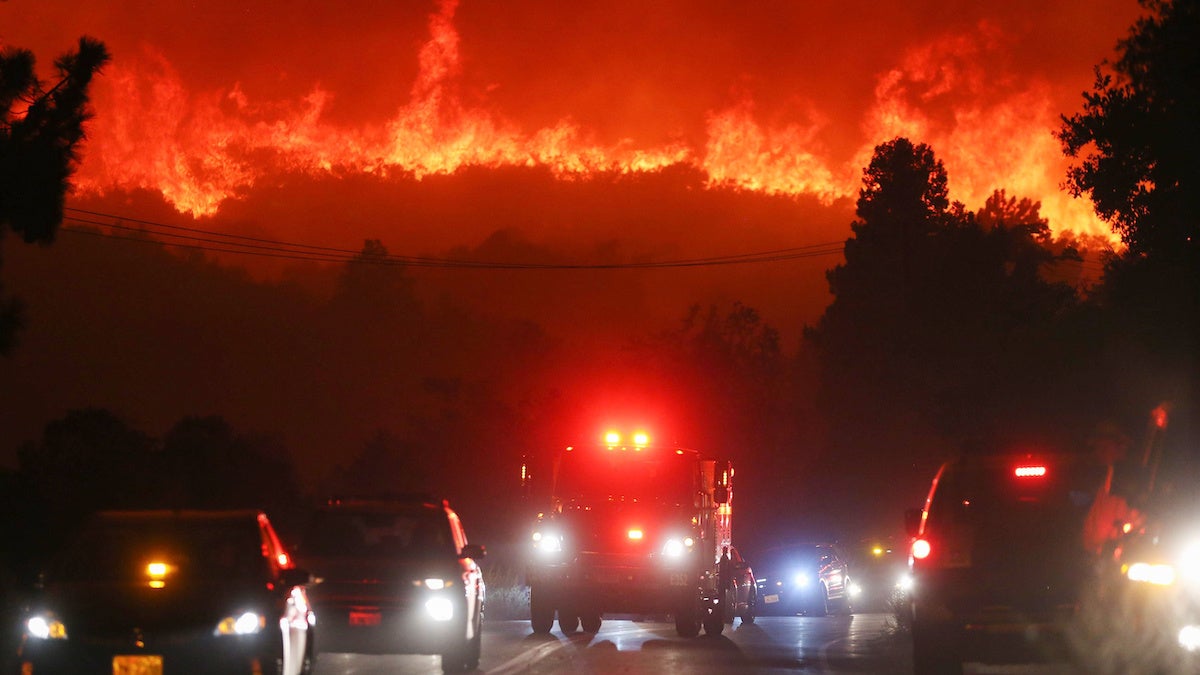 Flames from the Lake Fire burn on a hillside near a fire truck and other vehicles on Aug. 12, 2020 in Lake Hughes, California. Mario Tama / Getty Images

An “explosive” wildfire ignited in Los Angeles county Wednesday, growing to 10,000 acres in a little less than three hours.

The so-called Lake Fire, which prompted evacuations and road closures, is remarkable for spreading so fast so early in the fire season without strong winds to drive it.

“It’s pretty explosive fire behavior,” Angeles National Forest Fire Chief Robert Garcia told CBS Los Angeles. “It’s typically what we see a little bit later in the season and often driven by wind. The fuel, moisture conditions and the fire at this particular location with the slope, it really created the recipe for rapid fire growth.”

|Update| The #LakeFire has grown to 10,000 acres and is 0% contained. pic.twitter.com/gNuygunYX4

The fire ignited around 3:40 p.m. Wednesday and is still zero percent contained, according to the most recent information from the U.S. Forest Service’s InciWeb. It is burning about 65 miles northeast of Los Angeles in the Angeles National Forest, between Lake Hughes and Lake Castaic, USA TODAY reported.

Evacuations were ordered for the entire Lake Hughes area Wednesday night. All told, residents of around 100 homes and buildings were told to flee.

Evacuees were directed to the Highland High School, but, because of the coronavirus pandemic, will have to remain in their cars, CBS LA reported.

In addition to its early start and rapid spread, the fire is notable because it is burning vegetation that hasn’t been set ablaze since 1968.

“Portions of the forest [haven’t] had a significant amount of fire in a very long time, 1968, for a large portion of that area, it hasn’t burned since then,” Garcia told ABC 7.

I have never seen anything like this. The #LakeFire is moving fast toward Lake Hughes. It created a fire tornado on this hill and it’s sucking everything inside. @ABC7 pic.twitter.com/PwzepwKHKp

There have been no reports of injuries and no official tally of structural damage, according to ABC 7. However, the fire was seen burning several homes.

Reporter Veronica Miracle tweeted that she had spoken to a man who had fled his home as a wall of flames approached.

“He thinks his house is gone,” she said.

Just spoke to a man who lives up the street from this road block. He says when he left his home there was a wall of flames coming toward it. He thinks his house is gone.

Media is now being evacuated from here because fire is approaching. Moving closer to Lake Hughes. pic.twitter.com/xE48GgxrBw

Television footage early Thursday showed buildings burned to the ground, The Associated Press reported, but it was not clear if they were homes or not. Los Angeles County Deputy Fire Chief David Richardson said Wednesday night the flames might have burned some outbuildings.

More than 500 firefighters are combating the blaze, according to InciWeb. The area is expected to record temperatures in the 90s this afternoon.

Smoke from the fire could be seen from as far as Venice Beach Wednesday.

The climate crisis is making California‘s wildfires larger and more extreme as high temperatures dry out vegetation, making it more likely to burn.