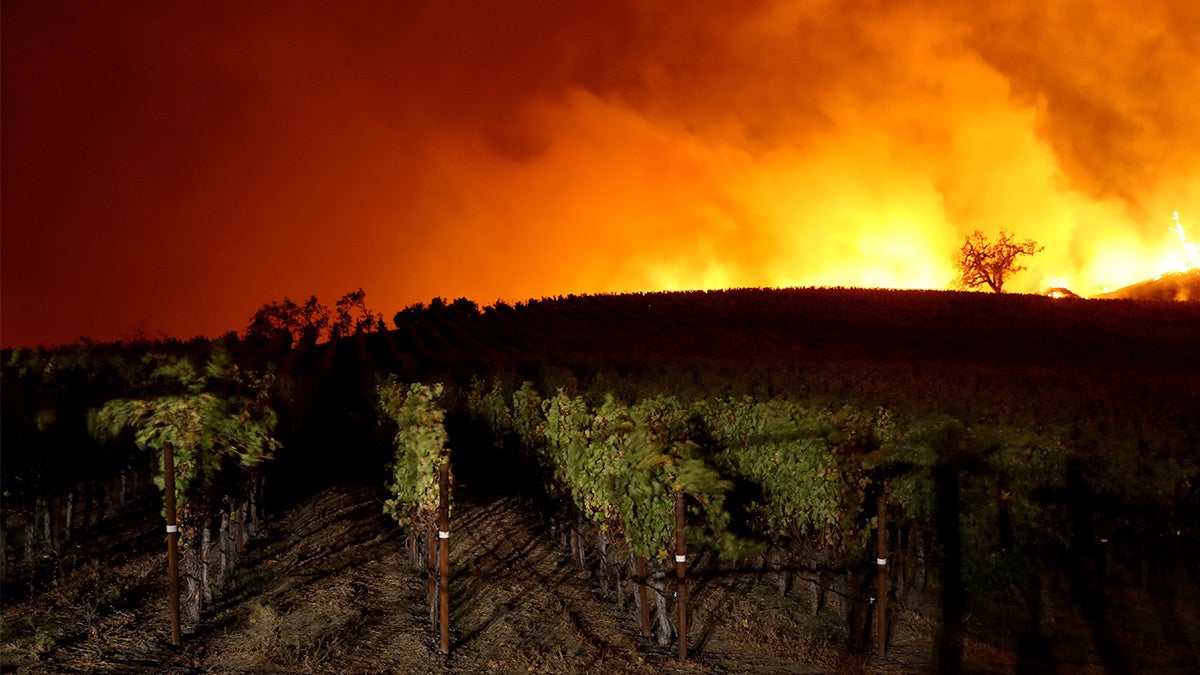 A fast-spreading wildfire erupted in California‘s Sonoma County Wednesday night, the San Francisco Chronicle reported. It had grown to 7,000 acres as of 2:12 a.m. Thursday, according to the Sonoma Lake Napa Unit of the California Department of Forestry and Fire Protection (CAL FIRE).

“The fire is moving at a dangerous rate,” Geyserville Fire Protection District Capt. Joe Stewart said in a Facebook video reported by the Los Angeles Times. “If you are woken by emergency alerts, please heed those warnings and evacuate.”

The so-called Kincade Fire ignited at around 9:30 p.m. near Burned Mountain and Kincade roads, The Mercury News reported. By 12:45 a.m. Thursday, it had spread to 400 acres. As of 2:12 a.m., it was still zero percent contained, according to CAL FIRE.

Vineyard manager David Huebel, 40, saw the flames at around 9:35 p.m. when looking towards the Mayacamas Mountains.

“I was asking myself, ‘Is that fire?'” Huebel told the San Francisco Chronicle. “Everything about the scene was wrong. There shouldn’t have been light right there, it shouldn’t have been orange. It was a couple minutes later I saw a column of smoke. We watched it grow for more than two hours before we left.”

The fire broke out a little more than six hours after utility Pacific Gas and Electric (PG&E) shut off power to around 27,830 customers in Sonoma County as part of an attempt to prevent its power lines from starting fires, the San Francisco Chronicle reported.

The Kincade Fire is burning “near the (shut-off) footprint and we are working to gather additional information,” PG&E spokeswoman Karly Hernandez told the San Francisco Chronicle.

All told, the utility shut off power to 178,000 customers in 15 counties Wednesday after the National Weather Service (NWS) issued a red-flag warning for the windy, dry conditions that increase fire risk. This is the second time this month that PG&E has preemptively shut off power because of red-flag conditions.

Those conditions were also expected to make the fire harder to fight. The NWS recorded a gust of 76 miles per hour near the blaze, The Press Democrat reported, and fire crews could not attack the fire from the air because of turbulence.

“This fire is burning fast,” California State Sen. Mike McGuire said. “It’s dangerous, and winds are not our friends at this moment.”

The fire was visible from Santa Rosa, where several destructive fires caused havoc two years ago, the San Francisco Chronicle pointed out. The October 2017 fires killed dozens and destroyed thousands of homes, according to the Los Angeles Times.

While several factors contribute to wildfires, including forest management and increased development, the climate crisis is making the fire season longer in the Western U.S. and making the fires themselves larger.