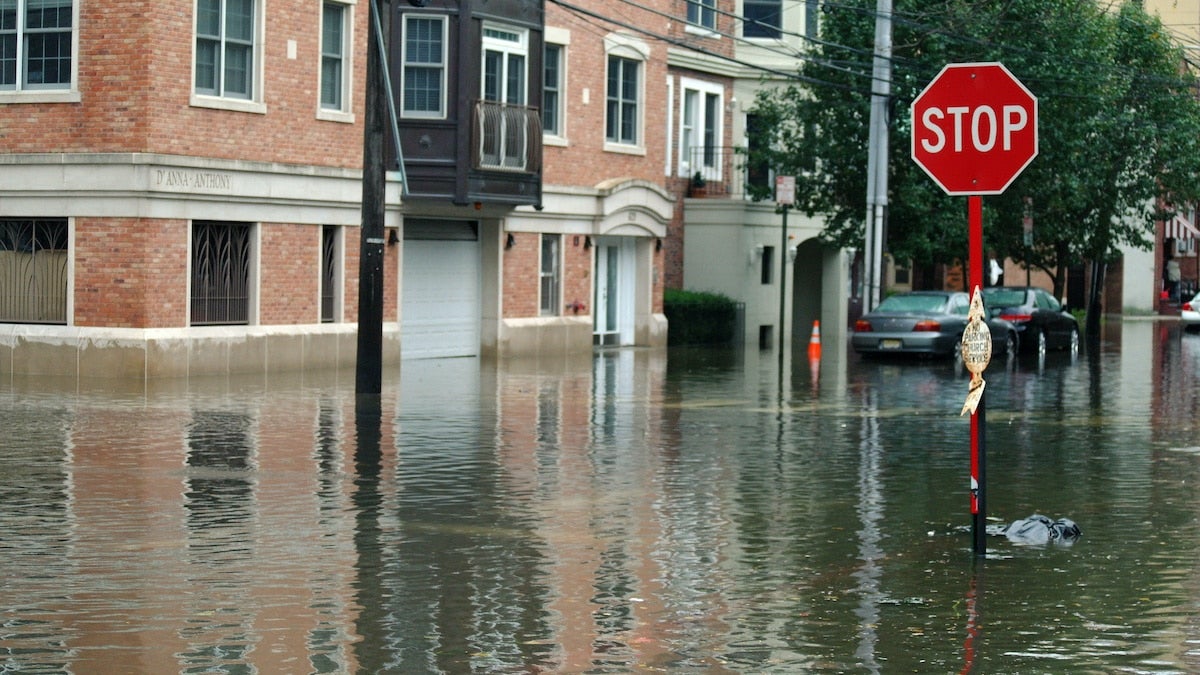 The corner of Jefferson and 7th in Hoboken, N.J., is flooded on Oct. 30, 2012 following Superstorm Sandy. Alec Perkins / Wikimedia Commons / CC by 2.0

The city of Hoboken on Wednesday filed a lawsuit against multiple Big Oil players—including ExxonMobil, incorporated in New Jersey—joining an increasing number of state and local governments using litigation in efforts to hold the fossil fuel industry accountable for defrauding the public about foreseen climate crisis damages and to make companies “pay their fair share” of the costs of mitigating greenhouse gas emissions and adapting to a warming planet.

The lawsuit argues that the defendants—ExxonMobil, Shell, Chevron, BP, ConocoPhillips, and the American Petroleum Institute—knew that “their production, marketing, and sale of fossil fuels would cause global climate change,” but they engaged in a massive “disinformation campaign” to protect their profits, which would diminish in conjunction with decreased fossil fuel use.

Big Oil began redesigning its own assets to adapt to rising sea levels at the same time it was “telling the world that climate change was a hoax,” the lawsuit states.

According to the Center for Climate Integrity (CCI), Hoboken is the 20th community to take fossil fuel giants to court to “recover billions of dollars in damages caused by the oil and gas industry’s deception about climate change.”

Richard Wiles, executive director of CCI, said in a statement that “with climate costs surging everywhere and local budgets depleted, more and more communities are turning to the courts as their only recourse to make polluters pay for their fair share of the wreckage they knew their products would cause.”

Exxon and their co-conspirators can’t run from this growing wave of climate lawsuits. Thanks to Hoboken, for the first time, Exxon will have to defend its shameful record of climate damages, disinformation, and denial on its home turf. It takes guts to sue the most ruthless, deceitful, and unapologetic climate polluters on the planet. Hoboken’s elected leaders should be applauded.

According to local reporters, Hoboken Mayor Ravi Bhalla’s announcement of the legal action came one month after “the low-lying city suffered two flooding events that theoretically should have occurred once in 50 years.”

In addition, residents remember the devastating impact that Superstorm Sandy had in 2012, when a 14-foot storm surge overwhelmed outdated sewer systems to cause over 0 million in damage in the city.

At Wednesday morning’s press conference, Bhalla described his intentions to get Hoboken off the list of coastal communities at risk of becoming inundated within the next five decades.

At the same time we’ve invested hundreds of millions of dollars adapting to the realities of climate change, Big Oil companies have engaged in a decades long campaign of misinformation that has contributed to global warming which has disproportionately impacted our residents. We cannot stand idly by and allow Big Oil to continue profiting at the expense of Hoboken residents. It’s time these companies pay their fair share and be held accountable for their actions.

Over the past decade and in response to rising sea levels, Hoboken has invested 0 million in climate change adaptation, including several projects that are part of its Rebuild by Design comprehensive water management strategy, according to a statement from the city.

Hoboken’s lawsuit aims to “recover funds to pay for the costs that the city is undertaking, and will undertake as a result of the substantial impacts of climate change, which has been exacerbated by Big Oil.”