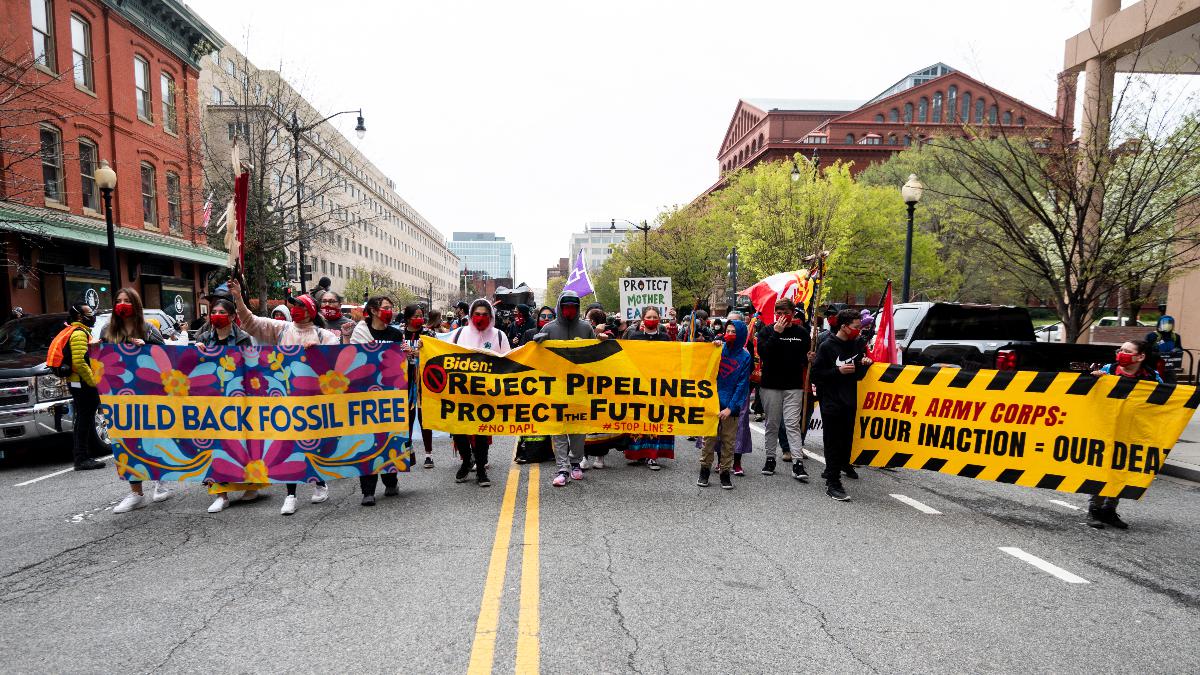 Indigenous leaders and climate campaigners on Friday blasted President Joe Biden’s refusal to shut down the Dakota Access Pipeline during a court-ordered environmental review, which critics framed as a betrayal of his campaign promises to improve tribal relations and transition the country to clean energy.

“Biden’s inaction to protect our fragile ecosystems, natural resources, traditional medicines, and Indigenous rights is a clear sign that this administration is the exact opposite of the climate leadership narrative they promised to lead during his campaign,” said Tasina Sapa Win Smith of the Cheyenne River Grassroots Collective.

Brooke Harper, campaign strategist for the environmental group 350.org, declared that “the Biden administration missed a huge opportunity today to take a step towards ensuring a livable future for everyone in this country.”

“The Dakota Access Pipeline violates treaty rights and endangers land, water, and communities,” Harper said. “The climate crisis is here; we can no longer afford to build polluting, dangerous fossil fuel pipelines and delay a just transition to 100% clean energy. In solidarity with Indigenous water protectors, we call on President Joe Biden to stop the Dakota Access pipeline, Line 3, and all new fossil fuel projects immediately. If Biden wants to be a climate leader on the world stage, he needs to start at home.”

U.S. District Judge James Boasberg, who ordered the environmental impact assessment last year, held a hearing Friday afternoon so the U.S. Army Corps of Engineers could provide an update on whether the Biden administration planned to allow the pipeline known as DAPL to continue operating without a federal permit.

After Ben Schifman, an attorney for the government, shared that the Army Corps of Engineers would not shut down the pipeline at this time but “is essentially in a continuous process of evaluating,” Boasberg granted the 10-day continuance. The DC-based judge is expected to decide whether he will order DAPL to shut down by April 19.

The pipeline carries oil from North Dakota, through South Dakota and Iowa, to Illinois. Although the project was denied permission to cross beneath Lake Oahe on unceded ancestral tribal lands by former President Barack Obama — under whom Biden was vice president — former President Donald Trump swiftly reversed course and allowed the project to proceed.

Indigenous water protectors and environmentalists have been fighting against the pipeline for years — opposition that’s been met with forceful crackdowns by private security and law enforcement. Since it began operating in 2017, DAPL and the communities through which it runs have been plagued by repeated leaks.

The climate crisis is the greatest threat we face as a nation and a planet.

Today I led a letter with @RepRashidaTlaib urging President Biden to conduct a thorough review of existing and proposed oil pipeline projects, including Line 3, Dakota Access Pipeline , and Line 5. pic.twitter.com/NcxOahpSGX

Dozens of Democrats have recently joined with tribal leaders and climate activists in calling on Biden to order a shutdown. Opponents of the pipeline have also raised the issue of sovereignty.

“For hundreds of years, our people have faced unwelcome and deadly incursions upon our homelands,” said Phyllis Young, Standing Rock organizer for the Lakota People’s Law Project and former tribal liaison to the Oceti Sakowin protest camp. “Today’s decision is disappointing and demonstrates a lack of understanding by Washington politicians for Indigenous sovereignty.”

“We will do our very best to see this pipeline removed, our water protected, and our sacred lands healed,” Young said. “We will replace fossil fuels with renewable energy. One bad decision can’t change that. We’re dedicated to providing a better future for the generations to come. We’ve been fighting for our lives for centuries, and we aren’t going to stop now.”

Chairman Mike Faith of the Standing Rock Sioux Tribe said Friday that “we are gravely concerned about the continued operation of this pipeline, which poses an unacceptable risk to our sovereign nation.”

“In a meeting with members of Biden’s staff earlier this year, we were told that this new administration wanted to ‘get this right,'” Faith noted. “Unfortunately, today’s update from the U.S. Army Corps of Engineers shows it has chosen to ignore our pleas and stick to the wrong path.”

Joye Braun, an Indigenous Environmental Network (IEN) DAPL frontline organizer and citizen of the Cheyenne River Sioux Nation, said that “it is imperative that the Biden administration shut down DAPL now.”

“The Army Corps of Engineers should not twist the rule of law to favor big oil interests and further spit on the nation-to-nation relationship between tribal nations and the U.S. government,” Braun continued. “The Biden administration needs to do the right thing and stop this illegal pipeline.”

“Why allow something illegal to continue?” Braun asked. “Set the example, honor the treaties, and show that the rule of law is greater than oil corporate interests. We will no longer accept being the sacrificial lamb for corporate raping of our Mother Earth and her water.”

According to CNN, Earthjustice attorney Jan Hasselman, who has represented Standing Rock in its legal challenge against DAPL for several years, called the administration’s inaction on Friday “a continuation of a terrible history.”

“This pipeline is unsafe and operating in violation of federal law. Meanwhile, Energy Transfer is seeking to double capacity, which would make DAPL twice as dangerous,” Hasselman added in a statement, referring to one of the pipeline’s owners. “Yet the Biden administration’s decision here is to do nothing.”

“It’s hard to see how we’ll ever transition away from fossil fuels or show the rest of the world that we’re serious about tackling climate change, if we are just going to shrug and look away when the fossil fuel industry brazenly ignores tribal concerns and tramples our federal environmental laws and safety regulations,” the attorney said.

We are not backing down, @JoeBiden. We will #ShutdownDAPL.

Respect us, or expect us.

Biden — who moved to rejoin the Paris agreement and block the Keystone XL Pipeline on his first day as president — has invited world leaders to join him later this month for a virtual climate summit.

“The Leaders Summit on Climate will underscore the urgency — and the economic benefits — of stronger climate action,” said a White House statement about the event. “It will be a key milestone on the road to the United Nations Climate Change Conference (COP26) this November in Glasgow.”

In a statement Friday, Sierra Club executive director Michael Brune noted that “Biden campaigned and was elected on the boldest climate platform ever. Minutes after being sworn in, Biden began taking real, meaningful climate action. Less than a week into office, the president issued a memorandum on strengthening tribal consultation.”

“Yet, President Biden’s actions today fail to live up to the climate and tribal commitments he made,” Brune said, adding that the decision to not shut down DAPL doesn’t align “with the bold action he has taken since taking office.”

“The Dakota Access Pipeline is a dirty, dangerous, illegally constructed pipeline that has continued to threaten tribal sovereignty and our collective right to clean water and a healthy, sustainable climate,” he said. “Continued and expanded reliance on crude oil is not compatible with the president’s own climate commitments, including the ones we expect him to make in weeks’ time at his climate summit.”

“The climate crisis demands that President Biden and his administration seize every opportunity to confront it,” he concluded. “Today’s decision is deeply disappointing, and we expect the courts to rightfully put an end to the Dakota Access Pipeline, just as we expect the president’s future actions to meet his rhetoric and commitments.”