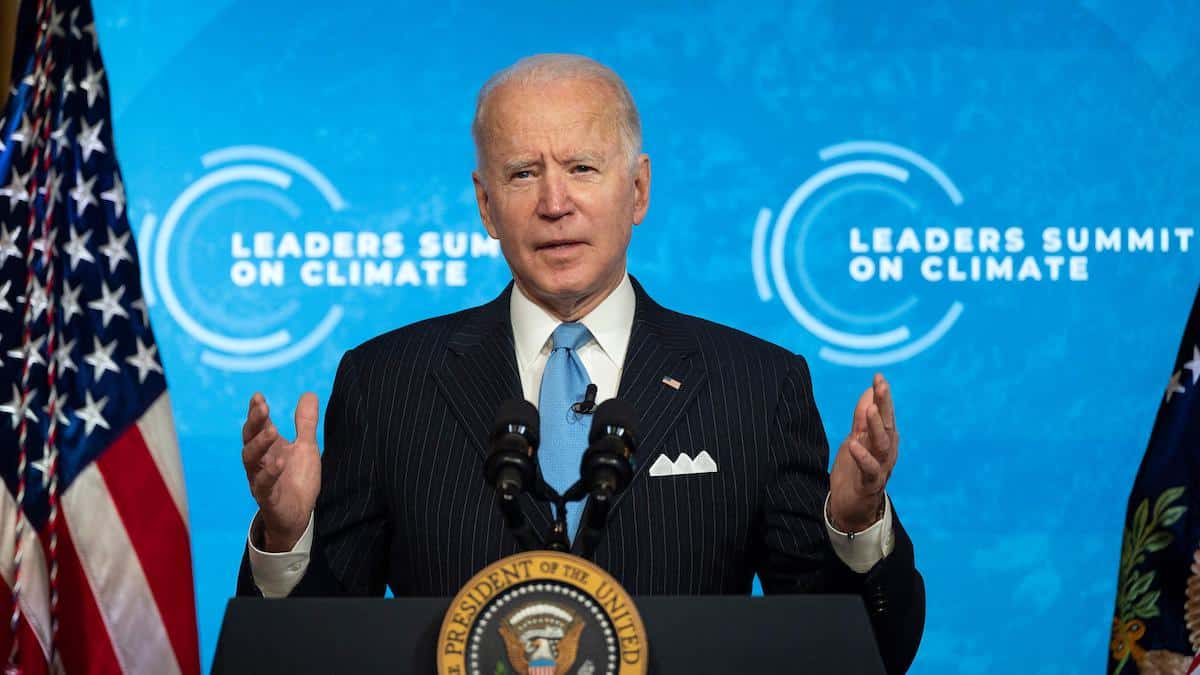 Climate justice campaigners plan to descend on Washington, DC in October to protest outside the White House for a week straight, calling on President Joe Biden to declare a climate emergency and end all new fossil fuel projects.

The Build Back Fossil Free coalition announced the People Vs. Fossil Fuels: Biden’s Test demonstrations, to be held October 11-15, in a statement Thursday. The week of action will come just before COP 26, a United Nations climate summit scheduled to begin in Scotland at the end of next month.

The coalition’s main message is: “President Biden, you cannot claim to be a climate leader when you are still supporting fossil fuels. Stand with frontline communities, stand with future generations, stop approving fossil fuel projects, declare a climate emergency now.”

Activists plan to gather in McPherson Square at 8:00 am ET each day, focusing on different themes throughout the week:

“The fossil fuel industry has brought devastation to our homelands and it’s time that we bring this fight to Biden’s doorstep,” said Braun. “Despite President Biden’s climate rhetoric, his administration has failed to stop major projects like the Line 3 tar sands pipeline, defended oil drilling in the Arctic, promoted fossil fuel exports, and allowed drilling, mining, and fracking to continue on Native and public lands.”

“We showed up to vote,” the organizer added, referencing last year’s presidential election, “and we will continue to show up to make him uncomfortable in his inaction until the drastic needed steps are taken to mitigate climate change and protect Mother Earth.”

Sharon Lavigne, executive director of RISE St. James, one of the groups fighting a proposed Formosa Plastics complex in an area of Louisiana called “Cancer Alley,” said that “I’m looking forward to going to DC to speak to President Biden to ask him to refuse all fossil fuel projects.”

“If Formosa Plastics is built, it would be a death sentence for the people over here,” warned Lavigne, who was honored earlier this year with the Goldman Environmental Prize. “We want to live and we want to breathe clean air.”

Siqniq Maupin, director of Sovereign Inupiat for a Living Arctic, who is fighting oil drilling in Alaska, declared that “we’re going to make it clear that we’re here to protect our land and waters.”

John Beard, director of the Port Arthur Community Action Network, which taking on Gulf Coast fossil fuel refineries and export facilities, said that those who gather in DC will encourage the president to “usher in a just transition to a clean, green renewables economy.”

The coalition’s announcement comes a day after the Canadian fossil fuel company Enbridge revealed that its new Line 3 — a larger replacement for an aging pipeline — is “substantially completed and set to be fully operational” this week, despite ongoing Indigenous-led opposition.

Since taking office in January, Biden has resisted calls from Native American and climate leaders to use his power to stop Line 3. The president has also made various promises to cut planet-heating pollution, from a broad plan to halve all U.S. emissions by 2030 to a methane-focused pledge with European leaders unveiled earlier this month.

The coalition’s plans also come as two pieces of legislation intended to deliver on many of Biden’s climate pledges — a limited bipartisan infrastructure bill and a broader Build Back Better package — face an uncertain future due to obstruction by right-wing Democrats.

“President Biden came into office promising bold action to transform our economy with renewable energy and good jobs, but he passed the buck to a dysfunctional Congress,” said Jean Su of the Center for Biological Diversity. “Biden has immense executive powers to speed the end of the fossil fuel era and ignite a just, renewable-energy revolution.”

Su, director of the center’s energy justice program, warned that “without executive action on fossil fuels, there’s no way for the president to protect us from the climate emergency. We’re calling on Biden to reclaim his power from coal- and gas-state senators and show us he can be our Climate President.”

Though Biden, while touring the damage of a deadly storm this month, called the climate emergency a “code red” situation, experts and activists have accused him of not matching that rhetoric with necessary action.

As John Paul Mejia of the youth-led Sunrise Movement put it Thursday: “We are so glad to be joining to descend upon DC and make our voices heard, because we cannot negotiate anymore. This is a matter of life or death.”