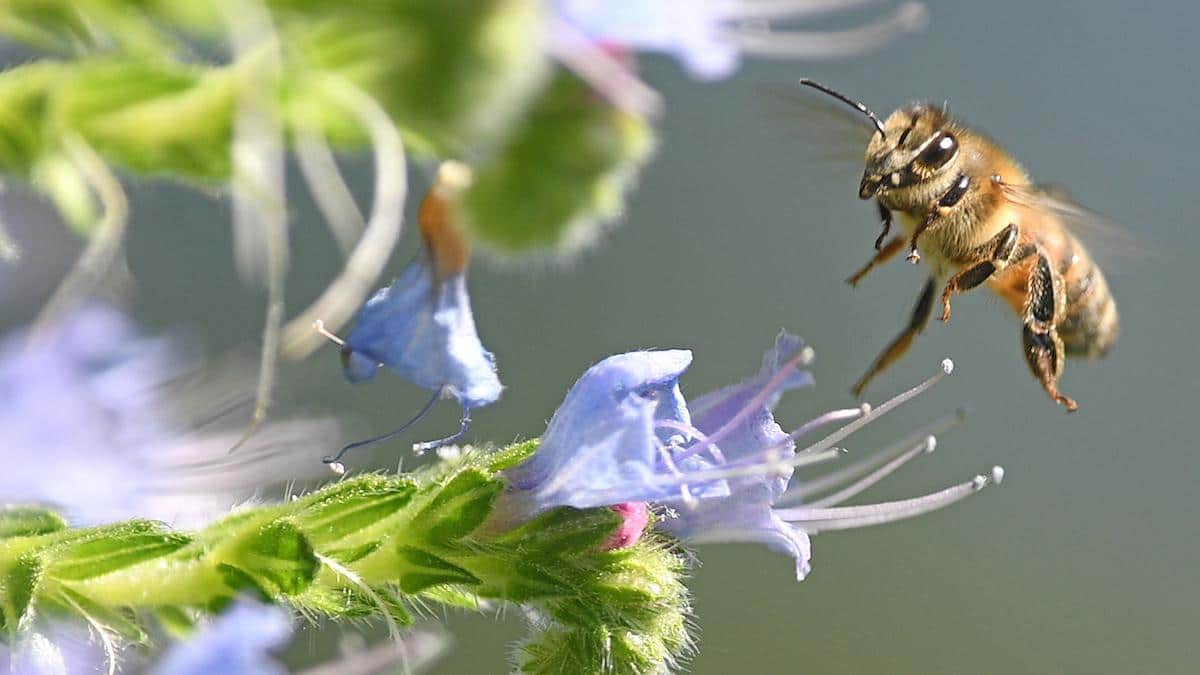 A bee hovers near flowers in St. James's Park in central London on May 21, 2020. DANIEL LEAL-OLIVAS / AFP via Getty Images

The UK government is facing backlash after it approved the emergency use of a pesticide thought to kill bees.

In 2018, the EU widened a ban on neonicotinoid pesticides because of their impact on bees and other pollinators. At the time, the UK government pledged to keep the ban in place after leaving the EU, The Guardian pointed out. But on Friday, the Department for Environment, Food and Rural Affairs (DEFRA) approved the neonicotinoid thiamethoxam for emergency use on sugar beets in 2021.

“We are very upset,” Buglife CEO Matt Shardlow said in a statement, “this is an environmentally regressive decision by Defra.”

The decision was made in response to requests from the National Farmers’ Union (NFU) and British Sugar to give sugar beets extra protection from a virus causing an ailment called virus yellows disease, The Guardian explained.

“Virus yellows disease is having an unprecedented impact on Britain’s sugar beet crop, with some growers experiencing yield losses of up to 80%, and this authorisation is desperately needed to fight this disease. It will be crucial in ensuring that Britain’s sugar beet growers continue to have viable farm businesses,” NFU chairman Michael Sly told The Guardian.

Other countries still currently in the EU have also allowed emergency use of the product, including Belgium, Denmark and Spain.

But environmental advocates argue that any use of the pesticide is too risky at a time when insect populations are in peril. A 2020 study found that land-based insects had declined 50 percent in the last 75 years. The UK alone lost a third of its bees in the last decade, according to The Independent. The decline of UK bees since 2007 coincided with the introduction of thiamethoxam, according to The Guardian. Studies have shown that the pesticide can weaken bees’ immune systems and harm the brains of young bees, making it harder for them to fly.

“Insects perform vital roles such as pollination of crops and wildflowers, and nutrient recycling, but so many have suffered drastic declines. Evidence suggests we’ve lost at least 50% of insects since 1970, and 41% of all insect species are now ‘threatened with extinction'”, the Wildlife Trust said in a Twitter thread responding to the news.

Bad news for bees: The Government has bowed to pressure from the National Farmers Union to agree the use of a highly damaging pesticide – neonicotinoid thiamethoxam – for the treatment of sugar beet seed in response to beet yellows virus @DefraGovUK (1/7) https://t.co/BpbkWBilLd

Other outraged citizens launched a petition calling on the government to reverse its decision.

“This pesticide is lethal to bees and other pollinators which our environment desperately needs to pollinate flora and fauna. Bees pollinate up to 3/4 of crops which makes the use of this pesticide incredibly counter-intuitive,” the petition stated.

2017: ‘The principal public good we will invest in is environmental enhancement.” Gove

I am so sick of the endless, endless lies.

In its statement, Buglife said it was especially concerned about a provision allowing farmers to destroy wildflowers around the beets and a lack of information about plans to keep the pesticide from polluting rivers. It noted that a similar application for emergency use was denied in 2018 due to its potential impacts on bees.

“Nothing has changed scientifically since the decision to ban neonics from use on sugar beet in 2018, they are still going to harm the environment,” Shardlow said.