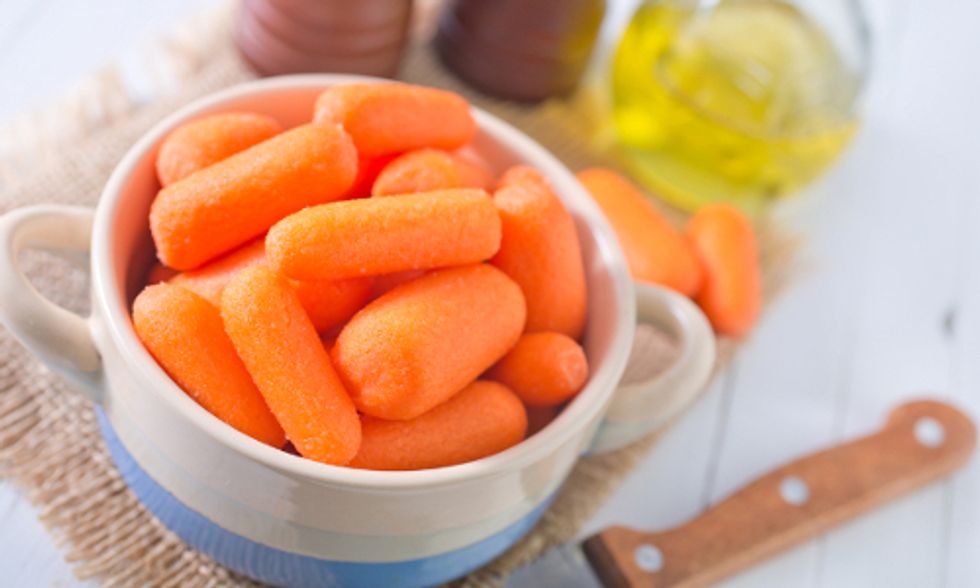 Baby carrots are a great way to get kids to snack on veggies but are they really safe?

You've probably heard the stories about baby carrots, those convenient bags of snack-sized mini-carrots that have all but replaced the big ones that used to be standard. You may have heard that they are whittled down from old, misshapen, discarded full-sized carrots and soaked in chlorine to keep them fresh, that when they get that white film you sometimes see, that's the chlorine coming to the surface. So the next time you're in the store, you notice the bag doesn't actually say "baby carrots," but rather "baby cut carrots," and you hesitate to buy them.

"Baby carrots have become a lunch box staple," it says, revealing that they first appeared in U.S. supermarkets in 1989. "Parents love them for their convenience and because they're seen as a healthy food choice. Kids love them because they're sweet and fun to eat. But what's the real deal behind baby carrots? After all, they're not like regular carrots. They're perfectly shaped with rounded edges; they don't have the same thick core; and, even peeled, they are bright orange. A quick Google search of baby carrots turns up some frightening information, and misinformation, on how they are made and whether they are really "'soaked in chlorine.'"So what's the real story? The World Carrot Museum is a website based in the UK, and it can tell you everything you might conceivably want to know about carrots, baby or otherwise.

The supermarket baby carrots are not true baby carrots—varieties such as Adelaide and Caracas that only grow to a smaller size than the typical 7-8 inch carrot or longer varieties harvested early. Here's how they came to be, according to the World Carrot Museum:

"In the 1980s supermarkets expected carrots to be a particular size, shape and color. Anything else had to be sold for juice or processing or animal feed or just thrown away. One farmer wondered what would happen if he peeled the skin off the gnarly carrots, cut them into pieces and sold them in bags. He made up a few test batches to show his buyers. One batch, cut into 1-inch bites and peeled round, he called 'bunny balls.' Another batch, peeled and cut 2 inches long, looked like little baby carrots. Bunny balls never made it. But baby carrots were a hit. They transformed the whole industry."

Since then, carrots have been specially bred to make baby carrots: sweeter, uniformly colored, longer and thinner to make them easily cut to similar size.

So what about the chlorine? And the white film? Bolthouse Farms, the world's biggest producer of cut and baby carrots, has obviously heard these stories many times too, because its got a webpage called "The Truth About Baby Carrots."

It explains that the baby carrots are indeed washed in a chlorinated water solution—not the same as the chlorine used to disinfect swimming pools—to kill bacteria and other potential contamination and then rinsed. But so are many other pre-packaged vegetables such as salad mixes. If that makes you uneasy, go organic. "Organic growers use a citrus based non-toxic solution called citrox, the natural alternative to synthetic biocides for the decontamination of fresh produce, food and beverages," says the World Carrot Museum.

As for the white residue, that's not any sort of chemical. It's just a sign the carrot is drying out and its color should be restored by soaking it in water for a few minutes. Baby carrots are more prone to this drying appearance because the outer skin has been removed and their entire surface exposed. The same thing would happen to the exposed end of a large carrot if you cut it. If you're into science, the World Carrot Museum can give you more information than you ever dreamed you needed on the natural processes that make this happen.

The lack of peel points to the actual drawback of baby carrots: much of the nutritional value of a carrot is in the peel. But even baby carrots provide a good dose of powerful nutrients, such as beta-carotene, which is crucial to eye health, as well as vitamins A, B, C and E, and minerals such as potassium, copper and magnesium. They're low in calories as well. And if sweet, crunchy, bite-sized carrots are what it takes to get your child to eat his vegetables, then toss that bag in your shopping cart.