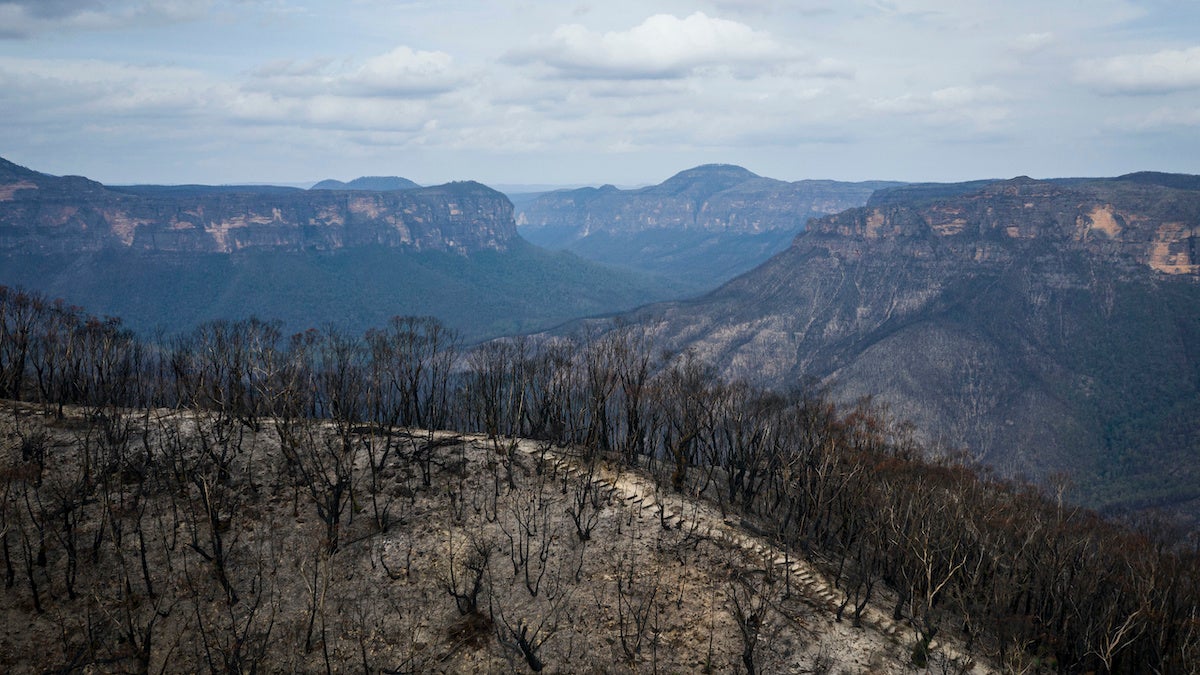 A general view of fire damaged country in the The Greater Blue Mountains World Heritage Area near the town of Blackheath on Feb. 21, 2020 in Blackheath, Australia. Brook Mitchell / Getty Images

In a post-mortem of the Australian bushfires, which raged for five months, scientists have concluded that their intensity and duration far surpassed what climate models had predicted, according to a study published yesterday in Nature Climate Change.

The bushfires were far more catastrophic than any climate crisis models out there, leading the scientists to call the devastation, “a fiery wake-up call for climate science,” as the BBC reported.

The study said that the bushfires were “unprecedented” after they burned more than one-fifth of the country’s forests.

“This [was] worse than anything our models simulated,” said climate scientist Benjamin Sanderson to the BBC. Sanderson, a scientist at the National Center for Atmospheric Research in Boulder, co-wrote the article in Nature Climate Change.

Sanderson and his co-author wrote, “This is perhaps one of the first really big cases where we’ve seen the real world do something before we’ve been able to have the capacity to model it properly. This event was worse than anything in any of the models at any point in this century. Only one of the models toward the end of the century started producing things of this magnitude.”

He warned that as the planet warms, “the more likely we are to be taken by surprise,” as Yahoo News reported.

While climate models to date have been fairly accurate in predicting how much temperatures will rise as greenhouse gases are emitted, modeling fires is extremely complex. Fire threats are determined by many variables that increase risk of fire, fuel it and spread it, including rainfall, wind, land cover and population density, as the BBC reported.

“But even if you look at the few models that have fire in them,” Sanderson told BBC News, “none of them simulate anything close to the scale of what happened in Australia.”

Sanderson suggested that scientists need a more extensive view of what the future will possibly look like.

“Rather than running one simulation that looks as close as possible to the real world, we need to start creating thousands of different versions of the future,” he said, as Yahoo News reported.

The importance of developing a full understanding of the cataclysmic effects of the climate crisis continues to grow as we head into uncharted territory, according to the BBC.

John Marsham, a climate scientist at the University of Leeds, told the BBC that climate models should start to take wildfires into account.

“We also need to consider what the full range of possible future scenarios is, rather than just focusing on the most likely one scenario,” said Marsham “[This is particularly crucial] where there are risks of catastrophic consequences.”

Of course, there are challenges to running more advanced climate models. Creating comprehensive models requires a tremendous amount of data. It requires supercomputers, and the time and resources to produce various models.

“It takes huge amounts of energy and computation to run a single simulation,” said Sanderson, as Wired reported. “We backed ourselves into a corner with climate science where our models are so computationally expensive, we can’t really afford to run them more than once.”