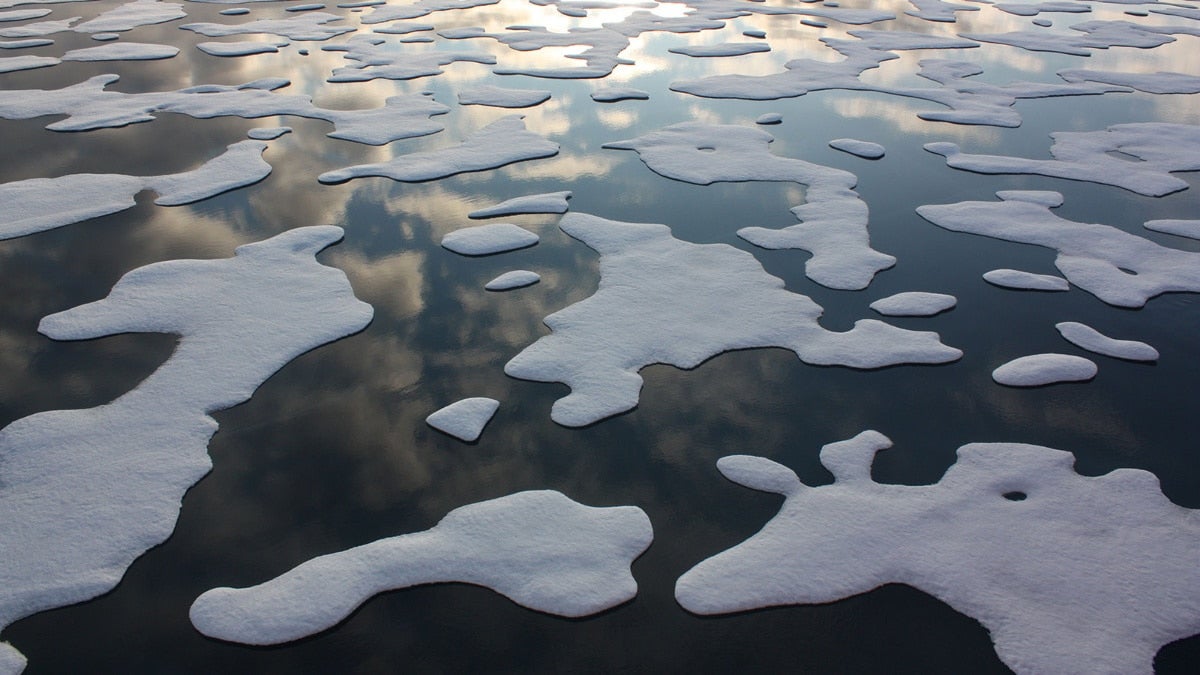 Arctic sea ice is photographed in 2011 during NASA's ICESCAPE mission, a shipborne investigation to study how changing conditions in the Arctic affect the ocean's chemistry and ecosystems. Kathryn Hansen / NASA

A recent Science Magazine feature blamed an underwater heat blob for exacerbating sea ice loss as it proclaimed what many Arctic scientists already know: Arctic sea ice is racing toward its demise.

Even without the blob, ice levels were already catastrophically low.

“There can be little doubt that the vast majority of Earth’s ice loss is a direct consequence of climate warming,” UK scientists from Leeds and Edinburgh universities and University College London researching the massive ice loss wrote in their review paper, The Guardian reported.

One study from the University of Copenhagen determined that Arctic sea ice is melting faster than climate models had predicted because they use a “slow and steady” temperature increase model for the Arctic, but warming is actually happening at a more rapid pace, reported Barron’s. The Arctic is warming at least twice as fast as the rest of the globe, a different study found, and this is speeding sea ice loss.

“We have been clearly underestimating the rate of temperature increases in the atmosphere nearest to the sea level, which has ultimately caused sea ice to disappear faster than we had anticipated,” University of Copenhagen professor and researcher Jens Hesselbjerg Christensen told Barron’s.

The last time the Arctic Ocean saw such unusually high temperatures was during the previous ice age, Barron’s reported. Christensen warned that scientists had yet to realize the significance of this steep temperature rise, Futurity reported.

“We have looked at the climate models analyzed and assessed by the UN Climate Panel. Only those models based on the worst-case scenario, with the highest carbon dioxide emissions, come close to what our temperature measurements show over the past 40 years, from 1979 to today,” Christensen told Futurity.

A third set of researchers also recently determined that Greenland’s ice sheet has reached the “point of no return,” and that it would continue to shrink even if global warming were to end today, Barron’s reported.

None of this bodes well for the sea ice. September is when the ice usually reaches its annual minimum, and this year’s extent is scheduled to be among the lowest on record, Science Magazine reported. The sum of this evidence has led some scientists to posture a total loss of Arctic sea ice by 2035.

“It’s definitely a when, not an if,” Alek Petty, a polar scientist at NASA’s Goddard Space Flight Center, told Science Magazine.

Unfortunately, many of these dire predictions do not take into account what’s happening below the water’s surface, where a heat blob is melting sea ice from below as the warmer climate assails it from above.

The Arctic Ocean enjoys an “unusual temperature inversion” where deeper water is warmer than surface waters, according to Science Magazine. Chilly winter air and buoyant, cold freshwater coming off the Eurasian continent help to keep the ice’s surface cold and the underside from melting under the sun, Science Magazine explained.

The warmer, saltier Atlantic Ocean water congregates in a deep heat blob that was presumed “safely separated” from the sea ice, but a recent study published in the Journal of Climate found that the blob is growing, migrating vertically, and melting the ice from below.

The study found that as brighter, reflective sea ice melts, darker water flows in to take its place. That water then absorbs more heat and sinks down to the blob, where it causes the blob to grow and warm even further.

Measurements indicated that the blob, usually found 150 meters below the sea ice or deeper, has moved up to within 80 meters of the surface. Water turbulence can then cause some of that blob heat to reach the sea ice and melt it, Igor Polyakov, an oceanographer at the University of Alaska, Fairbanks, told Science Magazine.

Scientists now think the blob has enough heat to melt the Arctic’s ice three to four times over, and estimate that it could “devour the ice from below” if the blob ever reaches the surface sea ice, Science Magazine reported.

The process is called “Atlantification,” and has already been observed in the Barents Sea north of Norway, where warm Atlantic waters have risen up to melt sea ice from below, even during cold winter months, according to Science Magazine and a study published in Nature Climate Change. Scientists expect Atlantification to continue to decimate sea ice throughout the Arctic as the heat blob grows and rises.

The downstream effect of this massive melt would be felt in ways that are still unknown. Previous studies have linked Arctic ice loss to a number of different global phenomena, such as changing ocean currents and extreme weather in California.