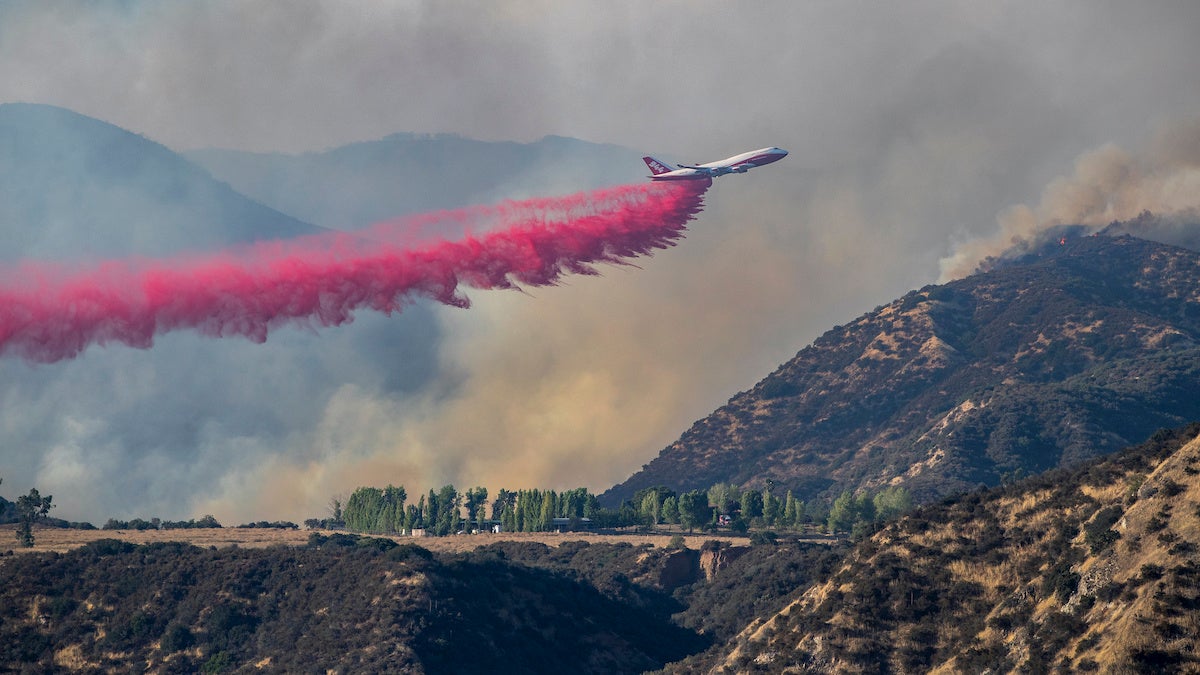 A plane drops fire retardant over a home as the Apple Fire burns during the coronavirus pandemic on Aug. 1, 2020 in Cherry Valley, California. Gina Ferazzi / Los Angeles Times via Getty Images

Southern California‘s first major wildfire this year has devoured more than 20,000 acres since Friday and forced thousands to flee their homes in the midst of a pandemic.

The Apple Fire sparked around 5 p.m. on Friday in Cherry Valley in Riverside County, The San Bernardino Sun reported. Dry air and vegetation fanned the flames, and it is now 20,516 acres and only five percent contained, according to the most recent update from the U.S. Forest Service.

“The fuels are there, and they’re ripe,” Daron Wyatt, a spokesman for area incident commanders, told The San Bernardino Sun.

#AppleFire timelapse between 9 and 10 PM August 1st. Taken from Mt. Edna just south of Banning. This is just showing a small portion of the overall fire. pic.twitter.com/wQ7KnbSOhU

The blaze has forced around 7,800 people to flee their homes, the Riverside County Fire Department said, according to CNN. But the evacuations have been complicated by the coronavirus pandemic. California has the most cases of any state in the nation and, as of Friday, had broken its daily death record four times in a little over a week, The Guardian reported.

How do you evacuate 7,800 people in a pandemic? A question I was hoping we wouldn't have to answer but wildfire & hurricane seasons continue apace. This is the layering of crises we've been talking about on @RealHotTake. Handling one at a time is a luxury afforded to very few. https://t.co/SBYe1UCYwO

Evacuation centers have been set up at hotels and at Beaumont High School, with measures like temperature checks, mask wearing and social distancing in place, Riverside County Fire Department spokesperson Rob Roseen told CNN. But evacuees are still wary of seeking shelter in the school.

“Folks not taking advantage of it over concerns about COVID-19, we have measures in place. We planned for this months ahead,” Capt. Fernando Herrera of Cal Fire told CBS Los Angeles.

Instead, the Red Cross has been helping evacuees find hotel rooms, according to LAIst, and families like the Mejias have stopped by the high school asking for their assistance in booking these rooms.

Marcella Mejia fled with her husband, three children, two dogs and 15 chickens Friday night when firefighters knocked on their door and told them to leave. They stayed with neighbors for the first two nights, but then Marcella came seeking out a room.

“We were told when we moved to Banning that it was a very high-risk area for fires,” Mejia told LAIst. “But you never imagine this happening.”

However, Red Cross volunteer Chris Ellsworth said it was sometimes difficult to find rooms immediately because the Red Cross, fire departments and individuals were all looking at once.

“You have a number of different groups of people looking for the same set of limited resources,” Ellsworth told LAIst.

As of Sunday afternoon, the Red Cross had only helped fewer than 40 people.

So far, no one has been injured in the blaze, but one home and two outbuildings were destroyed, CNN reported.

The Apple Fire in the midst of a pandemic is also an example of how crises can compound each other. The climate crisis is making California’s wildfires larger and more extreme, National Geographic pointed out. The state has warmed by about three degrees Fahrenheit this century, and warmer air means drier vegetation.

The Apple Fire in particular is being fueled by vegetation with record-low moisture levels, according to the Forest Service, as well as hot, dry air. Those fire-friendly weather conditions are expected to continue for the next few days.

The fire is also difficult to fight because its north and east sides are burning on steep hillsides that firefighting vehicles cannot access.

The way it is burning also means that it is not safe for firefighters to try and surround it.

“We don’t want to put firefighters in a dangerous situation,” U.S. Forest Service spokesperson Lisa Cox told The San Bernardino Sun. “It’s burning in a straight line up a mountain.”

There are 29 hand-crews, 9 Helicopters, 260 Engines, 11 Dozers and 48 Water Tenders battling the blaze, according to the Forest Service.

Smoke from the fire has drifted as far as Phoenix, Arizona.

Incredible GOES-West satellite imagery showing smoke from the #AppleFire making it all the way to #Phoenix this morning!😲#CAwx #AZwx pic.twitter.com/lTAALjAXnL

Locally, the smoke was expected to cause unhealthful air quality in San Gorgonio Pass, the Coachella Valley and eastern Riverside County, according to The San Bernardino Sun.