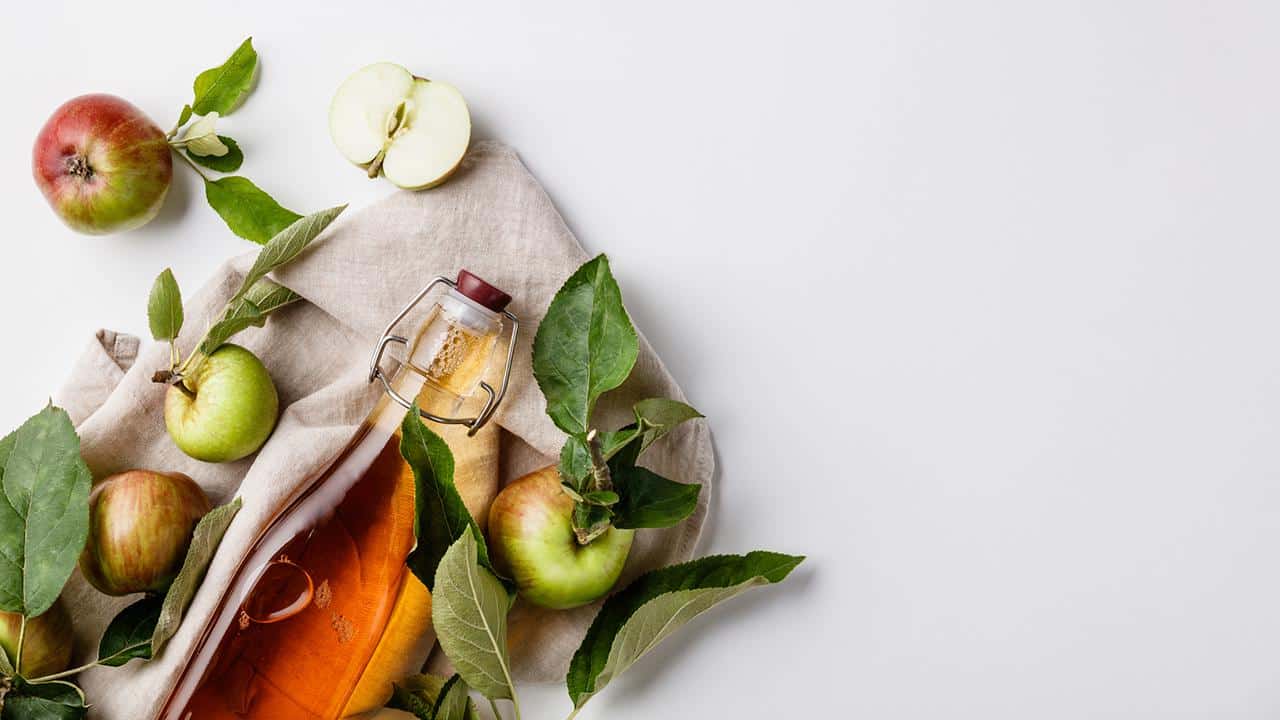 When most of us think of vinegar, we think of cleaning supplies, or maybe a tang to add to a salad or marinade. We rarely think of vinegar as a component to good health, but some studies suggest that apple cider vinegar, in particular, may have benefits when added to your diet.

Apple cider vinegar goes through the fermenting process twice. First, manufacturers add yeast to crushed apples, which turns their sugars into alcohol. Next, they add bacteria which furthers the fermenting process and turns the alcohol into acetic acid. The 5-to-6 percent acid content is what gives vinegar its strong scent and taste.

You might notice a cloudy substance hanging out toward the bottom of your vinegar bottle, and that’s supposed to be there. It’s called “the mother” and it is composed of that yeast/bacteria mix in the fermenting process. It counts as a probiotic and gives the vinegar a supplemental boost in addition to the B-vitamins and polyphenols found in it.

This vinegar has been known as a home remedy for everything from a sore throat to varicose veins to dandruff, but science only supports some of these claims. So, which benefits does apple cider actually have?

Studies show that vinegar of all kinds help kill pathogens, including bacteria. This is why we associate vinegar with disinfecting and cleaning. This power also makes vinegar a preservative by stopping the growth of food spoiling bacteria like E. coli.

Researchers proved this by treating groups of tainted arugula with one of the following: vinegar, lemon juice or a combination of both. Both the juice and vinegar decreased the growat of Salmonella, and the mixture dropped the bacteria levels to nearly undectable.

While the most effective way to regulate blood sugar levels is avoiding sugar and processed carbohydrates, apple cider vinegar has been shown to improve insulin sensitivity.

One study showed that apple cider vinegar lowered blood sugar and insulin response by improving insulin sensitivity by more than 20 percent. The participants ate a bagel with butter and orange juice, then got either 20 grams of apple cider vinegar or a placebo. Those taking the vinegar posted significantly lower blood glucose levels after the meal. The results have been replicated in both healthy people and those with diabetes. Other studies confirm that apple cider vinegar improves insulin function and lowers blood sugar, which can be very helpful for those with pre-diabetes or Type 2 diabetes.

The vinegar works similarly to a blood sugar lowering drug called metformin, and those who benefit most from this treatment seem to be those who are insulin-resistant.

3. It can help you lose weight.

Vinegar has been shown to increase feelings of fullness, which can lead to weight loss when people consume fewer calories but no longer feel hungry. In one study, participants taking vinegar alongside a meal ate 200-275 calories less throughout the day.

Not only that, but a study on those with obesity showed apple cider vinegar lowered belly fat and led to weight loss. One tablespoon led to a loss of 2.6 pounds and people taking two tablespoons lost on average 3.7 pounds. The study, however, lasted for three months, so the weight loss was moderate to low.

The benefits of apple cider vinegar with regard to weight loss need to be further studied, but scientists agree that it won’t hurt.

4. It can improve heart health.

High cholesterol levels and triglycerides are risk factors for heart disease, and some studies link apple cider vinegar to lowering those levels. Unlike the other benefits associated with apple cider vinegar, the heart healthy studies have been done mostly on animals. The vinegar also reduced blood pressure in rats. High blood pressure and hypertension can lead to heart disease and kidney problems.

We need to conduct human studies to conclusively prove any benefits to human heart health, but as before, scientists say adding it to your regimen won’t cause any harm.

Put away that skin cream and break out the vinegar. For years, apple cider vinegar has been used on dry skin and even eczema because the epidermis is slightly acidic and topical apple cider vinegar is thought to help balance the natural pH and improve the protective layer where more traditional soaps might exacerbate the skin’s dryness.

As mentioned before, apple cider vinegar also has anti-bacterial properties, which could possibly limit topical infections, which is why it is sometimes added to face wash or toner in a very diluted form.

Still, researchers at the American Academy of Dermatology don’t recommend apple cider vinegar for serious skin health, preventative measures or rejuvenation. While it has drying capacity, experts maintain there are other, more effective products for heavy-duty skin care.

Keep in mind that vinegar is potent, and when you use it, you should dilute it in water or tea, or take it with food. There are also some drawbacks to consider before making it a regular part of your routine. Apple cider vinegar could lower potassium levels, so make sure you don’t suffer from hypokalemia before taking it. If you are on any medications (including insulin), check with your doctor to make sure the vinegar won’t interact poorly with them. And finally, if you experience any nausea from the vinegar, your body is probably sensitive to its strong sour acidity, so consider alternative methods to health.

Darlena Cunha is a freelance writer and a professor at the University of Florida, with degrees in communications and ecology.