Amidst Mega-Drought Hundreds Urge Gov. Brown to Ban Fracking at State of the State Address 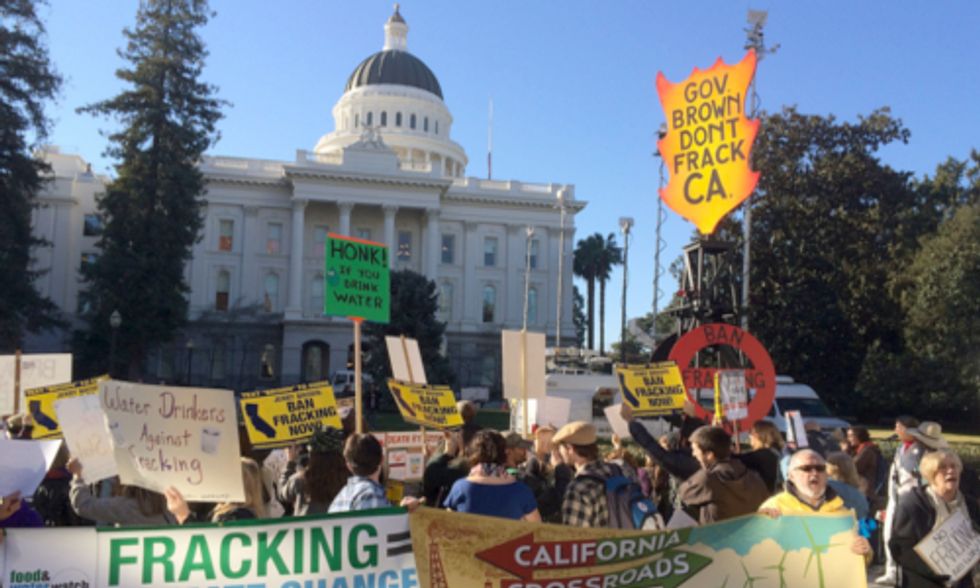 Around 200 concerned Californians gathered outside the Capitol building today to urge Gov. Brown (D-CA) to mitigate the state’s drought by halting the water-intensive drilling technique called fracking, and other extreme oil extraction methods.

Activists unfurled a three-story banner across the street from the State House, where Gov. Brown was giving his State of the State address. Photo credit: Food & Water Watch

The protest—which took place while Gov. Brown gave his State of the State Address before a joint session of the California Legislature—represented Californians from across the state and was organized by 350.org, California State Grange, Center for Biological Diversity, Center on Race, Poverty and the Environment, CREDO, Food & Water Watch, Friends of the Earth, Oil Change International and other members of the statewide coalition Californians Against Fracking.

While the protest took place on the lawn of the Capitol building, activists from Oil Change International and 350.org deployed a three-story banner across from the State House with the message: “Governor Brown: Climate Leaders Don’t Frack. Ban Fracking Now."

“By allowing fracking to happen in California, Jerry Brown’s actions are in direct conflict with his rhetoric today on water conservation and climate change,” said Food & Water Watch California Director Adam Scow. “Brown’s current water and energy policies mismanage the people of California’s water supply, and this—not his ‘green’ talk—will be what defines his legacy.”

"California is facing both a water crisis and a climate crisis, both of which would be made worse by fracking," said Hollin Kretzmann, an attorney with the Center for Biological Diversity. "Gov. Brown has a huge opportunity to tackle both these challenges by banning fracking. A ban would prove he is a strong leader when it comes to protecting Californians."

“Having just declared a drought emergency, it’s time for Gov. Brown to face the facts and recognize that digging up and burning California’s reserves of dirty shale oil is only going to make this crisis worse,” said Ross Hammond, senior campaigner, Friends of the Earth.

The protesters were concerned with rules recently proposed by state officials that will actually open the door to fracking in California. Photo credit: Food & Water Watch

"It's hypocritical for Gov. Brown to ask Californians to cut their personal water usage while pushing a plan that would allow the fracking industry to massively increase the amount of water it consumes and contaminates," said Zack Malitz, CREDO's campaign manager. "If Gov. Brown moves forward with his fracking plan, he'll be forcing farmers and ranchers to compete with the fracking industry for water while exacerbating climate change and making California even more vulnerable to extreme drought in the future."

Since the launch of Californians Against Fracking in May of 2013, more than 200,000 petitions have been signed urging Gov. Brown to ban fracking in California. Farmers, environmental justice groups, public health advocates, local elected officials, students, celebrities and many others are calling on Gov. Brown to halt fracking in California. Most recently, on Jan. 14, Californians Against Fracking delivered more than 100,000 public comments denouncing Gov. Brown's fracking regulations and calling for a ban on fracking.