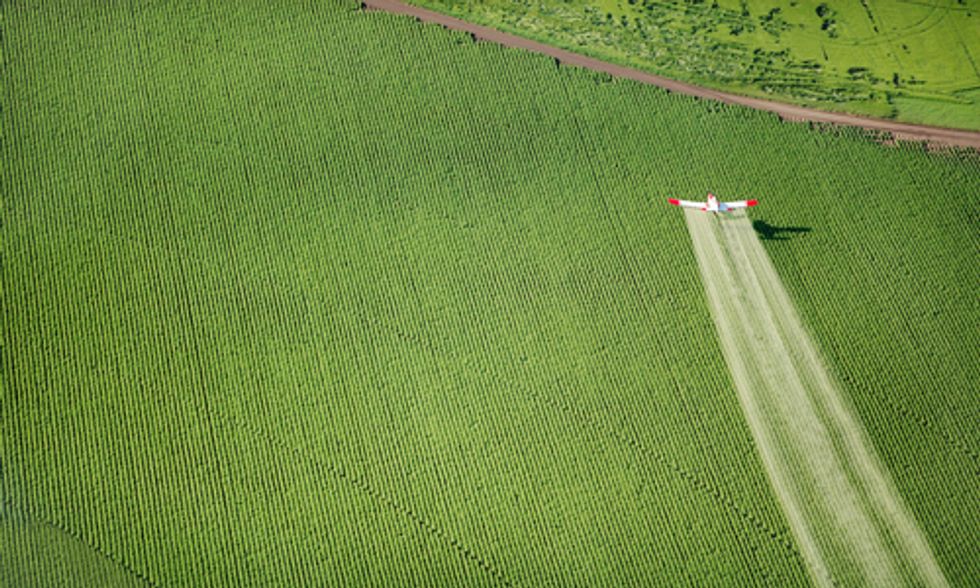 On today's United Nations biodiversity day, we are being asked to focus on small islands and their unique ecology and fragility in times of globally pervasive threats such as climate change.

But, the whole planet is a small island in the vast sea of space, capable of producing food for all as a consequence of rich biodiversity. That diversity is under threat; our actions can strengthen it or weaken it. Our agriculture systems can help mitigate climate change and feed us, or they can accelerate the change and contribute to hunger.

The food system we choose has a direct impact on which type of world we will have. It's the difference between a field that hums and is robust with life, or one which is dusty, dry and dead. It's the difference between a place where ecological farming has been used or where a cocktail of industrial chemicals has soaked into the soil where the same crop is grown, decade after decade.

Our current food and farming system is creating more and more of these dry, dead ends. It is agriculture characterised by three things: the industrial-sized growing of a single plant, or "monoculture," genetically engineered (GE) crops, and repeated toxic chemical infusions of pesticides and the application of synthetic fertilisers. All of these harm people and the farming ecosystems they depend on.

Just one example of the consequences of the current flawed agricultural system is the current catastrophic bee decline. Bees are being decimated in Europe and North America by the intensive use of chemical pesticides. In recent winters bee mortality in Europe has averaged at about 20 percent. A third of the food that we eat every day depends on bees and other insect pollinators.

This dead-end road sees large multinational corporations persuading farmers to buy GE seeds based on the premise that they will increase yields, despite studies suggesting otherwise. Instead, they only increase farmers' indebtedness by failing to deliver the promised return on investment–turning them into slaves to a pesticide treadmill as superweeds develop. This is the ugly story behind the majority of the food we consume.

This cycle increases our dependency on fossil fuels and contributes to climate change, as the Intergovernmental Panel on Climate Change (IPCC) study recently reported. In fact, climate change affects this broken food system. Among other impacts, climate shocks cause food prices to rise, with deadly consequences in developing countries.

Climate change is estimated to have increased the amount spent on food worldwide by $50bn a year. Climate change is also making food less nutritious according to a study published in Nature, with important staple crops such as wheat and maize containing fewer essential nutrients like zinc and iron. Projections show that up to 21 percent more children globally will be at risk of hunger by 2050.

Industrial agriculture does not rely on diversification but on the standardisation and homogenisation of biological processes, technologies and products. It promotes off-the-shelf, one-size-fits-all solutions to food and farming around the world and in so doing undermines local and natural diversity, which are essential for resilience to climate change.

Ecological farming increases resilience to climate shocks. It is based on the diversity of nature to produce healthy food for all: diversity of seeds and plants; diversity of many different crops grown in the same field; diversity of insects that pollinate (like bees) or eliminate pests; and diversity of farming systems that mix crops with livestock.

Scientists from Wageningen University in the Netherlands, for example, recently found that certain beans greatly improve poor soils, increase productivity of maize when grown together and respond well to drought. They can be used for food, animal feed, and soil fertility. Researchers found that growing maize and beans at the same time increased farmers' income by 67 percent without the use of any chemical fertilisers.

Ecological farming also relies on the innovations of farmers that enable adaptation to local conditions. It's the redeployment of traditional knowledge to counteract the impacts of climate change. In northeast Thailand, jasmine rice farmers have been adapting to increased drought by finding creative ways to use water resources—stock ponds for storage and simple wind-powered pumps made with locally available materials—which have been shown to increase yields and provide a safety net when drought strikes.

Ecological farming effectively contributes to climate change mitigation. Industrial farming is a massive greenhouse gas (GHG) emitter. Agriculture, in fact, accounts for between 17 percent and 32 percent of all the emissions caused by humans, according to research for Greenpeace. Stopping chemical nitrogen fertiliser overuse and shifting to organic fertilisers (to increase soil fertility), improving water management in paddy rice production and increasing agro-biodiversity through agroforestry are just a few examples of how ecological farming practices and diversity could directly contribute to GHG reduction and help agriculture reduce the effects of climate change.

Agriculture is now at a crossroads: we can pursue the dystopian dead-end road of industrial chemical-intensive farming or choose diverse and resilient ecological farming.

Governments, donors, philanthropists and the private sector must start shifting funds towards research to generate new knowledge on biodiversity-rich ecological farming and services to disseminate diversified practices that are locally relevant. We must reject the dead-end trap of industrial agriculture and choose instead a food system that celebrates biodiversity and is healthy for people and the planet.

Article originally published in the Guardian.