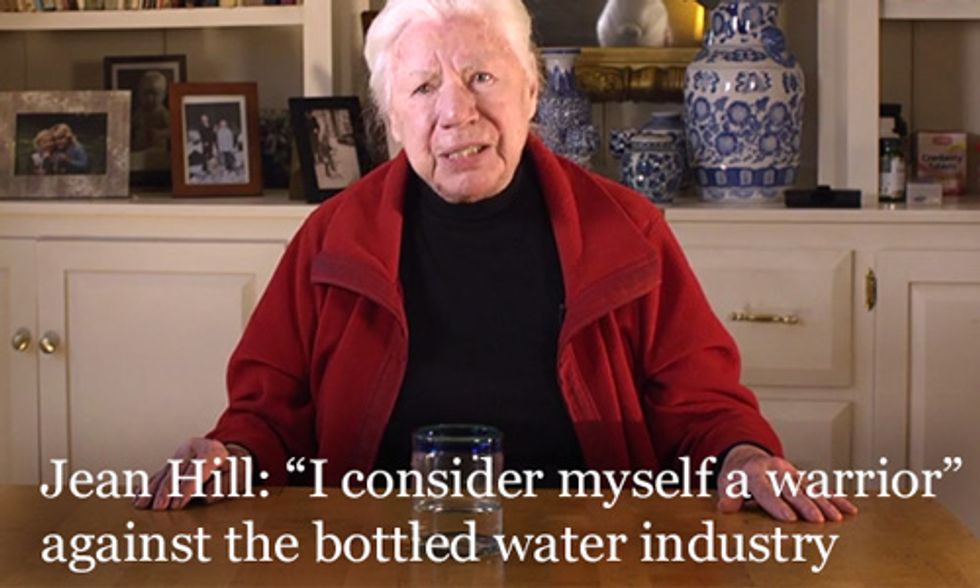 "I'm going to keep on going because I'm too mean to die." These are the words of Jean Hill, resident of Concord, Massachusetts and star of a new documentary, Divide In Concord, which follows the entertaining tale of Hill and fellow activists' campaign to ban bottled water in their small town.

Concord, birthplace of the American Revolution and Henry David Thoreau, is the perfect place for a 21st century environmental battle, and this saga has all of the elements of a good fight.

Hill, a fiery 84-year-old grandmother, was inspired to propose a bylaw to ban the sale of single-serve plastic bottles after her grandson told her about the disastrous environmental impacts of plastic bottles. Of course, the proposed bylaw has some ardent opponents. Leading the charge against the ban is Adriana Cohen, a model and celebrity publicist, who calls the ban "an attack on freedom" (you can't make this up).

On the one side you have residents like Jill Appel who say, "This is a perfect way to respond at a community level to the power of corporations." And on the other side you have local merchants like Jim Crosby who argue that "this could cause some serious damage to the local businesses in Concord."

The documentary even draws upon a Thoreau scholar, Tom Blanding, to provide an important historical context: “Sometimes we think of Thoreau as being very radical in his thought, but he’s calling for a balance between civilization and nature. So if he seems extreme in his position, its because we’ve become so extreme in ours.” I think we know where Thoreau would stand on the bottled water issue.

Just as it looks as if Hill has the support for the ban, the bottled water industry gets involved and the fight drags on. "The town is abuzz as Patriot’s Day celebrations begin. War re-enactors take the field, cannons fire at dawn and the parades commence. April’s Town Meeting provides the stage for Concord’s latest battle."

Watch the trailer to see how one community can spark a revolution: