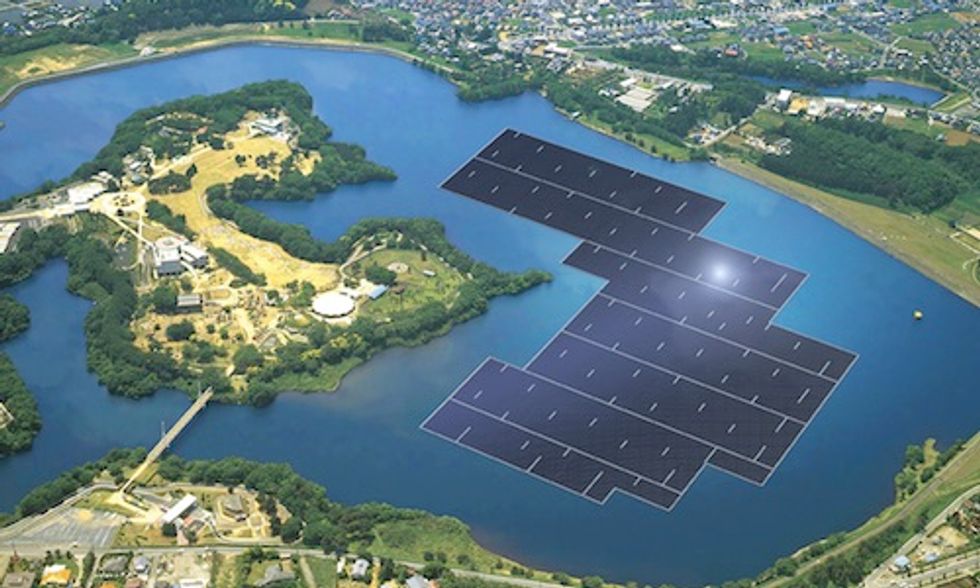 Floating solar projects are popping up in all corners of the world, from Japan, the UK, Brazil, the U.S. and Australia.

A rendering of the 13.7 megawatt plant on the Yamakura Dam reservoir in Japan, which will be the largest floating solar plant in the world once construction is complete. Photo credit: Kyocera

There are a number of benefits to floating solar plants, aka "floatovoltaics." Compared to mounted panels, floating systems are naturally cooled by the bodies of water they sit on, therefore boosting power production efficiency. Many floating PV developers point out that the floatovoltaics shade the water, which reduces water evaporation and slow algae blooms.

“The efficiencies are what motivated us to look at this,” Rajesh Nellore, the chief executive of Infratech Industries, told the New York Times.

The plant floats on a wastewater facility in Jamestown and is the first part of a larger system that will cover five basins, the company says on its website. The system consists of raft supporting standard photovoltaic panels, which are specially coated to prevent corrosion, due to their close proximity to water.

Another plus of floating arrays is how it makes use of unused space. In the UK, a 6.3 megawatt floating solar project consisting of 23,000 solar panels sits on Walton-on-Thames' Queen Elizabeth II reservoir, an area that isn't used for any other purpose, The Guardian reported. The £6 million (about $8 million) project will help power local water treatment plants that provide clean drinking water to London and south-east England’s 10 million residents.

At roughly the size of eight soccer stadiums, the Thames Water floating solar array will briefly hold the title of world's largest floating solar facility before Japan’s mega-solar farm finishes in 2018, which will have a capacity of 13.7 megawatts. The New York Times noted that if everything goes as planned in the next two years, the 50,904 panels that will float atop the Yamakura Dam reservoir in Japan will generate an estimated 16,170 megawatt hours annually or enough electricity to power almost 5,000 homes.

The company behind Japan's massive solar plant, Kyocera TCL Solar, started construction in January this year and explained why floatovoltaics are ideal.

"With the decrease in tracts of land suitable for utility-scale solar power plants in Japan due to the rapid implementation of solar power, Kyocera TCL Solar has been developing floating solar power plants since 2014, which utilize Japan’s abundant water surfaces of reservoirs for agricultural and flood-control purposes," the company said in a press release.

Solar is also an increasingly attractive option for regions or countries that are going through drought. With Brazil's historic drought drying up its hydroelectric plants, the South American country is turning to solar power to diversify its energy mix to stave off a potential power crisis.

The nation announced last year it would commence pilot tests of a 350 megawatt floating solar farm located atop the Balbina hydroelectric plant in the Amazon.

According to PV Magazine, Brazil switched on the first 10 megawatt stage of its floating Ballina plant in March.

Another advantage of floating solar systems is that they can be hidden from public view, which is a factor that led the California nonprofit Sonoma Clean Power to pursue the technology, the New York Times reported.

“Sonoma County boasts some of the most beautiful rolling hills, and people don’t want to see them covered by solar panels,” Rebecca Simonson, a senior power analyst for the renewable energy developer, told the publication.

The Times reported that the company has signed purchasing agreements for floating solar arrays to be built on six treated water ponds in the county. The solar panels, Simonson said, would not be visible from the road.