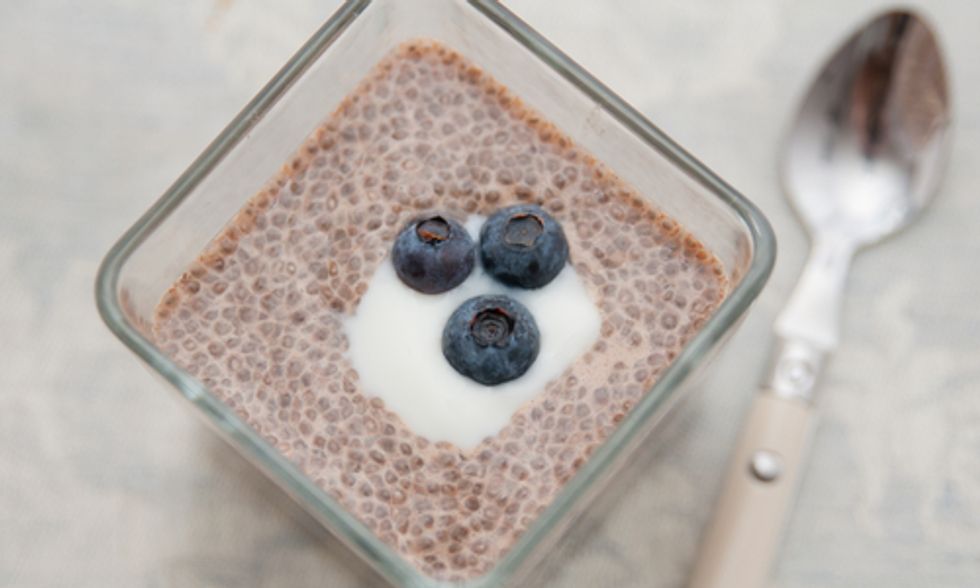 Chia seeds are among the healthiest foods on the planet. They are loaded with nutrients that can have important benefits for your body and brain.

Here are 11 health benefits of chia seeds that are supported by human studies.

Chia seeds are tiny black seeds from the plant Salvia Hispanica, which is related to mint. This plant grows natively in South America. Chia seeds were an important food for the Aztecs and Mayans back in the day. They prized them for their ability to provide sustainable energy … in fact, “chia" is the ancient Mayan word for “strength."

Despite their ancient history as a dietary staple, only recently did chia seeds become recognized as a modern day superfood. In the past few years, they have exploded in popularity and are now consumed by health conscious people all over the world.

Don't be fooled by the size … these tiny seeds pack a powerful nutritional punch.

This is particularly impressive when you consider that this is just a single ounce, which supplies only 137 calories and one gram of digestible carbohydrate! Just so that we're all on the same page, 1 ounce equals 28 grams, or about 2 tablespoons.

Interestingly … if you subtract the fiber, which may not end up as usable calories for the body, chia seeds only contain 101 calories per ounce. This makes them one of the world's best sources of several important nutrients, calorie for calorie.

To top things off, chia seeds are a “whole grain" food, are usually grown organically, are non-GMO and naturally free of gluten.

Bottom Line: Despite their tiny size, chia seeds are among the most nutritious foods on the planet. They are loaded with fiber, protein, Omega-3 fatty acids and various micronutrients.

2. Chia Seeds Are Loaded With Antioxidants

Another area where chia seeds shine is in their high amount of antioxidants. These antioxidants protect the sensitive fats in the seeds from going rancid.

Although antioxidant supplements are not very effective, getting antioxidants from foods can have positive effects on health. Most importantly, antioxidants fight the production of free radicals, which can damage molecules in cells and contribute to aging and diseases like cancer.

There are some claims online about chia seeds having more antioxidants than blueberries, but I was unable find a study to verify this claim.

Bottom Line: Chia seeds are high in antioxidants that help to protect the delicate fats in the seeds. They also have various benefits for health.

3. Almost All the Carbs in Them Are Fiber

Looking at the nutrition profile of chia seeds, you see that an ounce has 12 grams of “carbohydrate." However, 11 of those grams are fiber, which isn't digested by the body. Fiber doesn't raise blood sugar, doesn't require insulin to be disposed of and therefore shouldn't count as a carb.

The true carb content is only 1 gram per ounce, which is very low. This makes chia a low-carb friendly food. Because of all the fiber, chia seeds can absorb up to 10-12 times their weight in water, becoming gel-like and expanding in your stomach. Theoretically, this should increase fullness, slow absorption of your food and help you automatically eat fewer calories.

Fiber also feeds the friendly bacteria in the intestine, which is important because keeping your gut bugs well fed is absolutely crucial for health. Chia seeds are 40 percent fiber, by weight. This makes them one of the best sources of fiber in the world.

Bottom Line: Almost all of the carbohydrates in chia seeds are fiber. This gives them the ability to absorb 10-12 times their weight in water. Fiber also has various beneficial effects on health.

Chia seeds contain a decent amount of protein. By weight, they are about 14 percent protein, which is very high compared to most plants. They also contain a good balance of essential amino acids, so our bodies should be able to make use of the protein in them.

Protein has all sorts of benefits for health. It is also the most weight loss friendly nutrient in the diet, by far. A high protein intake reduces appetite and has been shown to reduce obsessive thoughts about food by 60 percent percent and the desire for night time snacking by 50 percent.

Chia seeds really are an excellent protein source, especially for people who eat little or no animal products.

Bottom Line: Chia seeds are high in quality protein, much higher than most plant foods. Protein is the most weight loss friendly macronutrient and can drastically reduce appetite and cravings.

5. Due to the High Fiber and Protein Content, Chia Seeds Should be Able to Help You Lose Weight

Many health experts believe that chia seeds can help with weight loss. The fiber absorbs large amounts of water and expands in the stomach, which should increase fullness and slow the absorption of food.

There have been several studies on glucomannan, a fiber that works in a similar way, showing that it can lead to weight loss. Then the protein in chia seeds could help to reduce appetite and food intake.

Unfortunately, when the effects of chia seeds on weight loss have been studied, the results have been rather disappointing. Although one study showed that chia seeds can reduce appetite, there was no significant effect on body weight.

Although just adding chia seeds to your diet is unlikely to affect your weight, I personally believe that they can be a useful addition. A weight loss diet is about more than just adding or subtracting single foods. The entire diet counts, as well as other lifestyle behaviors like sleep and exercise.

When combined with a real food-based diet and a healthy lifestyle, I can definitely see how chia seeds could help with weight loss.

Bottom Line: Chia seeds are high in protein and fiber, both of which have been shown to aid weight loss. However, the studies on chia seeds have not noted any effects on weight.

However, it's important to keep in mind that the Omega-3s in them are mostly ALA (Alpha Linolenic Acid), which is not as beneficial as you may think. ALA needs to converted into the “active" forms, EPA and DHA, before it can be used by the body. Unfortunately, humans are inefficient at converting ALA into the active forms. Therefore, plant Omega-3s tend to be vastly inferior to animal sources like fish.

Studies have shown that chia seeds (especially if they are milled) can increase blood levels of ALA and EPA, but not DHA, which is a problem. Because they don't supply any DHA (the most important Omega-3 fat), I think chia seeds are overrated as an Omega-3 source.

In order to get the DHA your body and brain desperately need, either eat fatty fish regularly, take fish oil or take a DHA supplement if you are vegan or vegetarian.

7. Chia Seeds May Improve Certain Blood Markers, Which Should Lower The Risk of Heart Disease and Type 2 Diabetes

Given that chia seeds are high in fiber, protein and Omega-3s, they should be able to improve metabolic health. This has been tested in several studies, but the results have been inconclusive.

In two studies, a diet with chia seeds, soy protein, oats and nopal, has been shown to lower LDL cholesterol and triglycerides, increase HDL cholesterol and reduce inflammation. Because these studies also used other ingredients, nothing can be concluded about the chia seeds themselves.

Rat studies have also shown that chia seeds can lower triglycerides, raise HDL (the “good") cholesterol and reduce inflammation, insulin resistance and belly fat. However, a study that looked at just chia seeds did not note any improvements.

Overall, it is possible that chia seeds can improve these risk factors, but probably won't have a major effect unless followed by other beneficial changes in the diet.

Bottom Line: The effects on cholesterol levels and other risk factors is inconclusive. Some studies show an effect, others do not.

8. They Are High in Many Important Bone Nutrients

Chia seeds are high in several nutrients that are important for bone health. This includes calcium, phosphorus, magnesium and protein. The calcium content is particularly impressive: 18 percent of the RDA in a single ounce. Gram for gram, this is higher than most dairy products.

Chia seeds may be considered an excellent source of calcium for people who don't eat dairy.

Bottom Line: Chia seeds are high in calcium, magnesium, phosphorus and protein. All of these nutrients are essential for bone health.

9. Chia Seeds Can Cause Major Improvements in Type 2 Diabetics

Blood pressure went down by 3-6 mm/Hg and an inflammatory marker called hs-CRP went down by 40 percent. A risk factor called vWF also decreased by 21 percent. There was also a small drop in blood sugar, but it wasn't statistically significant.

Given that chia seeds are high in fiber, it does seem plausible that they could help reduce blood sugar spikes after meals, but this needs to be confirmed in studies.

Bottom Line: A study in type 2 diabetics showed that chia seeds can significantly lower blood pressure and a marker for inflammation.

10. Chia Seeds Can Improve Exercise Performance as Much as a Sports Drink

Legend has it that the Aztecs and Mayans used chia seeds to fuel performance back in the day. There is one recent study suggesting that this may be effective. In this study, six participants “carb loaded" with either gatorade, or a mix of half Gatorade/half chia seeds. Then they ran for an hour on a treadmill, followed by a timed 10 kilometer long run. There was no difference between the two groups.

In other words, replacing half of the Gatorade with chia seeds did not reduce the performance of the athletes, indicating that chia seeds were of some use.

Bottom Line: One small study shows that chia seeds can partly replace Gatorade as a way of carb loading for endurance athletes, but this needs to be studied more.

11. Chia Seeds Are Easy to Incorporate Into Your Diet

Okay, this last one is not a health benefit, but important nonetheless. Chia seeds are incredibly easy to incorporate into your diet.

The seeds themselves taste rather bland, so you can add them to pretty much anything.They also don't need to be ground like flax seeds, which makes them much easier to prepare. They can be eaten raw, soaked in juice, added to porridges and puddings or added to baked goods. You can also sprinkle them on top of cereal, yogurt, vegetables or rice dishes.

Because of their ability to absorb both water and fat, they can be used to thicken sauces and even used as egg substitutes in recipes. They can also be mixed with water and turned into a gel. Adding chia seeds to recipes will dramatically boost the nutritional value.

If you want to buy chia seeds, then there is an excellent selection on Amazon with thousands of customer reviews.

They do seem to be well tolerated, but if you're not used to eating a lot of fiber, then there is a possibility of digestive side effects if you eat too much of them at a time.

A common dosage recommendation is 20 grams (about 1.5 tablespoons) of chia seeds, twice per day.

10 Ways to Teach Your Child to Eat Well