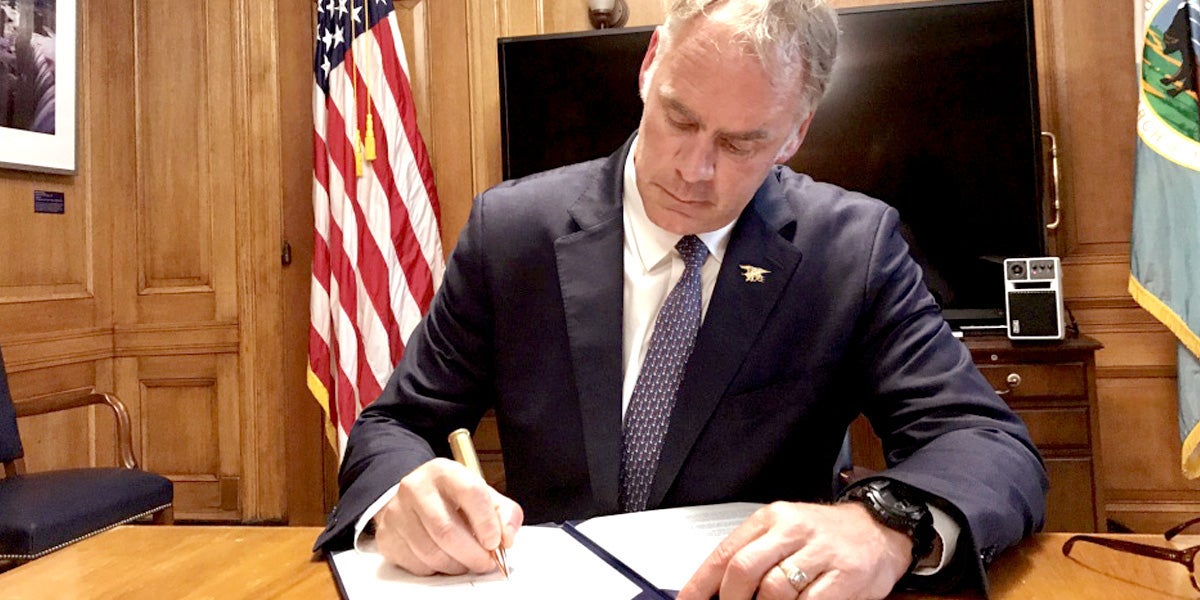 The webpage has gone through several revamps since Ryan Zinke took over the department in March. As reported by Motherboard, the current page, last updated on May 19, stresses “removing burdensome regulations at the Department” and omits language that emphasized developing renewable energy technologies.

Additionally, the first sentence of the new page states: “The U.S. Department of the Interior is the steward and manager of America’s natural resources including oil, gas, clean coal, hydropower, and renewable energy sources.”

The Interior Secretary seems to have a dismissive attitude towards renewables. Citing the overblown “wind kills birds” threat, Zinke said two months ago that “there’s no such thing as clean energy” as he officially lifted the Obama-era moratorium on federal coal leasing.

Earlier this month, Zinke kick-started plans to review oil and gas exploration in the Arctic and Atlantic Ocean.

Meanwhile, Zinke’s colleagues over at the Energy Department have a webpage dedicated to how renewable energy technologies can mitigate the harmful effects of climate change and that it “supports research and innovation that makes fossil energy technologies cleaner and less harmful to the people and the environment.”

The page also states that the department is “working to dramatically increase the efficiency of appliances, homes, businesses and vehicles.”

Ironically, the Energy Department’s work is being undermined by a slew of Trump policies. The president’s 2018 budget slashes funding for the Office of Energy Efficiency and Renewable Energy by a whopping 71.9 percent. Not only that, the administration has also proposed cuts on energy efficiency initiatives, from eliminating the popular Energy Star program to rolling back key vehicle emission standards.

Trump’s efforts to weaken pollution standards for vehicles is already being challenged by a coalition of 13 attorneys general and the Pennsylvania Department of Environmental Protection.

“Reducing pollution from cars and trucks is vital to New Yorkers’ and all Americans’ health and environment, as we protect the clean air we’ve worked so hard to achieve and fight climate change,” New York Attorney General Eric Schneiderman said.

“Any effort to roll back these affordable, achievable and common-sense vehicle emission standards would be both irrational and irresponsible. We stand ready to vigorously and aggressively challenge President Trump’s dangerous anti-environmental agenda in court—as we already have successfully done.”