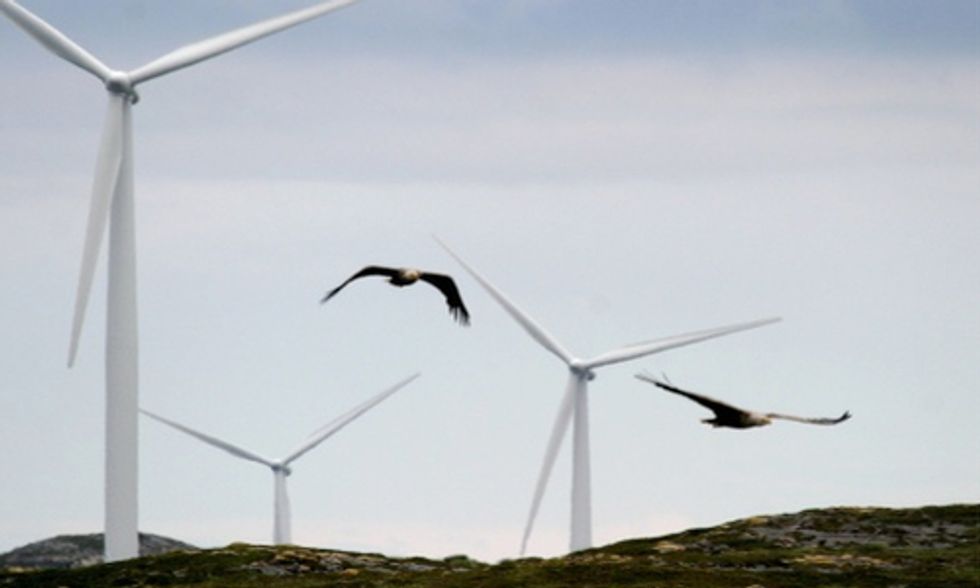 Wind energy is one of the cleanest, most abundant, sustainable and cost-effective ways to generate electricity. It’s also one of the fastest growing U.S. electricity sources. At the end of 2013, there were enough wind turbines across the country to power 15.5 million typical American homes and cut annual power sector carbon emissions by 4.4 percent. That amounts to 96 million metric tons, the equivalent of taking 20.2 million cars off the road.

Regardless, wind has its detractors, and one of their biggest complaints is the threat they say it poses to birds.

A recent study found that wind turbines in 10 states killed 85 eagles between 1997 and the end of June 2012—less than six per year on average. Photo credit: U.S. Forest Service

In fact, compared with other culprits, wind turbines are way down in the pecking order. The top human-built environmental threat to our feathered friends—besides habitat degradation and destruction—are buildings. As many as 970 million birds crash into them annually, according to a June 2013 study in the Wilson Journal of Ornithology. Other studies estimate that every year as many as 175 million birds die by flying into power lines, 72 million are poisoned by misapplied pesticides, 6.6 million perish by hitting communications towers; and as many as a million birds die in oil and gas industry fluid waste pits.

What about wind energy’s threat to eagles? A study in the September 2013 issue of the Journal of Raptor Research found that wind turbines in 10 states killed 85 eagles between 1997 and the end of June 2012—79 golden and six bald. That’s fewer than six a year on average, but most of the deaths occurred between 2008 and 2012 due to industry growth, and the study’s authors were quick to point out that the number of turbine-related eagle deaths is likely much higher. The study didn’t include wind industry-related eagle deaths in three other states as well at the 1980s-era Altamont Pass in Northern California, which has been killing an average of 67 eagles a year.

For discussion’s sake, let’s add the 67 eagle deaths a year at Altamont Pass to the 85 the study confirmed, which  amounts to 1,124 dead eagles over a 15-and-a-half-year period. How does that compare with overall non-natural eagle deaths?

When an eagle is killed and people find a carcass, the U.S. Fish and Wildlife Service (FWS) asks them to send it to the National Wildlife Property Repository near Denver, CO. About 2,500 show up every year, according to FWS, although certainly more go unreported. Using that number as a benchmark, the number of dead eagles annually from 1997 through June 2012 would amount to approximately 38,750 birds. Based on these admittedly crude estimates, only three percent of the eagle deaths were attributable to commercial, land-based wind turbines. Poachers, transmission lines, pesticides and lead poisoning from bullet-ridden carrion killed significantly more.

Prosecution as the Last Resort

Wind opponents also allege that the Obama Administration is playing favorites, treating the wind industry with kid gloves when it comes to bird deaths while aggressively prosecuting the oil and gas industry for similar infractions.

Until last November, however, no administration had ever prosecuted a wind company under the two main federal bird protection laws, the Migratory Bird Treaty Act (MBTA) and the Bald and Golden Eagle Protection Act. That’s when the Justice Department reached a settlement with Duke Energy, which pleaded guilty to killing 14 eagles and 149 other birds at two Wyoming wind farms. And more prosecutions may be in the wings. FWS is currently investigating 17 wind industry-related bird death cases and has referred six of them to the Justice Department.

According to FWS, prosecution under the two laws is always the last resort, regardless of the industry or technology in question. The agency tries to work with violators to fix the problem before it refers a case to federal prosecutors. For example, FWS inspectors routinely check for bird carcasses in oil and gas company waste pits. When they discover dead birds, they notify the responsible company and give it the opportunity to rectify the problem by installing netting. If the company pays a modest fine and corrects the problem, FWS will not file a case. That happens only after repeated violations, and even if a company is ultimately convicted and placed on probation, the fine is relatively small.

In 2011, FWS filed criminal charges against three companies drilling in North Dakota’s Bakken shale formation. One of those companies, Continental Resources, was indicted for killing a single bird in one of its waste pits. Wind opponents routinely cite this case when alleging the Obama Administration is treating the oil and gas industry unfairly. But they don’t mention that Continental Resources and the two other companies had been killing birds for years. The Justice Department charged them with violations based on the number of dead birds FWS agents found when they made their last site visit following years of imploring the companies to install nets. Wind opponents also don’t mention that a district court dismissed the charges, issuing a ruling that squarely conflicts with how the government has traditionally interpreted the MBTA.

Wind critics likewise overlook the fact that the federal government and the wind industry have taken steps to mitigate the threat turbines pose to birds. In 2008, a number of leading wind developers joined with conservation and science groups, including the Union of Concerned Scientists, to launch the American Wind Wildlife Institute to promote wind development and protect wildlife at the same time. Four years later, FWS issued new voluntary guidelines covering siting, construction and other key issues for wind developers to minimize harm to birds and their habitats.

Meanwhile, a number of remediation efforts are underway. As part of a settlement with the California state government and environmental groups, for example, the largest wind power company in the Altamont Pass is replacing thousands of outdated turbines with a lot fewer, taller, more-efficient ones that pose less of a threat to the golden eagles, hawks and other birds that patrol the skies in the area. So far those efforts and other modifications appear to be producing results.

So if wind opponents were really concerned about the welfare of birds, they would be calling for more wind farms and other carbon-free energy sources to replace coal, oil and natural gas. In other words, their argument against wind is strictly for the birds.