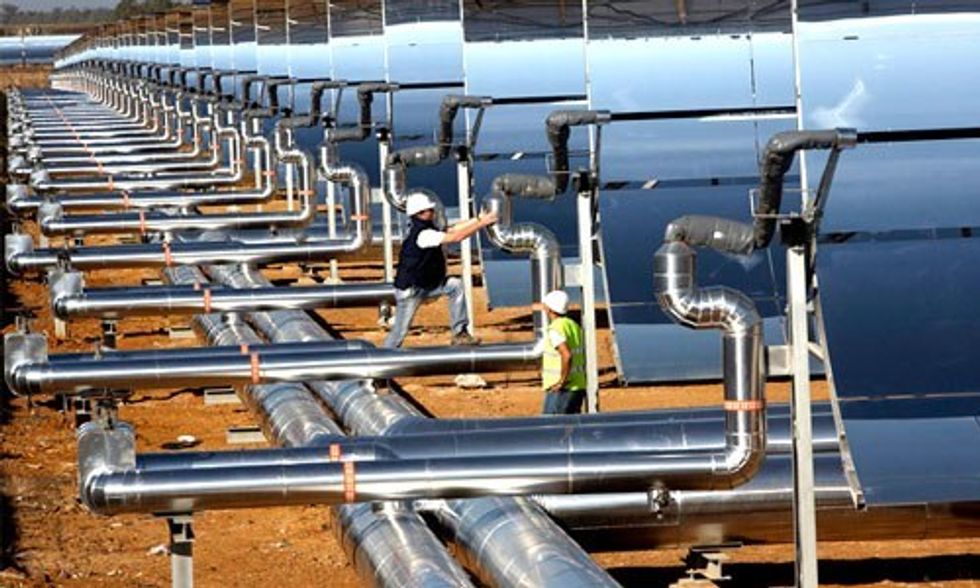 It probably surprises nobody to learn that coal produces more of the world’s electricity than any other fuel. But it may provide food for thought to realize that the second most widely-used fuels for power generation are now renewables.

In Europe, the main renewables used to generate electricity are wind and solar power. Since 1990, global solar photovoltaic power has been increasing at an average growth rate of 44.6 percent a year and wind at 27.1 percent.

The IEA reports that electricity production last year in the 34 members of the Organization for Economic Co-operation and Development (OECD) fell slightly to 10,712 TWh (terawatt hours)—a decrease of 0.8 percent (86 TWh) compared with 2013. To put that in context, 1 TWh is 1 billion kilowatt hours and each KWh takes about 0.36 kilograms of coal to generate.

This decline, the agency says, was driven by lower fossil fuel and hydro production, which were only partially offset by increases in non-hydro renewables. These grew by 8.5 percent and nuclear energy by 0.9 percent.

In 2014, solar photovoltaic power overtook solid biofuels—used in power plants that burn biomass—to become the second-largest source of non-hydro renewable electricity in OECD countries of Europe, with a share of 17.3 percent.

Electricity generation is leveling off within the OECD, while it is rising strongly in the rest of the world. In 2011, non-OECD countries for the first time produced more electricity than members of the OECD.

In the same year, electricity generated by coal reached its highest level yet at 9,613 TWh, representing 41.1 percent of global electricity production. The growth in coal generation was driven by non-OECD countries.

Globally, more renewable energy is consumed in the residential, commercial and public services sectors than elsewhere, but there are two distinct patterns of use.

The IEA’s data will encourage renewable energy’s supporters, but they also show how much the world continues to rely on fossil fuels for its electricity.

In 1971, coal produced about 2 TWh of global electrical power, but that figure is now almost five times higher. Replacing that much generation with clean fuels will be a huge challenge, despite the very rapidly accelerating growth of renewables.

Fatih Birol, the IEA’s director, has said that, without clear direction from the UN climate summit to be held in Paris in December, "the world is set for warming well beyond the 2°C goal,"—the internationally-agreed limit for global temperature rise that is intended to prevent climate change reaching dangerous levels.

This scenario, it said, "puts the world on a path consistent with a long-term global average temperature increase of 3.6°C."