'World's Most Sustainable City' to Run on 100% Solar 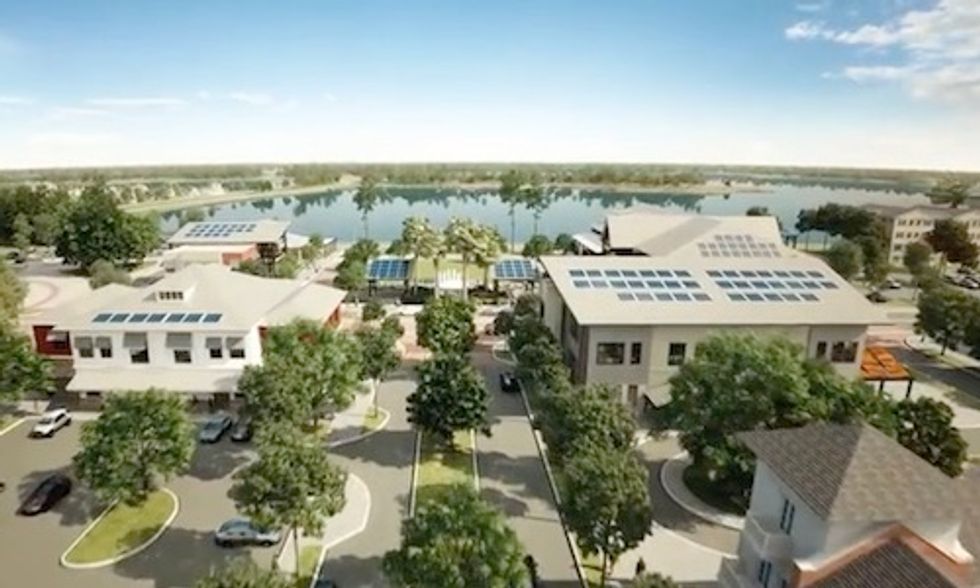 Babcock Ranch, an eco-friendly community under development in southwest Florida near Fort Myers, might just be the town of the future.

A rendering of Babcock Ranch, aka "the world's most sustainable city," will operate mainly on solar power.

“Less than a year from today, the first residents will be settling into a whole new way of life—one that is conscientious, engaging and connected," said Syd Kitson, the CEO of the development company Kitson & Partners, who has been working on this ambitious plan since 2006.

The project was approved as part of a public-private partnership strategy with the State of Florida and local governments. According to The Real Deal, Kitson & Partners initially bought the $500,000 million 91,000-acre ranch in Lee County from the Babcock family in 2006 and then sold 73,000 acres to the state as a natural preserve.

The remaining 18,000 acres—roughly the size of Manhattan—have been designated for the Babcock Ranch development.

Kitson & Partners have stated that their goal is to turn Babcock Ranch into the "world's most sustainable city" and to become the "first solar-powered city in the United States."

New residents will be settling into Babcock Ranch in 2017, the developers say.

The eco-town will receive its power from a 74.5-megawatt solar power plant operated by local electric utility Florida Power & Light.

“We'll always be producing more solar energy than energy we are actually using, and we're very proud of that. And when it's not solar power, it's going to be natural gas, which might be the cleanest mix you can find in the country," Kitson told ThinkProgress.

The aim is for Babcock Ranch to consume less power than the solar facility will produce so it won't need to switch to natural gas. The homes and buildings in the community are also designed to accommodate rooftop solar systems if the owner wants to increase capacity.

Besides running on sunshine, the town also wants to get rid of driving by implementing an advanced, driverless transportation system that's run by an Uber-like app, Fast Company reported.

Babcock Ranch residents will be able to get from their homes to downtown or their offices with their two feet, a bike, public transit or a ride-share to go out and about in Babcock Ranch or to nearby towns—"anything but drive their own car," as Kitson says in the video below.

Jennifer Languell, of Trifecta Construction who is working with Kitson & Partners, explained that she's designing the town to accommodate electric and autonomous vehicles.

“There are 15 new electric vehicles coming out this year. We are making sure when we are putting in the roadways that we have the infrastructure to put in those car chargers," she told New-Press.

Her firm is also planning on a Discovery Center, restaurants, wellness center, market cafe, schools and even a doggie daycare.

Despite being a high-tech community, residents will also have plenty of access to nature. Half of Babcock Ranch's total footprint is devoted to parks, lakes and an active trail system of more than 50 miles of preserved and restored ecosystems, the developers hoping residents will want to explore.

Kitson told ThinkProgress that there will be a variety of housing options for those interested in moving to the community, from condos to expansive homes, with prices ranging from $200,000s to $900,000.

Kitson & Partners said that Phase 1 of development will be completed in 2017 and will have a total of 1,100 residences. The initial downtown district buildings will feature a state of the art wellness center, a market café, lakeside restaurant, educational facilities and an outdoor outfitter.

"When the town is completed, it will comprise 19,500 residences, an engaging downtown and a total of 6 million square feet of commercial and community space," the company said. "Ultimately, approximately 50,000 residents will call Babcock Ranch home."