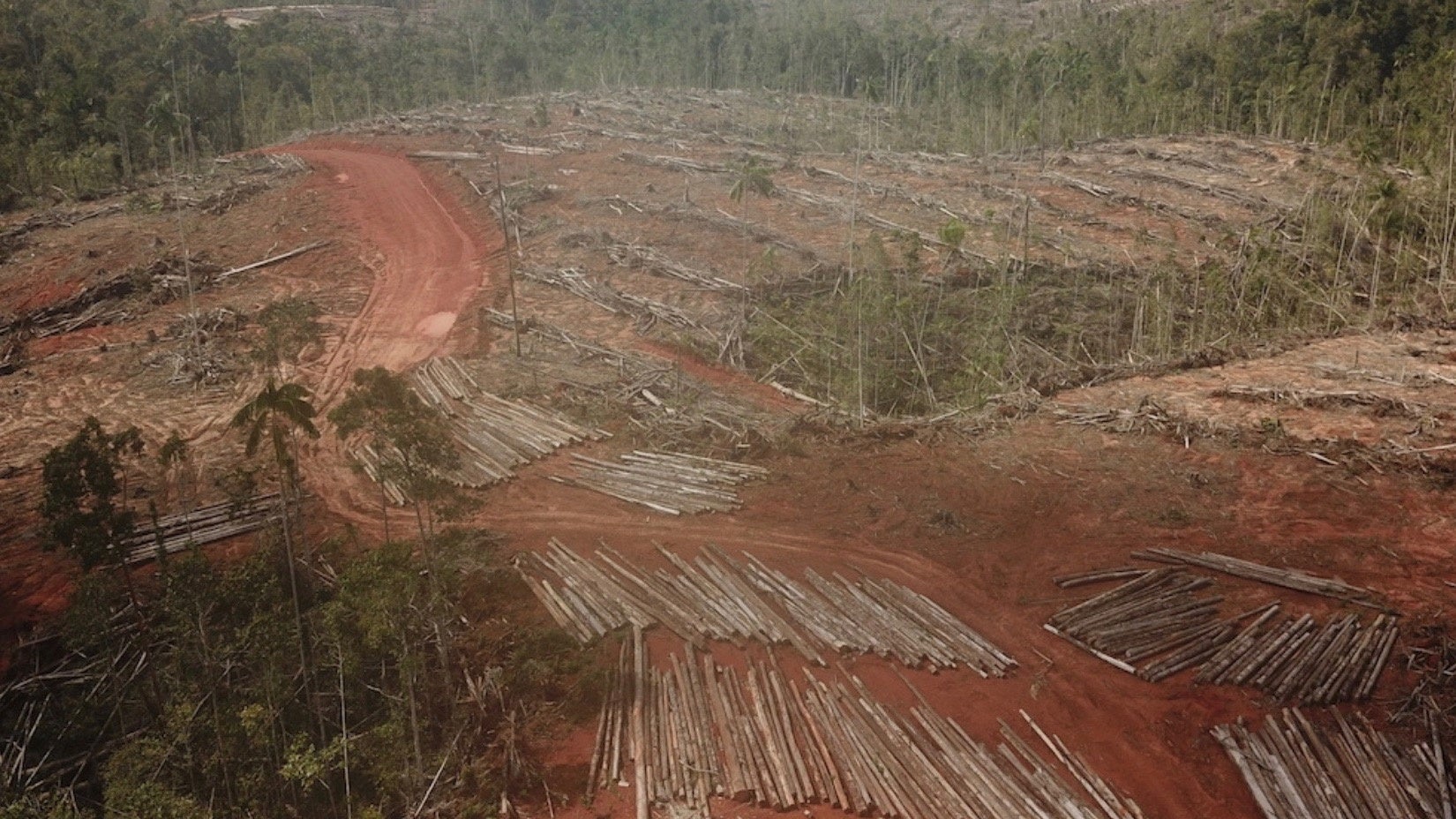 A new company has begun clearing rainforest in an area of Indonesia’s easternmost Papua province earmarked to become the world’s largest oil palm plantation, in a vast project that has been mired in allegations of lawbreaking.

If seen through to completion, the Tanah Merah project will generate an estimated $6 billion in timber and create a plantation almost twice the size of London, at the heart of the largest tract of intact rainforest left in Asia. It will also release an immense amount of carbon dioxide into the atmosphere, at a time when Indonesia has committed to reducing emissions from deforestation.

Since March of last year, the Digoel Agri Group, founded by a politically connected Jakarta family and now backed by an investor from New Zealand, has bulldozed 170 hectares (420 acres) of rainforest in a section of the project previously spared from land clearing, satellite imagery shows.

The clearance amounts to a fraction of the 280,000 hectares (692,000 acres) allocated for the project, now controlled by several different conglomerates. But it signals that deforestation could quickly accelerate after a decade of false starts by other investors. 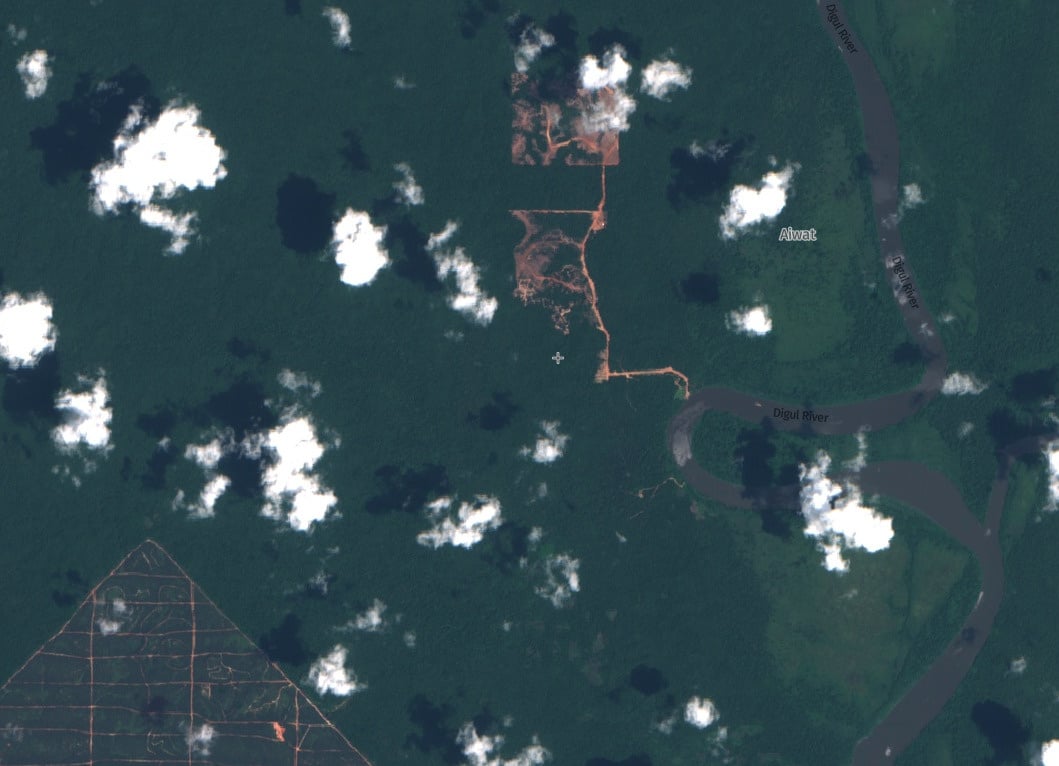 Since it was first conceived in 2007, the rights to the project have changed hands several times, involving a string of investors who have deployed crude and complex corporate secrecy techniques to hide their identities.

The licensing process for the project has been plagued by irregularities. A cross-border investigation by The Gecko Project, Mongabay, Malaysiakini and Tempo, published in November 2018, revealed that key permits were signed by an elected official who was simultaneously serving a prison sentence for embezzling state funds.

A subsequent report found that officials believe other essential permits — for both the plantation and a giant sawmill to process the timber — were falsified.

Two companies, majority-owned by anonymous firms registered in the United Arab Emirates, began operating on the basis of these permits, to the north of the land now held by Digoel Agri. In response to written questions from The Gecko Project and Mongabay they have denied the allegation that the permits were falsified.

On paper, Digoel Agri’s involvement in the project represents a clean break from those allegations. The firm arrived on the scene after the suspect permits held by earlier investors were revoked and reassigned to it.

Jackson Iqbal de Hesselle, 32, a member of the Rumangkang family, which is behind Digoel Agri, said its operations were clean. “We’re obeying the rules,” he said in a recent interview at the firm’s office in Jayapura, the capital of Papua province.

However, while there are no apparent links between Digoel Agri and the previous investors, its ability to operate is partly predicated on the allegedly compromised licensing process that went before.

The legal basis of Digoel Agri’s activities rests partly on decrees rezoning the land to allow development, issued by the Ministry of Forestry in 2012, following requests from earlier investors. The applications were based on the plantation permits that were allegedly falsified.

As of late last year, Indonesian authorities had yet to investigate the allegations, officials from several agencies said at the time.

NGOs scrutinizing the project assert that officials rushed into reallocating the lands to new investors without properly considering the allegations of irregularities in the licensing process and the environmental and social impacts the project would have.

Arie Rompas, the head of forest campaigns at Greenpeace Indonesia, called the Tanah Merah project a “public scandal” and said the permits underlying it should be examined and revoked.

“There is still an opportunity to save this area,” he said.

Digoel Agri was set up by members of the Rumangkang family, according to the Indonesian government’s corporate registry. The late family patriarch, Ventje Rumangkang, who died in February at the age of 74, was a founder of Indonesia’s Democratic Party, the vehicle for Susilo Bambang Yudhoyono’s successful presidential run in 2004.

At their office in Jayapura, Jackson and his brother Jones Rumangkang, 44, said they had decided to invest in the Tanah Merah project after being encouraged to do so by bureaucrats in Boven Digoel, the district in which the project is located. They then formed several companies under the Digoel Agri brand and set about acquiring the permits.

The brothers said they were helped along by Fabianus Senfahagi, the head of a local indigenous people’s association. He had played a role shepherding through the project in its early stages, accompanying surveyors sent by other investors around 2012.

A paper trail of correspondence among Fabianus and government officials shows he subsequently agitated for the permits to be revoked and reassigned to the Digoel Agri Group. 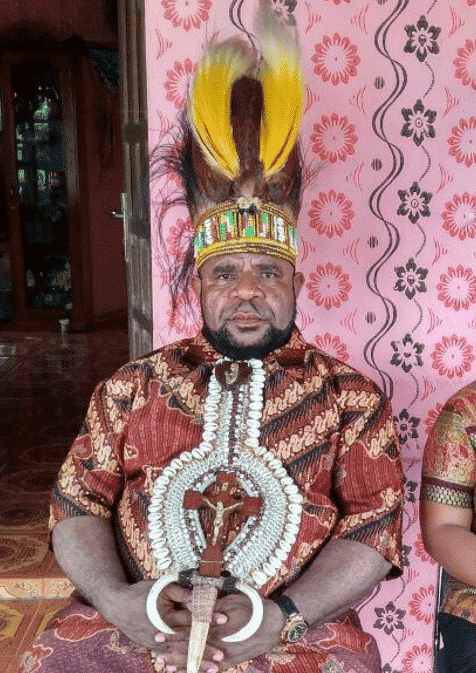 His letters to the district government in 2014 claimed the local Auyu people were anxiously waiting for the project to begin. By this time, the land concessions that would be transferred to the Rumangkangs were majority-owned by Tadmax Resources, a Malaysian logging and property conglomerate. Minority stakes were retained by the Menara Group, an enigmatic Jakarta firm that brought the project to life in 2010.

Over the next three years, the permits held by Tadmax and Menara were revoked by the district and provincial governments. The stated rationale for cancelling them was the companies’ failure to begin operating. However, bureaucrats at the Papua investment agency had also raised concerns that some of the permits had been falsified.

Tadmax and Menara have not responded to repeated requests to comment on these allegations.

By 2017, the concessions previously held by Tadmax and Menara had been reallocated to the Digoel Agri Group.

In early 2019, Tadmax and Menara challenged this decision. A letter to the central government from Dr. Sadino & Partners, a law firm representing the joint investors, accused officials of illegally revoking the permits. They also argued that anyone using the same land on the basis of new permits — like the ones underlying Digoel Agri’s operations — was committing a crime.

Jones and Jackson insisted that Digoel Agri was in compliance with the law and had obtained the permits it needed to begin operating, from the district and provincial governments.

Ordinarily, to convert rainforest to a plantation, Digoel Agri would also have needed to apply to the forestry ministry in Jakarta to rezone the land for development. But by the time the Rumangkangs arrived in Papua, this process had already taken place.

The Menara Group and its co-investors had obtained decrees rezoning the land from the then-minister in 2011. These decrees were issued on the basis of permits that provincial government officials have repeatedly reported were falsified.

In an interview last year, Sigit Hardwinarto, the ministry’s director-general of forest planning, said the rezoning could be reviewed if the allegation that the permits had been falsified was reported to his department.

The rezoning of the land is a legacy of the administration of President Yudhoyono and then-Forestry Minister Zulkifli Hasan. During his tenure, Zulkifli reportedly rezoned 2.4 million hectares (5.9 million acres) of land for conversion to oil palm plantations.

Yudhoyono’s successor, President Joko Widodo, and the new forestry minister, Siti Nurbaya Bakar, have sought to strike a different path. In 2018, Widodo signed a three-year moratorium on the issuance of new licenses for oil palm plantations.

The policy had been announced in the wake of Indonesia’s 2015 fire and haze crisis, in which Indonesia’s vast peat swamps burned as a result of agricultural fires from the oil palm and timber plantation industries. Toxic smoke from the fires drifted into neighboring countries, creating a public health crisis.

The moratorium explicitly barred the forestry ministry from rezoning land for oil palm development. It also instructed the cabinet to review all existing oil palm permits with an eye toward possibly revoking them. Several weeks after the president first declared he would sign the moratorium, in 2016, Siti singled out the Tanah Merah project as one that merited scrutiny.

In comments posted on her personal website, Siti referred disparagingly to the fact that the project appeared to have been established so the licenses could be “traded” to Malaysian investors, and said the president had instructed her to prioritize implementing the moratorium in Papua.

“We really have to safeguard [the forests of Papua] and must formulate and implement a development concept in Papua to the best of our ability,” she quoted Widodo as telling her.

However, neither these policies nor the allegations around the Tanah Merah project have stymied its progress under the direction of new investors. NGOs monitoring the implementation of the moratorium have noted limited progress in Papua.

“There has been no significant progress in how this policy is implemented,” said Arie, the Greenpeace campaigner. “The Tanah Merah project should be a strong case to see how this [policy] can be carried out seriously and effectively.” 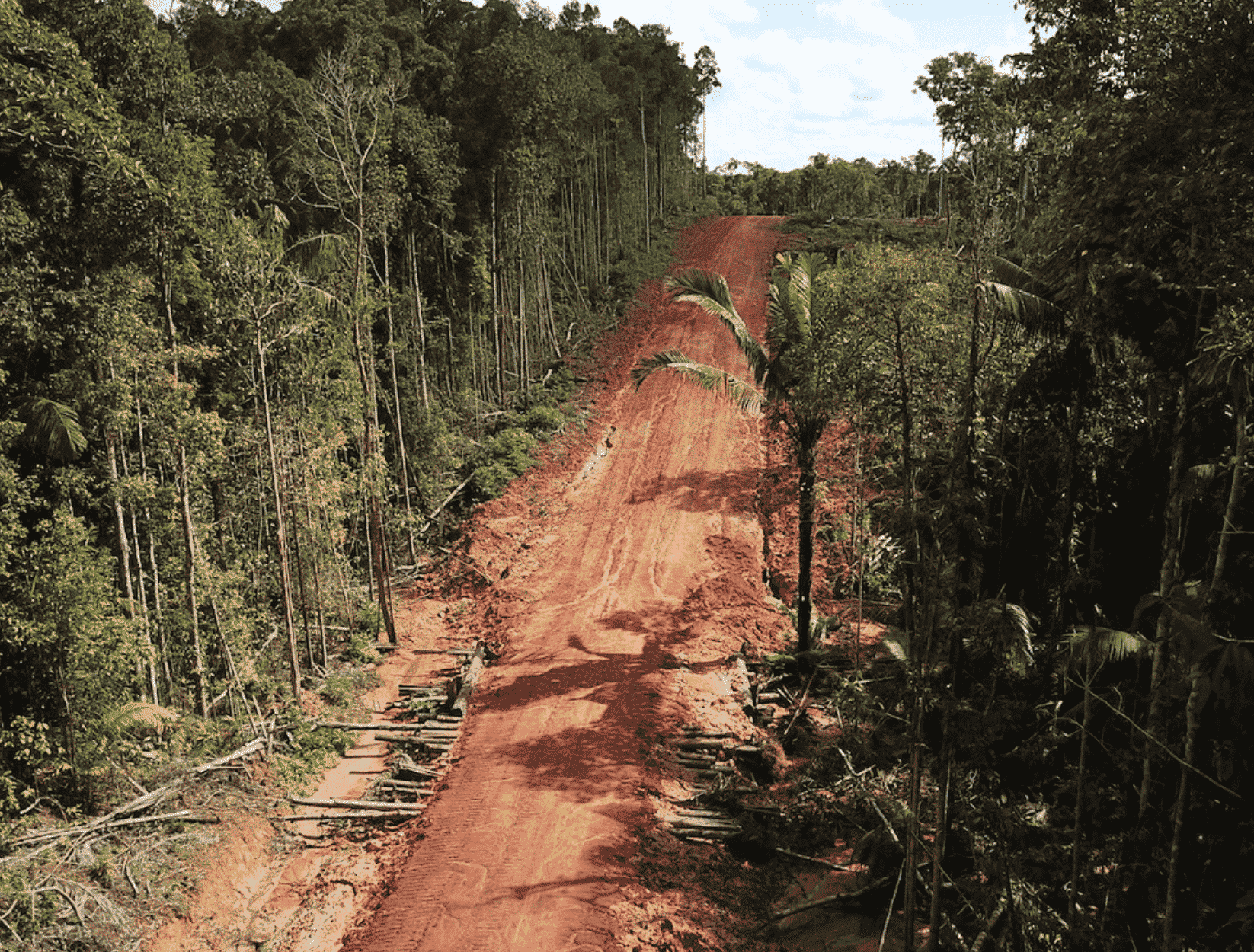 A road cuts through one of the Digoel Agri land concessions, seen in January. Pusaka

The Rumangkangs insist that the project will benefit the Auyu people. Jones said the ones he met were overjoyed about the prospect of a plantation on their land.

“They didn’t just ask, they cried,” he said. “The Auyu tribe is the poorest in Boven Digoel, even though they’re so rich [in natural resources].”

The Rumangkangs have enlisted foreign investors to help them develop the plantation. Their chief partner is a New Zealand property developer named Neville Mahon. In 2018, Mahon became the majority shareholder of the Digoel Agri subsidiaries with land concessions in the project. He could not be reached for comment.

Mahon associate Thirunavukarasu Selva Nithan, an Australian national, is the sole director of the three companies, corporate records show. Contacted by email, he said he had resigned his position and directed questions to Jackson.

The involvement of these investors adds to a growing list of actors from across the world with a stake in what could become the world’s largest stretch of oil palm. Malaysian logging giant Shin Yang has constructed a sawmill to process timber from the project.

North of the Digoel Agri concessions, investors whose identities are hidden behind anonymously owned companies in the United Arab Emirates have also begun clearing land, with the Menara Group and the sister of a prominent politician from Indonesia’s National Mandate Party as their minor partners. So far, they’ve bulldozed 8,300 hectares (20,500 acres) of forest, nearly 3% of the project’s total area.

Yet another firm holds the rights to the northernmost block of the project. Corporate records show it is majority owned by two holding companies registered to a letterbox address in Malaysia. The minor shareholder in that venture is the Malaysian logging giant Rimbunan Hijau.

Many Auyu remain steadfastly opposed to the Tanah Merah project, according to Franky Samperante, the director of Pusaka, an Indonesian nonprofit that advocates for indigenous peoples’ rights. 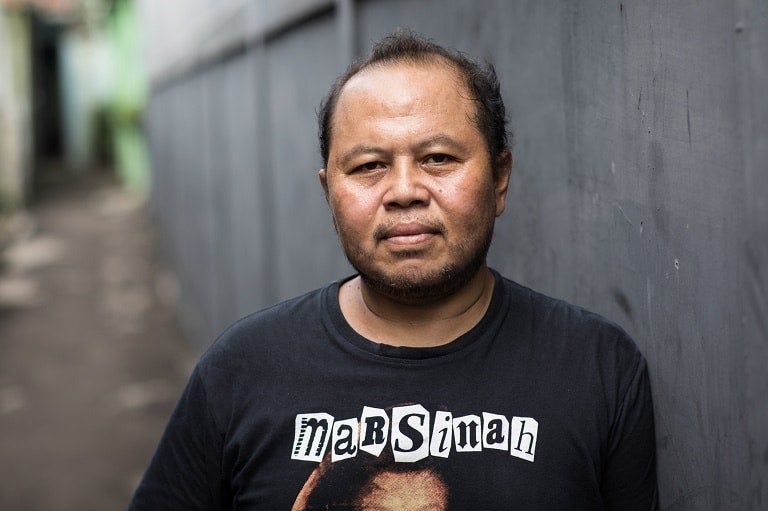 On a recent trip to the area, he found that members of the Kemon clan, whose land has been targeted by Digoel Agri, did not want the plantation to go ahead on the grounds that it would destroy their food and water supplies.

He questioned the government’s decision to allow the plantation to move ahead, without investigating the allegation that permits held by the earlier investors had been falsified.

“In light of the irregularities that have arisen, the Ministry of Environment and Forestry must review the decrees rezoning the land,” he said. “The government must impose sanctions on the perpetrators.”