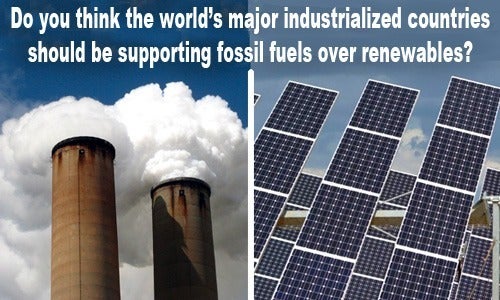 The governments of the world’s major industrialized countries, the G20 group, are providing more than US$450 billion a year to support the production of fossil fuels.

That is almost four times the entire world’s subsidies to the rapidly growing renewable energy sector, as the International Energy Agency (IEA) estimates total global renewables subsidies in 2013 at $121bn.

The G20 group agreed in 2009 to phase out fossil fuel subsidies “in the medium term,” a pledge that was repeated at its 2014 meeting in Brisbane. 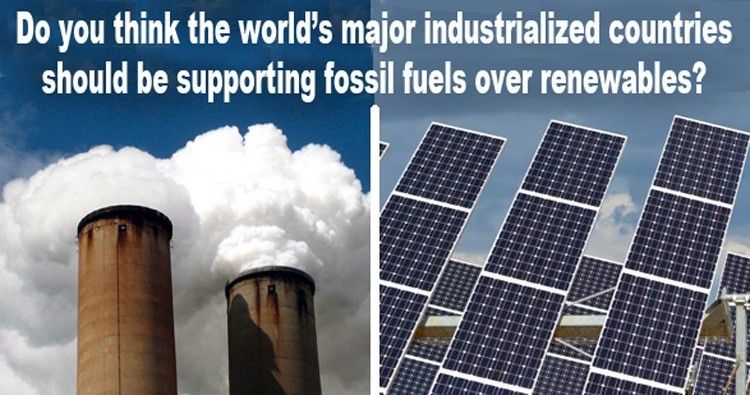 The report singles out the UK for particular criticism, saying it “stands out as the only G7 nation significantly ramping up its support for the fossil fuel industry, with even more tax breaks and industry support handed out to companies operating in the North Sea in 2015.”

A similar report by the two groups a year ago said G20 subsidies for fossil fuel exploration alone amounted to an estimated $88bn annually.

The G20’s continued support for fuels—whose use increases greenhouse gas emissions and increases the risk of irreversible and catastrophic climate change—ignores the global imperatives to keep most current fossil fuel reserves in the ground.

It also disregards the faltering economic returns from coal and from oil and gas reserves, which are increasingly difficult to exploit.

The Intergovernmental Panel on Climate Change says at least three-quarters of proven reserves of oil, gas and coal must stay in the ground in order for the planet to have a two-in-three chance of remaining below the internationally-agreed 2C climate change threshold.

There is continuing scientific debate over how much of the world’s fossil fuels should remain unexploited, with many estimates ranging from a fifth to a third. The UN climate change conference in Paris, starting on Nov. 30, is likely to see a keen debate on the issue.

The ODI/OCI report, published before the G20 summit in the Turkish city of Antalya, examines three types of G20 government support in 2013 and 2014—the most recent years with comparable data.

It looks at national subsidies extended through direct spending and tax breaks; investment by state-owned enterprises, both domestically and internationally; and public finance extended through, for example, loans from government-owned banks and financial institutions.

Japan provided more public finance for fossil fuel production in 2013 and 2014 than any other G20 country, averaging $19bn per year—$2.8bn of that for coal alone. The U.S. provided more than $20bn in national subsidies, despite calls from President Obama to scrap support to fossil fuels.

Turkey, this year’s G20 host, is giving tax breaks to support its program of building more coal plants than any other OECD country, potentially raising its own greenhouse gas emissions by 94 percent over the next 15 years.

At the end of September, the U.S. and China agreed to give priority to the establishment of a firm deadline for the phase-out of fossil fuel subsidies as a key task during China’s G20 presidency in 2016.