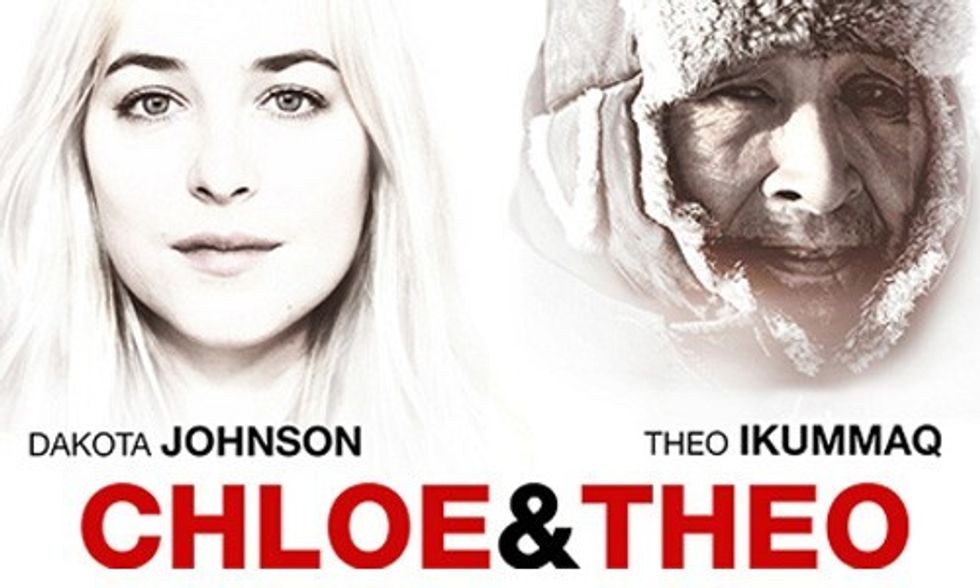 Connect4Climate hosted the world premiere of Chloe & Theo Wednesday night, a film demonstrating how storytelling motivates people to do extraordinary things. In the film, a homeless girl (Dakota Johnson star of 50 Shades of Grey) befriends an Inuit, who has traveled to New York City from his tiny Arctic hometown with a big message for world leaders: "My world is melting. Please help us."

Prior to the screening in the Preston Auditorium at the World Bank Headquarters in Washington, DC, an esteemed panel—including film producer Monica Ord, founder and president of Prospero Pictures Martin Katz, director of social responsibility at MTV International Julie Allen and moderator Joe Wagner from Fenton Communications—discussed the power of film and how it can truly transform society.

"Film can change people's lives and have far reaching effects on how we live," said Wagner prior to introducing the panel.

He first introduced Ord, an entrepreneur focused on critical global social and health issues, who explained that she heard Theo’s true story from a friend, who challenged her to do something about it, so she did.

Ord told the crowd of more than 200 people that Theo told her friend "a passionate story of what was happening to his people" and that "he wanted someone to come up with a famous person that could go to the Arctic and maybe bring some awareness."

Ord called Theo and asked him what she could do and he asked her to get someone to help him. So she called Richard Branson and "he cleared his entire schedule and a month later we were all in the Arctic traveling by dog sled."

Ord confessed that she had no knowledge of climate change or filmmaking, but was committed to getting this project done.

Monica Ord: "People need to feel what the people on the frontline of #climatechange are facing" #TakeOn pic.twitter.com/W4FpwMvONg

Wagner then asked Katz, producer of the award-winning, historical film Hotel Rwanda, to talk about "what is the essence of film that enables one to create these connections and render such powerful responses and can this be applied to the subject of climate change?" Read page 1

"You need the big story that comes from films. Then you need to give tools to people to make them able to make a change"@martinfkatz #TakeOn — Connect4Climate (@Connect4Climate) April 15, 2015

Wagner next asked Allen about MTV's audience and wondered if she feels that she has "more of a chance to impact young minds and render change or is it the other way around?"

"I feel it's MTV's responsibility as a global media company to bring issues like climate change and other issues that affect young people all over the world to the forefront," Allen responded. "We play a very important role in raising awareness of these issues. But, it's very important that we do it that's appealable to the mainstream."

"We find the best way to relate to them is by producing entertaining, informative, sometime funny content that they are going to relate to and weaving messaging into that programming."

.@julie_a @MTV "It's important to do productions that are entertaining, informative content that raise awareness among young people" #TakeOn

Sir Richard Branson and John Paul DeJoria are executive producers of the film, which is scheduled for release in August.

I had the chance to interview Ord after the screening and I asked her what she hopes people will get out of her film. "If people will just step up and do what they can ... they can truly make a difference. They just have to go for it," she replied.

The film is a must-see that will capture your attention and pull at your heartstrings. You'll want to encourage everyone you know to see it and hopefully it will motivate you to step up and truly make a difference.

For a glimpse of the film, watch the trailer below where you get to meet Chloe, a young woman who has been searching for something to believe in. She comes face to face with an Inuit Eskimo named Theo, who was sent by his elders to send a message to humankind. Chloe and Theo inspire each other and through the help of a kind lawyer named Monica (starring Mira Sorvino), they are able to help Theo tell his story in an attempt to help his people and all of humankind.