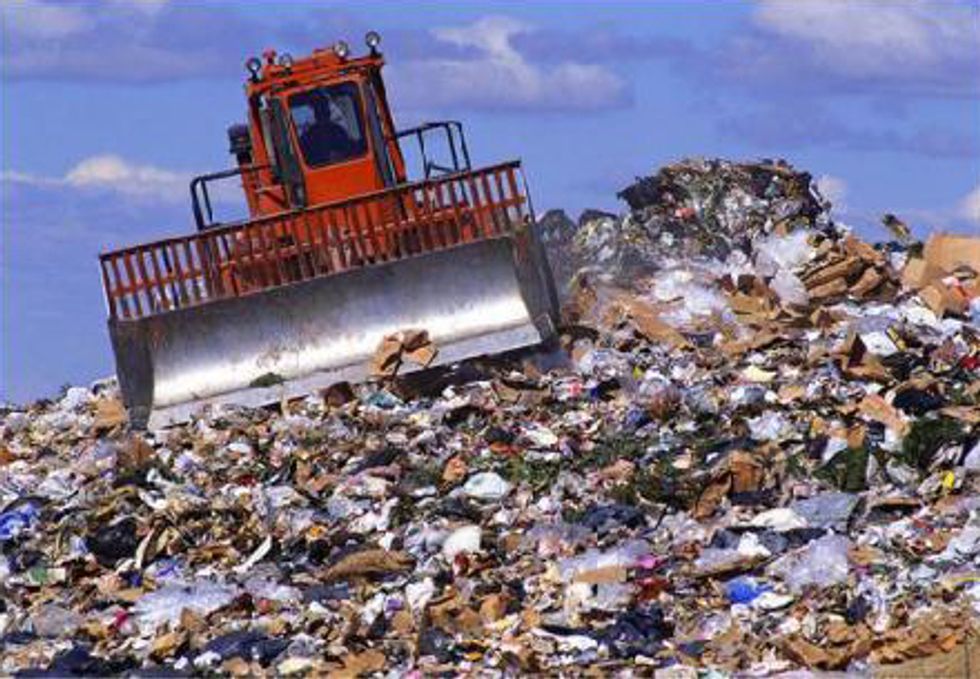 Don't turn Ohio's landfills into a dumping ground for radioactive waste from the oil and gas industry.

That's the message environmental groups hope will resonate with state lawmakers as they consider whether to approve a controversial proposal by the Ohio Department of Natural Resources (ODNR) to allow the disposal in Ohio landfills of radioactive-laced drill cuttings from deep-shale oil and gas drilling in Ohio and nearby states.

"If passed, this proposed law would put a big, trashed-out 'Statue of Radioactive Liberty' on Ohio's eastern border. It would proclaim to the oil and gas industry, 'Bring us your spent, cast-off, radioactive waste. It's welcome in Ohio,'" said Jack Shaner, deputy director of the Ohio Environmental Council.

Under the ODNR proposal, drill cuttings and brine could be classified by the state as naturally occurring radioactive materials, or NORM. Such materials would not be required to be tested for radioactivity and could remain on site at a horizontal-drilling well pad or could be shipped for disposal in any of Ohio's 39 licensed municipal solid waste landfills.

Meanwhile, waste materials classified by the state as technologically-enhanced naturally occurring radioactive materials, or TENORM—such as drilling muds—could also be disposed of in a solid waste landfill if it contains less than five pico curries per gram of radioactive content.

Even more concerning, if the material tests high, over the five pico curries threshold, it could be mixed or "down blended" with soil, sawdust, automobile salvage yard "fluff" or other materials to dilute the radioactive content for disposal.

"If the shale gas wastes are 'properly' disposed of, they are going to swamp the handful of existing, federally-approved low-level radioactive waste disposal facilities. This is why the industry and supporting politicians are dodging that classification as quickly as they can" said Dr. Julie Weatherington-Rice, scientific advisor to the Ohio Environmental Council.

Drill cuttings are the broken bits of solid material removed from the borehole of an oil and gas well left over after drilling through rock and soil. Naturally occurring radioactive materials, especially radium and uranium, occur in the same horizontal zone of shale rock that contains oil and gas deposits. Horizontal drilling for shale-gas and oil is underway in the Marcellus and Utica shale rock formations that lie beneath parts of Michigan, New York, Ohio, Pennsylvania and West Virginia.

The provision was included in the new state operating budget proposed by Gov. John Kasich's administration earlier this year. The Ohio House of Representatives removed the proposal when it passed its version of the bill last month. House leaders said the provision should be considered in a separate, "stand-alone" bill to allow more time for study and debate.

The Ohio Senate soon must chose whether to accept, reject or modify the proposal as it ramps up to a June 5 vote on its version of the budget. A final compromise budget must be reached by the House and Senate and approved by Gov. Kasich by June 30.

"Radioactive waste has no place in our landfills, and it certainly has no place in a budget bill," said Jed Thorp, Conservation Program Manager of the Ohio Sierra Club. "The only way natural gas can compete with energy efficiency and renewable energy is if the industry can cheaply dispose of tons of radioactive waste."

Environmentalists warn the provision is fatally flawed because it fails to account for the basic fact that radium and uranium are highly soluble in water and eventually will leach into the landfill's water collection system and trucked to a municipal wastewater treatment plant.

They also contend the amendment would undermine the good intent of a separate law change proposed by ODNR to effectively prohibit the discharge to a river of fracking wastewater or "brine" from oil and gas wells that has been treated in a wastewater treatment plant. The Kasich administration has been trying to shut down such an operation in Warren, Ohio.

The environmental groups contend that, as rainwater percolates through a landfill, radioactive constituents will separate from the materials with which they have been mixed and become part of the landfill's liquid leachate material. As such, the once-diluted radioactive material will revert to its original state, exceeding the federal limit of five pico curries per gram of material.

Landfill operators typically collect the leachate and transport it to a municipal wastewater treatment plant for treatment. Because dissolved radium and uranium cannot effectively be removed from water during the wastewater treatment process, this radioactive material eventually will be discharged in "treated" water and into area rivers.

The OEC and Sierra Club also point out that:

"Lawmakers should drop this amendment like a radioactive-hot potato. At a minimum, they should put it in a separate bill so that it can get the kind of careful study and scientific inquiry that is just not practical as part of a 4,509-page budget bill debate that must be decided in the next seven weeks," said Thorp.

"Dilution is not the solution to pollution, especially when it comes to radioactive-laced trash that will continue to decay for thousands of years," said Shaner.