Why Microgreens Should Be Part of Your Daily Superfood Diet 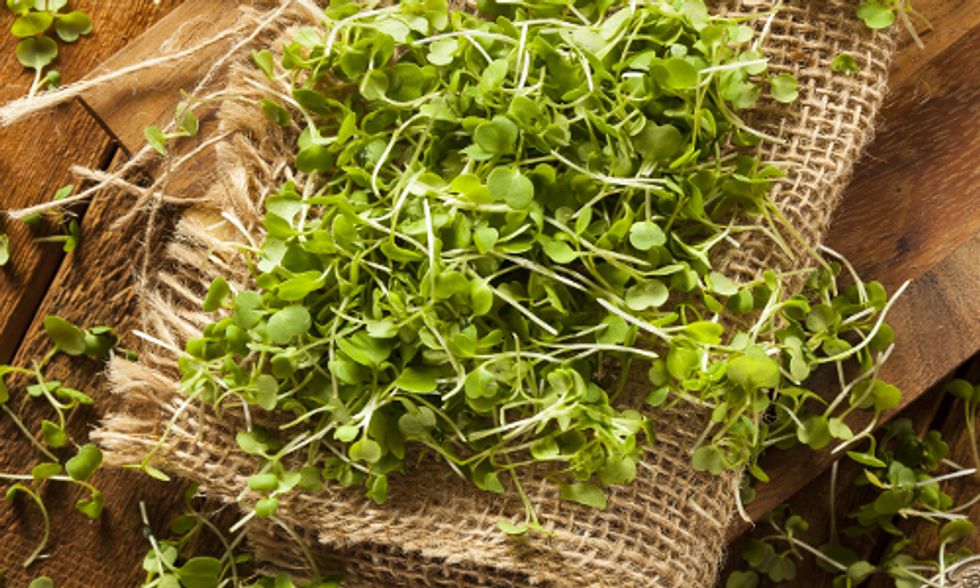 You may have dismissed the increasing prevalence of microgreens as some kind of trendy fad found mostly at fancy restaurants and upscale groceries that charge a lot for them. Don't do that! They're way more than a dainty little plate decoration or embellishment to make a salad cost more. There's a real reason to add them to your diet—and it's much easier than you think.

Microgreens: not just a trendy fad but a nutrient packed addition to your diet.
Photo credit: Shutterstock

First of all, what exactly is a "microgreen"? Think of it as the teenage version of a sprout. It's not one kind of plant, but rather, the seedling version of many different kinds, harvested when the first sets of true leaves appear or when the plant is about 1 to 3 inches tall. That's about two to three weeks depending on how fast a particular type of plant seed germinates.

Dozens of different types of vegetables can be planted to produce microgreens, with a range of tastes—mellow, spicy, tangy, earthy, nutty, crisp. Some of the most common varieties are things you may already grow to use the full plant: basil, parsley, cilantro, radishes, salad burnet, fennel, chervil, mustard, kale, collards, beets, pac choy and cabbage. Even carrots and beets can be sown and harvested as microgreens.

Because the plant is harvested before all the food contained in the seed is used to fuel the growth of a mature plant, microgreens condense the nutritional value of their older siblings. They could contain anywhere from 4 top 40 times as much of a particular nutrient, according to a study conducted by researchers at the University of Maryland and the U.S. Department of Agriculture. And many of the plants grown as microgreens are already considered superfoods, so this makes their mini-versions super-superfoods.

The researchers learned that overall microgreens tend to have higher concentrations of vitamins and carotenoids than the mature plants—many of which fall into the superfood category themselves. Because they are grown from so many types of plant seeds, what specifically they contain varies from plant to plant. Red cabbage microgreens had the greatest concentration of vitamin C—six times more than mature cabbage. It also had 40 times more vitamin E than the bigger plants. Red cabbage, garnet amaranth and green daikon radish microgreens had the highest concentrations of vitamin C, vitamin K and vitamin E. Cilantro was the winner when it came to the carotenoids lutein and beta-carotene.

"In general, microgreens contained considerably higher levels of vitamins and carotenoids—about five times greater—than their mature plant counterparts, an indication that microgreens may be worth the trouble of delivering them fresh during their short lives," said the study.

What does that mean for you? It means more of what you eat your vegetables for. Lutein, for instance, has been found to have an impact on eye health, possibly helping to stave off conditions such as macular degeneration. Beta-carotene may help protect against some cancers. And all the carotenoids are antioxidants, which play a role in maintaining and improving overall health, boosting your immune system and delaying chronic diseases of aging. If it's good to eat your vegetables, it's even better to eat your microgreens.

The best news? Forget the premium price per pound at those upscale stores. All it takes to grow your own is a shallow tray with some potting soil and seeds. You can find seeds intended for growing microgreens for sale at garden centers or through seed catalogs. Many sell seed mixes of complementary flavor, which also provide a mix of different nutrients. But you don't need to buy special seeds. Anything you have on hand can produce microgreens.

Sow the seed heavily and keep lightly watered at all times. Store-bought microgreens have a very short shelf life, so growing your own and cutting them as you need them assures you'll always have the freshest, crispest ones to enhance a salad or a sandwich or sprinkle on top a tart, a pot pie, a pizza or even a cup of soup as the finishing touch before serving. Happy eating!

How to Create Your Indoor Edible Garden