Why Mars as a Backup Planet Isn't a Good Idea 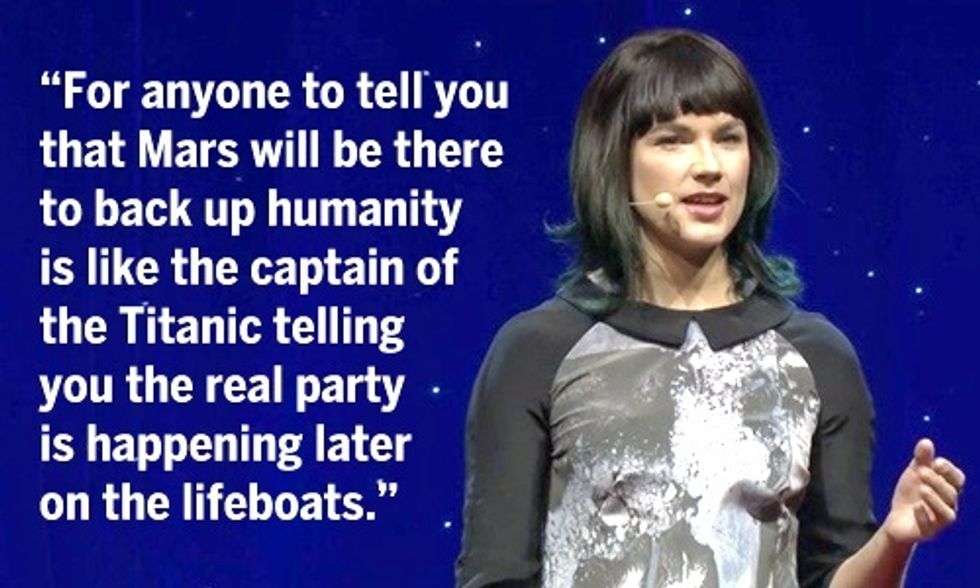 You've probably heard the rallying cry: "There is no planet B." But maybe you are thinking Mars could make a nice new home if Earth becomes uninhabitable. If so, you should spend the next six minutes watching astronomer Lucianne Walkowicz's TED Talk.

Walkowicz, who works on NASA's Kepler mission, which has discovered thousands of potential life-supporting planets, believes "we're at a tipping point in human history." She says we're a "species poised between gaining the stars and losing the planet we call home."

She worries that “this excitement about colonizing mars and other planets carries with it a long dark shadow: the implication and belief by some that Mars will be there to save us from the self-inflicted destruction of the only truly habitable planet we know of—the Earth."

"As much as I love interplanetary exploration, I deeply disagree with this idea," she continued. “There are many excellent reasons to go to Mars, but for anyone to tell you that Mars will be there to back up humanity is like the captain of the Titanic telling you the real party is happening later on the lifeboats."

Walkowicz suggested that we stop dreaming of Mars as a place that we'll eventually move to when we've messed up Earth and to start thinking of planetary exploration and preservation of the Earth as two sides of the same goal. "The more you look for planets like Earth, the more you appreciate our own planet," she explained.