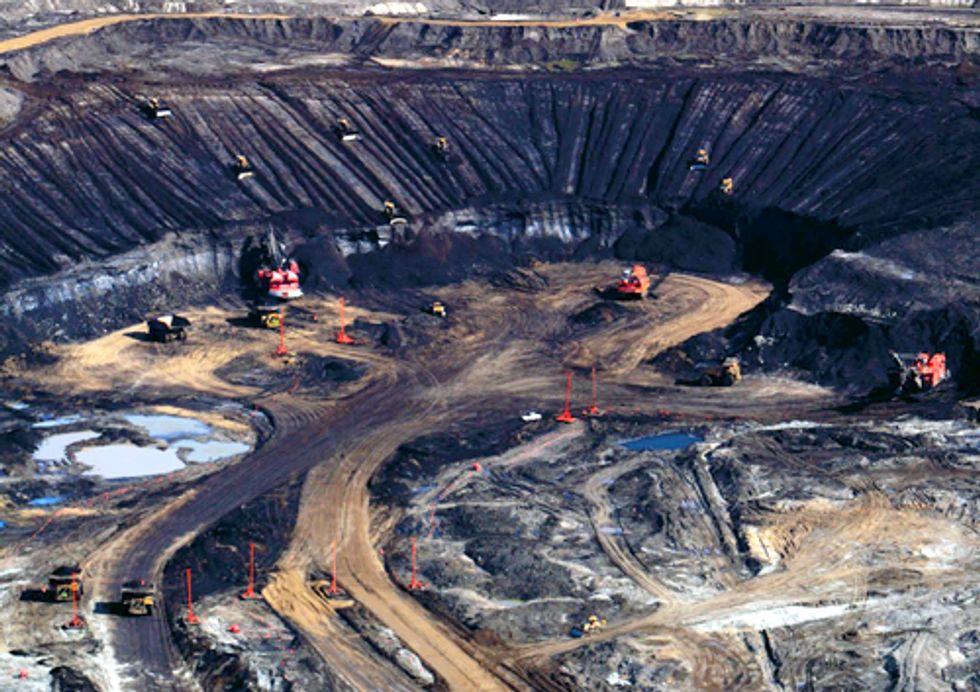 [Editor's note: Today, scientists and advocates speaking at the National Press Club in Washington unveiled new research showing that the Keystone XL tar sands pipeline would damage the climate much more than previously thought, by dramatically expanding tar sands production and because it will lead to increased combustion of a particularly dirty form of oil. Two reports were presented today, including Petroleum Coke: The Coal Hiding in the Tar Sands revealing that current analyses of the impacts of tar sands fail to account for a high-carbon byproduct of the refining process that is a major source of climate change causing carbon emissions: petroleum coke—known as petcoke, and The Climate Implications of the Proposed Keystone XL Oilsands Pipeline from the Pembina Institute—a Canadian environmental think tank—revealing how the Keystone XL tar sands pipeline would accelerate expansion of the tar sands and significantly increase greenhouse gas emissions.

Energy and Commerce Committee Ranking Member Henry A. Waxman issued the following statement on these two reports: “The new reports show that TransCanada’s Keystone XL pipeline is the key that will unlock the tar sands. If the pipeline is approved, the world will face millions more tons of carbon pollution each year for decades to come. After Hurricane Sandy, devastating drought, unprecedented wildfires and the warmest year on record in the United States, we know that climate change is happening now, we have to fight it now, and we must say no to this pollution pipeline now.”]

The Canadian tar sands have been called the “most environmentally destructive project on earth,” with good reason.

But what if we told you that a significant proportion of the climate impact from exploiting the tar sands has been overlooked?

That’s the story told in our latest report Petroleum Coke: the Coal Hiding in the Tar Sands.

On this basis alone, the European Commission has determined that the emissions from tar sands derived fuel are 23 percent greater than fuel from conventional crude used in Europe.

But tar sands bitumen is a semi-solid hydrocarbon. In fact a barrel of bitumen contains 24 percent more carbon than a barrel of conventional light oil. This additional carbon does not make its way through to the gasoline and diesel manufactured from tar sands bitumen. It is removed.

This "removed" carbon doesn’t disappear; far from it. In fact 15 to 30 percent of a barrel of tar sands bitumen is converted during the refining process into a coal-like solid fuel called petroleum coke or "petcoke." This is considered a byproduct of tar sands refining and most analysts assessing the climate impact of the tar sands have to date dismissed the emissions from burning this petcoke.

They have done this partly because they have not developed a methodology to include petcoke emissions into their calculations of the emissions from the liquid fuels. Some have recognized it’s there and have raised it as an issue for further study.

But industry analysts including IHS CERA, which has published two studies on tar sands greenhouse gas emissions entitled Getting the Numbers Right, consider the emissions from burning petcoke as “negligible.” The assumption is that petcoke simply replaces coal and therefore there is no net emissions rise.

This is a convenient but entirely misguided assumption.

So even if petcoke did simply replace coal, which is not the case, the net emissions from whichever activity the petcoke is fueling (eg: power generation) are higher.

But because petcoke is a byproduct refineries price it “to move.” It is selling into the market at around a 25 percent discount to coal.

Now we all know (don’t we?) the basic law of economics. More Supply = Lower Prices = More Demand. But growing supplies of petcoke are not only adding to the global supply of fuel for coal-fired power generators, they are undercutting coal on price.

Indeed industry analysts have shown that a typical 1 gigawatt coal plant can save around $120 million per year in fuel costs by blending petcoke with coal in their boilers. That sounds to us like a boon for coal-fired generators and a bad deal for cleaner fuels competing with coal in a tight market.

Our report reveals the following startling facts about the tar sands and petcoke.

As mentioned above, the impacts of petcoke on the local and global environment have not been considered by regulatory bodies in assessing the impacts of the tar sands.

Petcoke’s full impacts must be considered by the European Union in its debate on the Fuel Quality Directive, by the U.S. State Department in its consideration of the climate impacts of the Keystone XL pipeline, and by Canadian, American and European governments in tar sands policies across the board.

Increasing petcoke use is a clear result of the increasing production of tar sands bitumen. Petcoke is a seldom discussed yet highly important aspect of the full impacts of tar sands production. Factored into the equation, petcoke puts another strong nail in the coffin of any rational argument for the further exploitation of the tar sands.