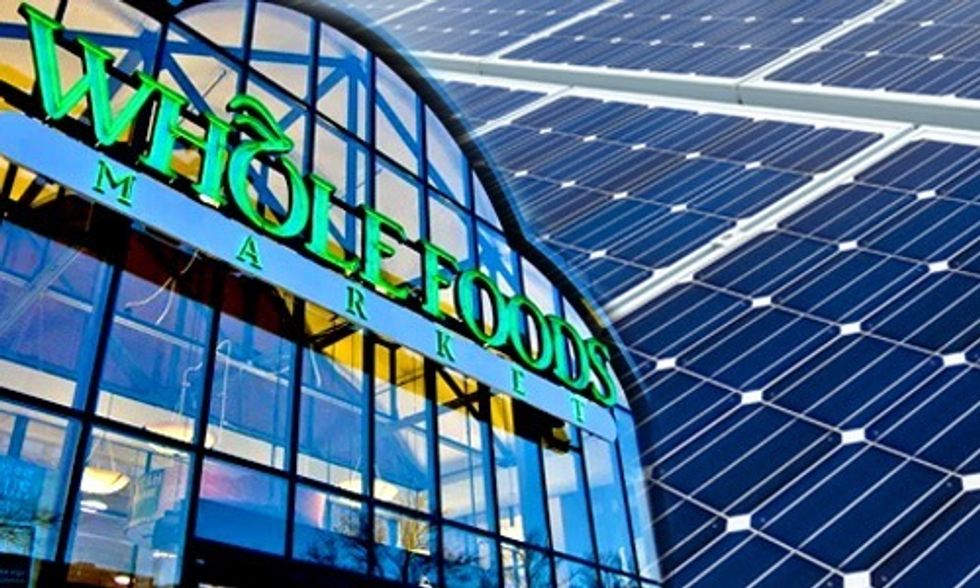 Whole Foods is teaming up with NRG Energy and SolarCity to install rooftop solar on 100 of its stores and distribution centers across the country.

Whole Foods is going even greener after striking a deal with SolarCity and NRG Energy to install solar panels across 100 stores.

Fortune reported that SolarCity, co-founded by Elon Musk, will install roughly a fourth of the supermarket chain’s 431 locations with solar panels. NRG Energy will provide panels in up to 84 of those 100 locations. News of the partnership has even bumped SolarCity's shares up 3.68 percent, the publication reported.

The upscale grocer has taken several impressive green initiatives in recent years, including green building certifications, sustainable seafood, banning plastic bags, and transitioning to compostable cutlery and food packaging. As for their renewable energy portfolio, Whole Foods was the first major retailer to offset 100 percent of their energy use with wind energy credits.

A number of stores already have solar- or wind-power installations, such as their Berkeley, California, which has the distinction of being the first major food retailer in the nation to introduce solar energy as its primary lighting power source way back in 2002. The Whole Foods in Brooklyn's Gowanus Canal has solar, wind turbines, electric vehicle charging stations, LED streetlights and a greenhouse.

"We feel that increasing support for renewable energy is a good thing for our company overall and hedging against potential rising energy costs going forward is also important," Kathy Loftus, global leader in sustainability for Whole Foods Market, told CNBC.

The new panels NRG Energy is installing onto Whole Foods rooftops' will be up to 200 times the size of NRG's typical residential arrays.

Whole Foods—known for its organic fare and, yes, high prices—has faced pressure to reduce costs due to increasing competition from other chains offering specialty and organic foods at lower prices, the New York Times reported. Going solar will also save the company money "because the solar providers can offer electricity at prices below what the stores and centers would normally pay utilities," the newspaper observed.

"SolarCity will custom design each solar power system to maximize the amount of grid power offset and expects to begin installation this spring. [Whole Foods] will also save money with the new solar installations by purchasing power from SolarCity at a discount to current electricity costs, locking in low solar energy rates for years into the future," the solar providers said in a joint press release.

The press release noted that once completed, these solar power systems are expected to place Whole Foods Market within the top 25 corporate solar users in the nation, citing data from the Solar Energy Industries Association (SEIA).

"While solar has long been viewed as an environmentally responsible energy choice, businesses now deploy solar because it is a smart fiscal choice as well," the SEIA said in its annual Solar Means Business report.

Many major American businesses have found that investing in clean, renewable energy can be good for business. According to the Rocky Mountain Institute, nearly two-thirds of Fortune 100 and nearly half of Fortune 500 companies have commitments to shift to renewables, and have purchased more than 1 GW of renewable power in the past year