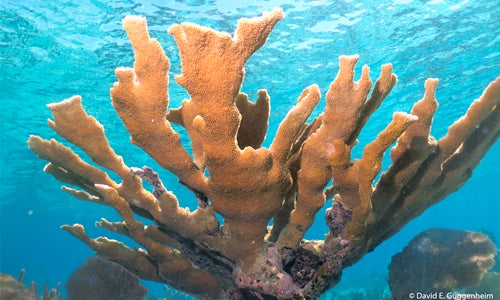 When a foreigner sets foot in Cuba, it immediately becomes clear that this magical island is profoundly unique and has developed drastically differently than any other country in Latin America and the Caribbean. And for those who venture into its verdant mountains or below its aquamarine waves, a striking revelation awaits: Just as the fifties-era Chevys and horse-drawn buggies portray an island seemingly frozen in time, so, too, do its exceptionally healthy and vibrant ecosystems illustrate that Cuba may have picked the perfect time in history not to follow the path of its neighbors. Indeed the past half century has seen a tragic and unprecedented decline in Caribbean coastal and marine ecosystems.

Elkhorn coral, one of the Caribbean’s most iconic and important species, is estimated by the National Oceanic and Atmospheric Administration (NOAA) to be 95 extinct from Caribbean waters today. But in Cuba’s Gardens of the Queen National Park—which includes Cuba’s first “no-take” marine reserve, the largest in the Caribbean—a barrier reef of healthy and magnificent elkhorn stretches across more than thirty miles as part of a barrier reef, brimming with snapper, grunt, eagle rays and sea turtles, leaving one scratching their head and wondering how in a world of corals dead and dying that such a sight is possible today.

The health of Cuba’s environment is partially an accident of history and the unique way Cuba has developed—or not developed as the case may be. The U.S. economic embargo, which was imposed on Cuba 54 years ago today, has no doubt kept millions of would-be tourists from Cuban shores and the consequent development of the resorts and golf courses that might have accommodated them. However, an important part of the story lies with the Cubans themselves who have placed strong environmental laws in place along with a comprehensive national system of protected areas. Its national commitment to protect 25 percent of its marine waters in protected areas is world-leading. In comparison, the global average is only one percent.

At a time when we reflect on the embargo, it is critical to consider what becomes of Cuba’s environmental achievements in a post-embargo world. Given the uncertainty in Cuba’s future—including a burgeoning privatization movement and the possibility of an end to the U.S. economic embargo and massive influx of tourism and business—it is important to anticipate dramatically increasing pressures on Cuba’s natural resources. A team of Cuban and American scientists believes that placing an economic value on Cuba’s natural resources will be essential to ensure the long-term protection of Cuba’s ecosystems and the “future-proofing” of its environmental laws.

Had we placed an economic value on keeping our natural ecosystems intact, there is no doubt that many decisions would have been made much differently. For example, had we adequately considered the value of the Everglades to the economy of South Florida we might not be engaged today in the largest environmental restoration project in history to try to save them.

In September 2014, Ocean Doctor and the Cuban Center for Coastal Ecosystem Research led a workshop in Cuba with representatives of the Cuban Ministry of Science, Technology and the Environment and the Cuban National Center for Protected Areas, along with U.S. partners including University of California, Santa Barbara’s Bren School of Environmental Science and Management, University of Colorado, Boulder, World Resources Institute and Washington and Lee University, to kick off a major new initiative to develop and implement a national strategy for the application of environmental economics to Cuba’s marine and coastal areas.

Interestingly, Cuba’s “Law of the Environment” requires that its environmental ministry “… direct actions intended to promote the economic evaluation of biological diversity.” Cuba has a handful of dedicated environmental economists who have had to adapt to an ever-shifting economic landscape that is comprised of dizzying combinations of socialist and capitalist elements. The work of one Cuban environmental economist, Tamara Figueredo, helped support the Cuban government’s decision to establish Gardens of the Queen as a national park in 2010. Our team is now working with Tamara to perform an economic assessment focused on the possible expansion of the marine reserve within Gardens of the Queen National Park.

We believe that helping Cuba apply the principles of environmental economics will serve to “future-proof” the country’s strong environmental legacy against future economic pressures by providing it with the tools and information necessary to demonstrate the economic value of its resources in their natural state. Such studies, though limited in Cuba, have already demonstrated that protecting large marine areas can be more valuable to the economy than commercial fishing, thanks to Cuba’s growing ecotourism sector.

Just over the horizon lies the first day of Cuba’s post-embargo existence. It is our fervent hope that on that day and those that follow, Cuba avoids the well-worn path that too many nations followed over the past half century, at the expense of too many of their environmental treasures. By considering the economic and cultural value of some of the last remaining vibrant marine ecosystems in the Caribbean, Cuba has a unique opportunity to continue on a truly sustainable path. In a country where boundless Cuban ingenuity keeps Chevys running for more than 60 years, we have faith that Cuba’s people will find a way to ensure that their pristine ocean ecosystems endure for centuries to come.