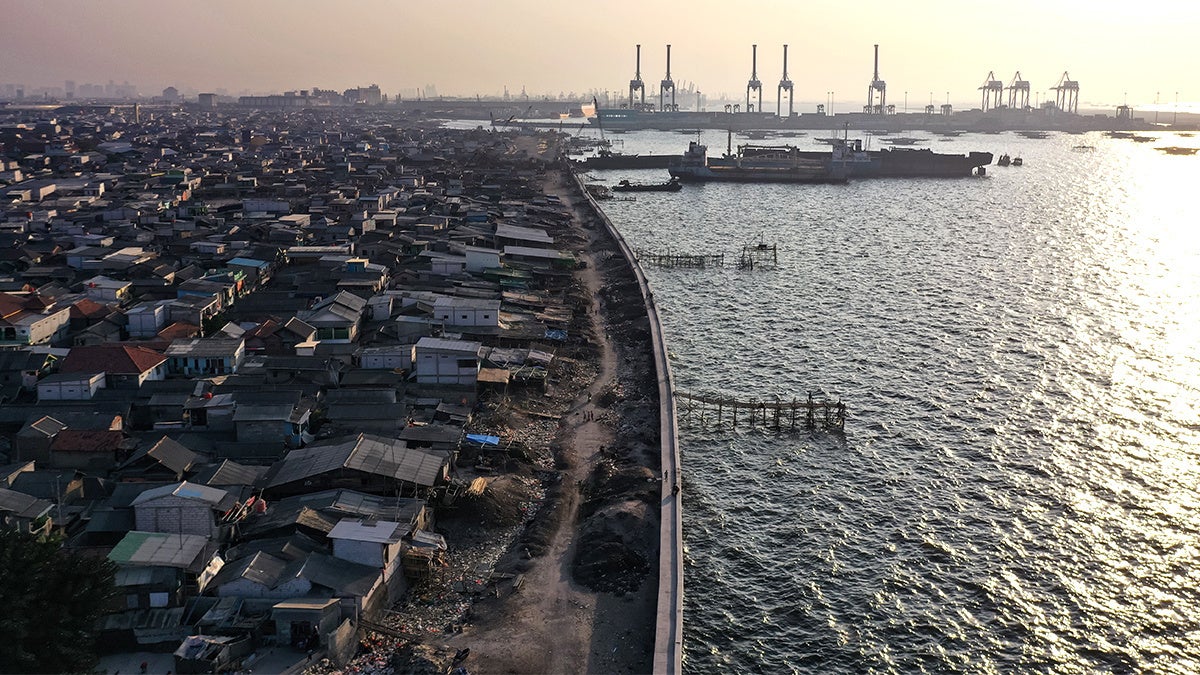 A sea wall divides houses and the waters along the north Jakarta, Indonesia coast in this photo taken on July 12. BAGUS SARAGIH / AFP / Getty Images

World Water Week kicked off this week in the shadow of a frightening reality that nearly one-fourth of the world’s population is living under extreme water stress and in just five years, half the world’s population will live in water-stressed regions, according to the Weather Channel. The dire scenarios circle the globe, from New Mexico to New Delhi.

The misuse of groundwater in Indonesia is so grave that the capital city, Jakarta, is sinking, prompting the president there to move the seat of government to Borneo, as CNN reported.

In light of the pressing need to replenish the world’s clean water systems, the 29th annual World Water Week started in Stockholm with the theme Water for Society: Including all. The event, which aims to draw the world’s attention to water-related challenges around the world, is hosted by the Stockholm International Water Institute (SIWI) and supported by the United Nations water programs. UN-Water publishes the annual World Water Development Report.

“Many in our societies are not aware of the vital role that water plays in realizing prosperity, eradicating poverty and tackling the climate crisis,” said Torgny Holmgreen, SIWI’s executive director in a press release. “Together, we can change that perception and unlock the potential of water-related solutions.”

The meeting rooms teem with ideas and solutions as more than 260 sessions will be held over the six days of the conference, which includes more than 3,000 representatives from 100 countries, as the Weather Channel reported.

“We have the methods and the technology, but need the momentum to make them work,” said Dr. Jackie King, Stockholm Water Prize Laureate 2019, according to a press release.

One area of focus this week is how large corporations consume water and what they can do to reduce their excess usage. The textile industry took the spotlight on the opening day, acknowledging outsized water use in its manufacturing. Cotton, for example, is a thirsty crop, and, it takes nearly 1,000 gallons of water to make just one pair of jeans, according to Lisa Hook, who works on sustainability for Gap Inc., as Reuters reported. She also acknowledged that her industry adds about 20 percent of the pollution in fresh water sources, especially in developing countries where labor is cheap and pollution standards are lax.

“Gap Inc. sees water as a human right,” said Hook to Reuters. “We can’t do business where there is no water.”

Coca-Cola is turning to new technologies that clean bottles with air rather than water. It is harvesting rainwater at its plants. It’s also looking to create new wetlands and to put back into nature an equal amount of water as it uses by next year, according to Reuters.

“Water is the absolute heart of our business. If we don’t have water, we don’t have a business — full stop,” said Liz Lowe, the company’s British sustainability manager, to Reuters.

PepsiCo has also taken the mantle of providing clean water to people in need. It has already delivered clean drinking water to more than 20 million people and teamed up with the Safe Water Network, Water.org, China Women’s Development Foundation and the 2030 Water Resources Group of the World Bank, according to Forbes.

PepsiCo has also partnered with the Inter-American Development Bank to help support infrastructure projects in Latin America where nearly 230 million people do not have access to clean drinking water, as Forbes reported.

“At PepsiCo, we believe that access to safe water is a fundamental right — no matter where you live, no one should be left behind,” said Roberta Barbieri who works in sustainability at PepsiCo, according to Forbes.