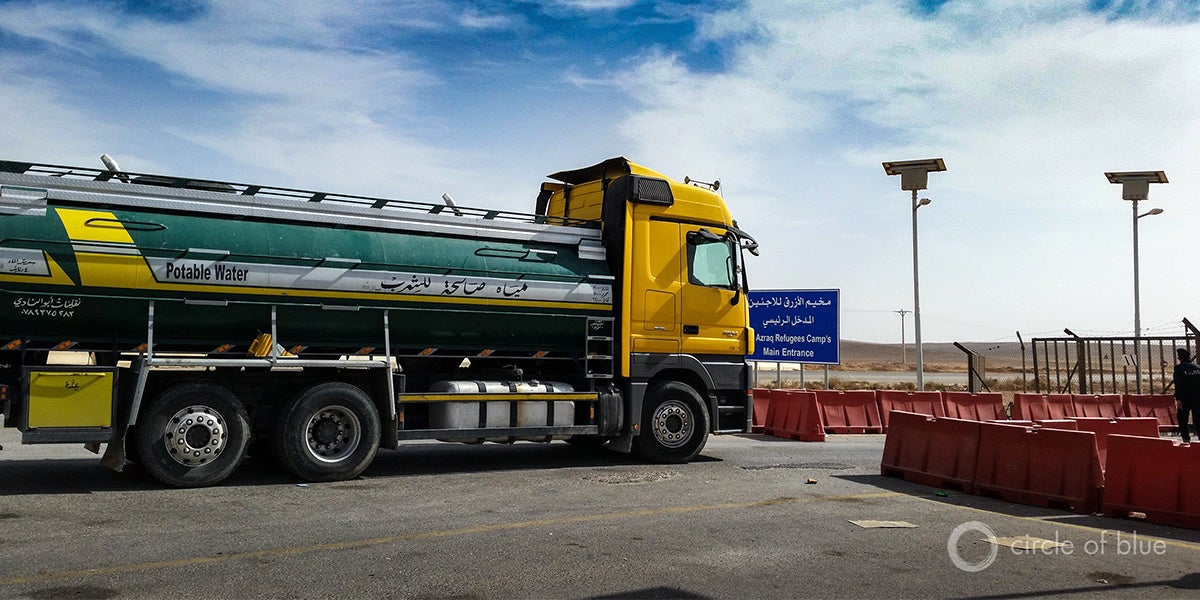 Behind barbed-wire fences at this camp in northern Jordan, about 33,000 Syrians—half of them children—exist uneasily, housed in rows of rudimentary shelters that barely protect them from the winter cold.

Drinking water must be brought in daily by dozens of tanker trucks or pumped from desert boreholes that overexploit Jordan’s largest groundwater basin.

As in Jordan, the world’s refugee crisis, which is intimately linked with water availability both in the homelands that people escape and in the camps where they find shelter, is large and growing. Some 66 million people—a France-sized population—are displaced.

An estimated 28,300 refugees a day across the globe flee conflict and persecution, the relief agency UNHCR said. Fifty-five percent come from just three countries: Afghanistan, South Sudan, and Syria, which the World Bank says has endured the largest refugee crisis since World War II with more than half the country’s pre-war population having left their homes since 2011.

Now, with many Syrians in their seventh winter of displacement, hosting and supporting 650,000 registered refugees costs the Jordanian government almost $900 million a year, according to Oxfam. To help, non-governmental organizations supply water and relief groups visit to offer aid. Celebrities and royalty tour the camps on occasion.

Zaatari is the biggest refugee camp in Jordan, opening in 2012 close to Syria’s border and now housing 79,000 Syrian refugees. Azraq, 50 miles southeast, was built on unused desert land after Zaatari swelled beyond capacity just a year after opening, to more than 156,000 people. With high summer temperatures, cool winters and blowing desert sand, conditions at both camps challenge the mind and body.

Zaatari’s corrugated shelters take a beating in the sun and heat while its water supply and wastewater disposal are constant concerns. The UN said at least 82 water trucks a day fill the camp’s water tanks so that 950,000 liters of water a day can flow to some 76 taps. Boreholes also provide 3.2 million liters of drinking water a day, giving camp residents access to about 20 liters a day, or 5 gallons per person. This allotment is used for bathing, cooking, cleaning and drinking.

Built as a temporary camp, Zaatari now functions like a city with 12 districts, hundreds of shops, a police station, mosque, schools, and health clinics. Water and wastewater networks were constructed by the humanitarian group ACTED.

A treatment plant purifies about 80 percent of the wastewater generated in the camp. A UNICEF grant led to the upgrading of 1,300 private toilets by ACTED. Hand-washing sinks and toilets for the disabled were also built to address complaints of unsanitary living conditions.

Both camps were visited in November by the non-profit Atlantic Humanitarian Relief group led by its Syrian-American founder, Humam Akbik, a Harvard-trained pain-management specialist from Damascus now based in Cincinnati. The international group of physicians, nurses, dentists and pharmacists worked almost without stop from morning to sundown. They came at their own cost, brought their own instruments and supplies to refugee camps and clinics that sometimes lacked sinks with running water or a clean toilet. They provided free exams, minor operations, dental services, medicine, and even psychiatric help to traumatized orphans. 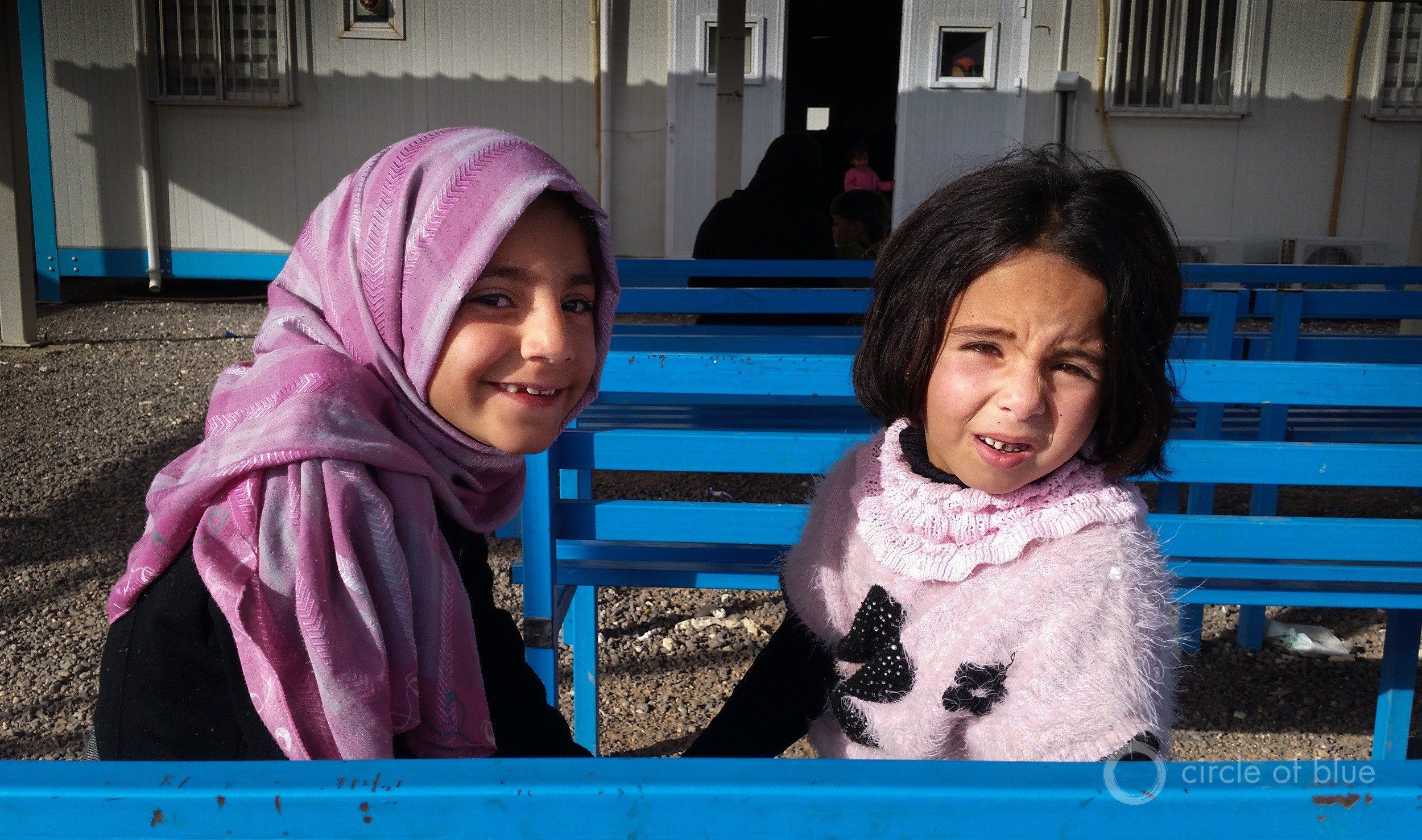 “Water was a big problem,” said Rowena Milligan, a physician who took part in the humanitarian mission and traveled from the UK. “You couldn’t wash your hands before/after examining patients so could only use alcohol gel, which isn’t ideal.”

At refugee camps, clinics and random camps in northern Jordan from Ajloun to the outskirts of Amman and Azraq, volunteers played with the children, painting their faces and engaging in games. Play activities “help take their mind off things,” Akbik said. “Helps these kids feel like kids again.”

Worrisome Trends for Climate and Migration

Security experts have warned for years that a drying climate in the Middle East, Sahel, and other mid-latitude regions will set up conditions of environmental stress for the countries least capable of managing the strain. At least 25 percent of the planet, including Jordan, will experience serious drought and desertification within three decades if attempts by the Paris agreement to curb global warming aren’t met, according to the journal Nature Climate Change.

Those who choose to leave face peril on the journey. The International Organization for Migration says more than 3,100 migrants lost their lives last year drowning in the Mediterranean Sea, and 390 more from Jan. 1 to Feb. 4, 2018, compared with 257 for the same period in 2017, as they attempted the dangerous crossing from North Africa to southern Europe. It’s the fourth year in a row that the death toll surpassed 3,000.

And in Asia, Rohingya Muslims have drowned trying to escape state-sponsored violence in their homeland of Myanmar. At least 670,000 men, women and children have fled to Bangladesh by boat and foot since August in what the UN calls “the world’s fastest-growing humanitarian crisis.”

The Rohingya crisis even prompted a UN video that ended with a plea to better address the refugees’ urgent needs of clean water.

The pleas are founded on evidence of infection. At the informal Rohingya camps in southeast Bangladesh, water pumps next to open sewers have stoked fear of disease outbreaks, and led to vaccination, clean water and sanitation drives. At the Kutupalong refugee camp extension, 20 tube wells were added. So were almost 120 latrine chambers.

In southwestern Algeria, Sahrawi refugees exiled by Morocco more than three decades ago are using what little water they have in newly efficient ways: growing soil-less hydroponics in solar-powered container units. At five remote camps near Tindouf, trays of barley are now grown for Sahrawi livestock in the Sahara desert through a World Food Programme project.

The Sahrawis have come a long way since eight years ago, when water was trucked in via UNHCR tankers and outhouses were crude holes beside mud-brick homes.

For those in Al Azraq, the hope is that they do not have to put down roots, that they can go home again.

Reporting contributed by Randall Hackley, a former AP and Bloomberg correspondent who has reported from 18 countries and visited refugee camps in Jordan, Algeria, Haiti, Peru, and the U.S.