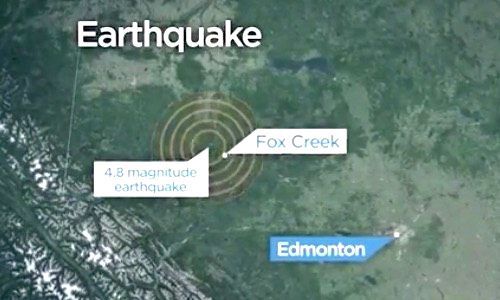 A 4.8-magnitude earthquake has indefinitely closed fracking operations in northern Alberta, an area that has experienced a spate of tremors in recent months.

While it is too soon to tell if the temblor was triggered by fracking, if fracking is indeed the culprit, Canada will once again set a world record for the largest earthquake triggered by the controversial drilling process.

Alberta Energy Regulator (AER) has ordered the shutdown of the site operated by multinational energy company Repsol Oil & Gas, CBC News reported. The regulator automatically shuts down a fracking site when any seismic activity registers above a 4.0.

“The company has ceased operations … and they will not be allowed to resume operations until we have approved their plans,” AER spokeswoman Carrie Rosa said.

A statement from Repsol confirmed that Tuesday’s earthquake occurred during fracking operations.

“Repsol immediately shut down operations and reported the event to the AER and other local authorities,” the statement said.

“The company is investigating the event, which includes reviewing and analyzing available geological and geophysical data, as well as the onsite seismic monitoring data. Operations will not resume at this location until a full assessment of the event has been completed and approval has been received from the AER.”

Jeffrey Gu, associate professor of geophysics at the University of Alberta, explained to CBC News that the area surrounding Fox Creek has seen hundreds of quakes ranging between 2.0 to 3.0 in the last six months. There were two two fairly large quakes in the area, including a 4.4 in January 2015, Gu said. He added that it was “highly probable” the earthquakes were caused by fracking.

Alberta’s provincial energy regulator also said at the time that the quake was likely caused by hydraulic fracturing.

No injuries or property damages were reported from the temblor, although some residents in the area felt shaken.

“I thought it was just a forklift backing into the wall,” St. Albert resident Ken Munroe said in the video below.

Canada has the dubious honor of holding the world record for the largest fracking-induced earthquake. Last month,

British Columbia’s energy regulator confirmed that a 4.6-magnitude earthquake that struck the province in August was caused by fracking.

According to Food & Water Watch, earthquakes caused by fracking itself are usually smaller and less frequently felt than earthquakes produced from underground injection control wells. The alarming spate of tremors in Oklahoma, for instance, are very likely caused by the disposal of large quantities of fracking wastewater into underground wells.

“The AER has been engaged in a review of fracking, in particular as it relates to this issue, and I’ll be asking them to speed that review … to come up with some recommendations that we can consider sooner than later,” Alberta Premier Rachel Notley said.