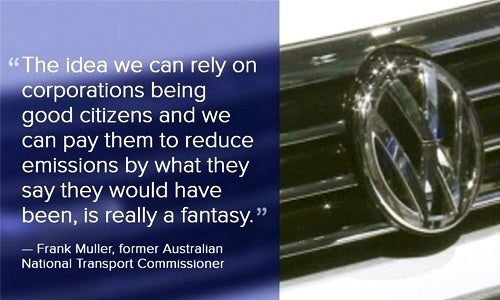 Again and again we hear about corporations doing bad things so they can make more money: polluting, selling contaminated food or otherwise harming people’s health, selling products that injure people or just don’t do what they advertise, tricking and scamming people out of their money, selling banned goods or providing financial services for terrorists or drug cartels and so many other things that are not good for people or society.

https://twitter.com/abc730/status/647344322371710976 fined Volkswagen $120,000 after finding that the company had installed devices intended specifically to shut down a vehicle’s pollution control systems. In 1974, Chrysler had to recall more than 800,000 cars because similar devices were found in the radiators of its cars.”

“Beyond emissions, the industry has long been contemptuous of regulation. Henry Ford II called airbags “a lot of baloney” and executives have bristled at rules requiring higher mileage per gallon.”

VW might not even be the only company that is scamming government testing labs with “defeat mechanisms” right now. From the report,

“We call it the tip of the iceberg,” said Jos Dings, the director of Transport and Environment. “We don’t think this will be limited to Volkswagen. If you look at the testing numbers for the other manufacturers, they are just as bad.”

The Times report lists several examples of the auto industry engaging in profit-making by endangering their customers. There was the “unexploded Pinto” problem of gas tanks blowing up. There were 271 deaths from the Ford-Firestone tire scandal. There were the Takata airbags that either don’t work or injure people. There was Chrysler selling as new cars that had been driven for 60,000 miles with the odometers disconnected. Click through, there’s plenty … But no one has been put in jail.

So what VW was caught doing is “not an isolated incident” and, in fact, VW had already been caught doing the same thing in the 1970s.