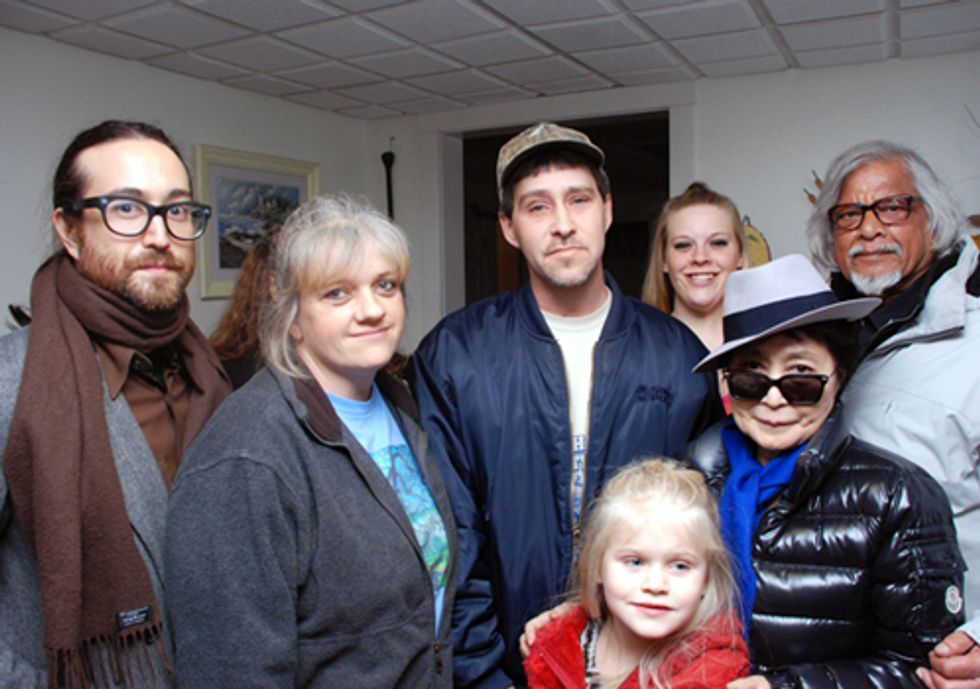 [Editor's note: On Jan. 17, Artists Against Fracking co-founders Yoko Ono and Sean Lennon were joined by actor Susan Sarandon, peace leader Arun Gandhi, filmmaker Josh Fox and activists to lead members of the press on a bus tour of fracking sites in Susquehanna County, Pennsylvania. Here's a video featuring the visit and Yoko Ono's reflection on the visit.]

After being invited to visit Pennsylvania by residents who have experienced the impacts of fracking, my son Sean and I decided to go see the harms of fracking up close. Our friend Susan Sarandon came with us, and we had the incredible honor of being joined by Mahatma Ghandi’s grandson, Arun Ghandi, as well. We also invited members of the media.

Driving into the quaint town of Montrose, PA, I could hardly have anticipated how upsetting the next stops on our tour would be: a gas pad of four drills and a hissing pressure release, a giant compressor station under construction, large trucks full of sand and toxic chemicals rumbling down narrow dirt roads, and a drilling rig reaching to the sky.

To see such a beautiful landscape ruined was disturbing enough, but not nearly as bad as the heart-break of meeting those whose health, homes and lives have been forever changed because of fracking: Vera Scroggins, Craig Stevens, Rebecca Roter, Frank Finan, Ray Kemble and the Manning family. They welcomed us into their homes with complete hospitality, and Tammy Manning even baked us delicious muffins.

And they told us their stories. How they can no longer drink the water from their own wells because they have been poisoned by fracking pollution. These American families are suffering from suddenly not having clean water for the essentials of healthy living. They are not able to use their well water to drink, cook with, wash dishes, bathe or do laundry. They are buying water every day. Can you believe it?

They cannot move to a healthier place to raise their families because the value of their house plummeted when the water went bad and they cannot afford to relocate. They have to open their windows when they run the water to prevent methane gas from building up and risk explosion. It is a terrible fate, and there is no way to reverse what has happened to them. And it is outrageous that the gas companies accuse these honorable, defenseless people of lying we saw the brown smelly water ourselves in homes right next to fracking sites. The fact that the water was nasty brown around their houses really scared me.

As we toured fracking sites in this once beautiful rural area and visited homes throughout the day, I reflected on the frightening reality that this dirty practice could soon destroy other families and homes in New York if Gov. Cuomo lifts the ban on fracking.

After that tour, I have never felt more compelled to prevent others from facing the harm I saw in Pennsylvania last week. And after being followed around all day by industry representatives who yelled threats at us, I have also come to realize how much is at stake. We cannot allow people, clean water and the health of our climate and planet to be sacrificed for the gas industry.

I hope that Gov. Cuomo will take the same tour that I did before he makes any decisions about whether to allow fracking in New York. And though it is too late to stop the harm that has already come to Susquehanna County, Pennsylvania, I hope that Gov. Corbett of Pennsylvania will visit the same families and sites that I did, and stop the industry from running rough-shod over that beautiful state.

I urge President Obama to make that trip too and put aside any notion of depending on fracking instead of truly clean energy. As industry documents prove, these wells crack and leak, more and more over time. It cannot be prevented and once it happens, it cannot be fixed thousands of feet under the ground. Please, go see for yourselves.

It was a staggering realization that this is now happening in the USA … the country of power and wealth. Why is this national tragedy being kept quiet? Why aren’t any politicians doing anything about it? These families, on top of their terrible fate, are subjected to nasty rumors that they are not people to be believed. It is not only destroying their lives but their spirits as well. I was there. I saw it. It made me cry.