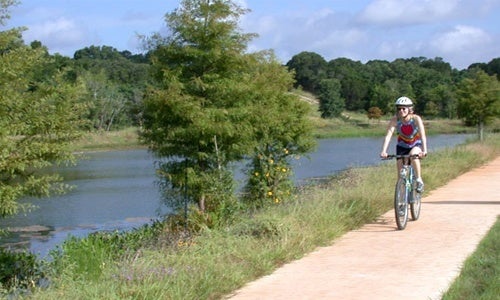 Emma DiPasquale is a rising senior at John Carroll University. She studies English and environmental studies and hopes to pursue a masters degree in English literature with focus in environmental theory. Emma worked as an intern at EcoWatch last summer.

It was a cold winter evening in February when citizens gathered at University Heights Public Library, as they had and would again at key locations around Cleveland’s east side, dreaming of a network of bike trails and hiking paths connecting their parks and open spaces. In a small room across the hall from a noisy children’s reading nook, poster boards and stickers were set up for community members to share their input on where they would like to see new on-and off-road trails for what’s officially being called the Eastside Greenway project. 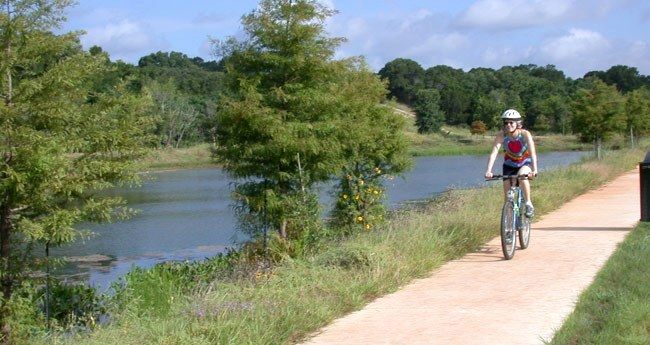 The Eastside Greenway project would connect the east side of Cleveland with 19 Greater Cleveland municipalities through a unified trail network. Photo credit: Georgetown Parks and Recreation

Generally, a greenway system refers to an open space or natural areas that are linear in form. Cities down south and out west have developed these systems in recent years for different purposes that align with their needs.

Greenways take on different sets of characteristics depending on the goals established for it, according to the Georgia Department of Natural Resources. They can be for recreation, conservation, restoration, water quality improvement and environmental education. The Eastside Greenway is planned for recreational purposes, which includes activities such as bicycling, jogging, running and walking.

The Georgia Department of Natural Resources states that the benefits of greenway systems are multitudinous. Greenways can promote healthy living in that they encourage more exercise among users. Since a recreational greenway allows for many different uses, it attracts a wider audience with varying preferences in terms of what types of exercise they will use the trails for.

Greenways also provide environmental advantages, including improving air quality by decreasing the number of greenhouse gases emitted because of the alternative transportation routes. Economic improvement is also a factor, as greenways increase property values because of the added green space, which in turn increases tax revenue, helping to filter money through local governments.

Greenways are important in developing communities because they provide a means of getting from place to place without a car: to school, a friend’s home, the library, a restaurant or work, to name a few destinations. They are safer alternatives to streets because they separate the user from automobiles and they also provide a more aesthetically pleasing atmosphere for the user.

The Eastside Greenway project promotes this idea of linking various neighborhoods to different locations throughout communities. The project seeks to connect the east side of Cleveland with 19 Greater Cleveland municipalities through a unified trail network that will link neighborhoods to a variety of destinations and existing green spaces such as the Metroparks reservations of Acacia, Euclid Creek, Lakefront and North Chagrin.

The project began back in the summer of 2012, according to Anna Swanberg, project manager for LAND Studio. At the time, Kirby Date, a student at Cleveland State University’s Maxine Goodman Levin’s College of Urban Affairs, was doing community outreach work near Forest Hills Park in East Cleveland. Date was interested in the idea of a unified greenway system, considering the somewhat close proximity of Forest Hills Park to Euclid Creek Reservation. Date presented her ideas to the Cleveland Metroparks Board of Commissioners. Coincidentally, her proposal was overheard by LAND Studio, a non-profit developer of Cleveland’s urban parks. LAND Studio decided to expand the project, and placed Swanberg on the project that summer.

Swanberg, who is experienced in landscape architecture, has been involved in every stage of the planning process including leading a scoping study in 2012 and 2013 regarding the areas included in the greenway project. The study came to a close in 2013 and it was decided that a more formal plan was needed. Swanberg, with LAND Studio, partnered with the Cuyahoga County Planning Commission to receive a Transportation for Livable Communities Initiative grant from the Northeast Areawide Coordinating Agency to conduct a planning study for the Eastside Greenway in 2014 and 2015. 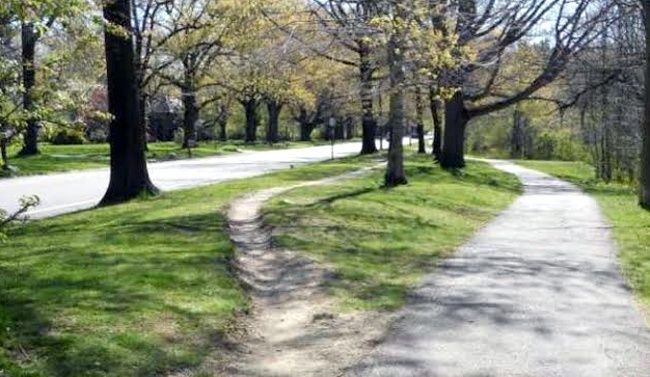 The planning process will result in specific trail recommendations across the east side, suggested trail locations and a strategy for moving forward into design and implementation of these trails in the master plan, according to Swanberg.

Swanberg’s other duties included identifying communities to include in the project, engaging those communities to get them on board, identifying missing links in these communities and, more recently, publicizing the meetings held by the Eastside Greenway partners LAND Studio, SmithGroup JJR, Michael Baker International, Cuyahoga County Planning Commission and Northeast Areawide Coordinating Agency.

Currently, many trail segments are already in place on the east side, but they lack critical connections, according to the Eastside Greenway website. Linking all the trails would make inter-community connections, provide safe, alternative means of transportation, decrease the need for cars and other vehicles, and improve quality of life for a broad group of people, says Swanberg. Today, approximately 30 miles of trails are already in place. When completed, the Eastside Greenway will link about 60 miles of trails.

At the February public meeting in University Heights, Neal Billetdeaux, senior landscape architect for the architecture, engineering and planning firm SmithGroup JJR, and Nancy Lyon-Stadler, traffic and planning manager at Michael Baker International, kicked off the program with a PowerPoint about the project.

Several maps outlined existing and potential new trails, demonstrating the full extent of this interconnected network. The maps showcased existing trails, missing links and secondary connectors, which provide on- and off-street connections between the major green spaces that already exist to destinations such as job centers, community services and commercial areas. Connecting this system could be as simple as adding different types of bike lanes to certain roads, or as extensive as building off-road, multi-use trails.

A variety of bike path options were also pictured in the presentation. These included shared-lane markings, or sharrows, which are markings placed in the center of a travel line to indicate that a cyclist may use the full lane. Bike lanes were also pictured, which are paths that are not separated from roads. Protected bike lanes, which are separated from roads, were pictured as well. Protected lanes are more expensive since they use posts, curbs, grass or parked cars to keep the bike lane away from traffic. 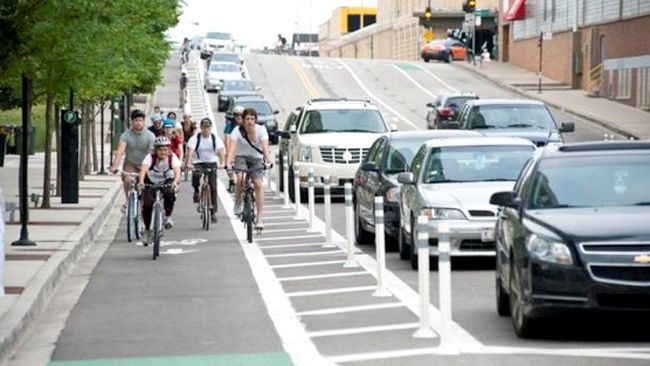 A 2012 study done by Portland State University by Jennifer Dill, a professor of urban studies and planning, analyzed these types of trails and their users. Dill found that about 57 percent of Portlanders would like to ride bikes more, but are simply afraid to ride among cars. The study found that protected bike lanes help to diminish fear among this group of potential path users.

“Information on these types of bike lanes is the kind of evidence that helps us, in terms of what to present to potential Cleveland users,” Billetdeaux commented. He mentioned Roger Geller, bicycle coordinator for Portland’s Office of Transportation, and his paper, “Four Types of Cyclists,” as helping the Cleveland project’s planners understand which types of bikers use which types of trails.

Billetdeaux said he anticipates that protected bike lanes will play a large role in Cleveland’s new greenway system. “In terms of the missing link segments, we are really hoping to create off-road trails. We know we won’t be able to get that everywhere, so we are planning on creating protected bike lines in the areas we can’t get off-road trails. We are trying not to do anything less than that.”

“For the secondary connectors, we are thinking about more varied paths,” he added. “We could start with protected bike lanes, and go down to regular bike lanes and sharrows from there.”

Billetdeaux cited Atlanta, St. Louis and Minneapolis as specific examples of greenways systems that have influenced the plans for Cleveland. In the works since 1991, Atlanta’s greenway system, or PATH Foundation, has seen success in terms of bridging the gaps between different communities and have seen improvements in bringing people together from all races, ages and income levels. Atlanta’s network of trails continues to grow as its citizens look for safer ways to exercise and connect with their neighbors. Overall, the PATH Foundation says it has encouraged health and well-being, promoted public safety and increased real estate values. This system has shown what Cleveland is working towards and ultimately hopes to achieve, said Billetdeaux.

The project has some other goals that are not as clearly visible, such as fixing up vacant properties, working with communities and their existing plans to add trails in their areas, and including environmentally friendly buildings and facilities into the plan.

The Cuyahoga County Board of Health, along with LAND studio, Cuyahoga County Planning Commission and Human Impact Partners, did a health impact assessment to help in the planning process. The formal definition of health impact assessment, according to the World Health Organization, is a combination of procedures, methods and tools that systematically judges the potential, and sometimes unintended, effects of a proposed project, plan or policy on the health of a population and the distribution of those effects within the population. Health impact assessments also try to identify ways to manage those effects.

The Cuyahoga County Board of Health representative highlighted the target areas for this health impact assessment during the meeting, noting that the overarching focus was equity. The assessment centered around three main ideas: crime or fear of crime, social cohesion and transportation, and physical activity and safety.

The health impact assessment came up with several recommendations to ensure equity. Establishing neighborhood watch groups, ensuring good geographic distribution of facilities, incorporating play or recreation areas, creating an education campaign and a comprehensive greenway management plan were a few of the recommendations.

“We have never had the opportunity to work with a health impact assessment for evaluation,” Billetdeaux said. “Empirical data will help us in our planning process. The only downside with this is that a lot of people who attended the meetings didn’t seem to understand the connection or importance of the health impact assessment. We are trying to make this clearer in our next round of public meetings.”

The feedback during the Feb. 3 meeting was sometimes skeptical, but overall the communities were very supportive of the concept, according to Lyon-Stadler. There were a lot of questions from a diverse audience, but ultimately, the meeting provided the last bit of feedback the partners needed to take the next steps. For now, those next steps are to refine prioritization methods, which means the partners will determine which trails are the most important, given the community feedback from the meetings and an online survey, while keeping in mind the original goals of the project.

The partners shared a master plan at the public meetings held this month, and by July 2015 a final plan will be complete, according to Lyon-Stadler. “This is by far my favorite project I’ve worked on,” said Swanberg. “I’ve been pleased with the overwhelmingly positive reaction from the community members. I know they’re excited to see this plan finished and begin to see some development in their neighborhoods.”

Lyon-Stadler, another project partner and big-time cyclist, says she has ridden most of the study area on her bike, which she believes gives her a different perspective. “This project has been very fun,” she says. “Working on projects like these is definitely one of my favorite things to do professionally because I’m out there. I appreciate having the parks and the green space and the opportunity to be out in nature and breathing and moving, so if I can make that easier for others that is hugely rewarding.”